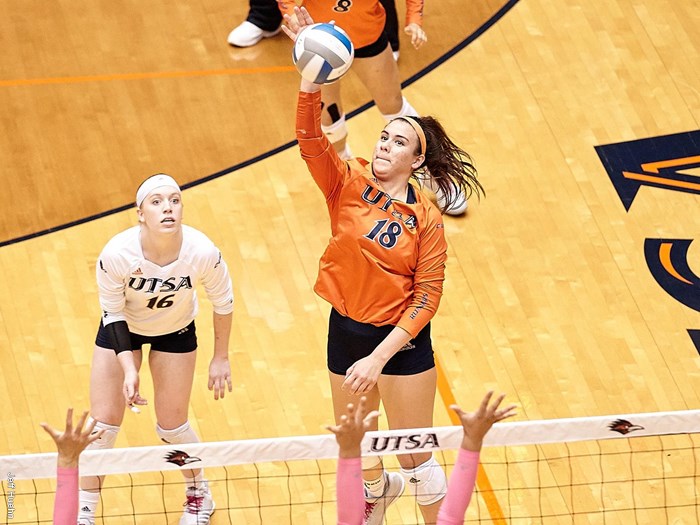 SAN ANTONIO — Sitting a half-game shy of second in the Conference USA standings, UTSA volleyball will conclude its regular-season road schedule, traveling to face Louisiana Tech on Friday at 7 p.m. CT before venturing to face Middle Tennessee on Sunday at 12 p.m.

UTSA (16-7, 8-3 Conference USA) looks to finish the 2018 regular-season schedule strong with matches at LA Tech and MTSU, before hosting UTEP to conclude the home slate. The Roadrunners are in third place in the C-USA standings, with Rice (10-0) and FAU (8-2) owning the first two spots.

The Roadrunners have totaled 13.9 kills, 13.2 assists, 1.4 aces, 16 digs and 1.8 blocks per set as a team in 2018. UTSA has been paced by freshmen Kirby Smith and Hannah Lopez, with Smith owning the lead among C-USA freshmen with 3.11 kills and 2.97 digs per set. Lopez averages 2.94 kills and 1.9 digs per set. Juniors Brianna McCulloch and Kara Teal have been weapons, with McCulloch owning 2.81 kills per set and Teal sporting 2.36 kills per set with a .324 hitting percentage.

Louisiana Tech (6-20, 1-10 C-USA) will be seeking to snap a 10-match losing streak entering the weekend. The Lady Techsters have wins over six wins on the year, including two vs. SWAC schools, and a four-set win over MTSU.