The Conference Carolinas Tournament isn’t the first to start up – which was the MIVA and MPSF – but it is the first to get going this week with matches starting tonight. That sets up a three-round event this week with an NCAA Tournament bid on the line. The first round tonight takes place at the higher seed with the final four teams remaining moving on to the site of the highest remaining seed – which if they win would be King. 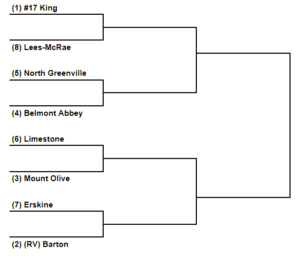 The two teams that split the regular season Conference Carolinas title are obviously the favorites to win this tournament once again. King may have the slight edge because they would be at home, where they won (as opposed to a road loss), but also the Bulldogs have the experience advantage after winning this even last season while King was upended in the semifinals. In terms of their paths to setting up a third meeting in the Conference Carolinas Championship, King has to go through a pair of teams (in Lees-McRae and the winner of the #4/#5 match) that they won every set against this season. Barton meanwhile would have a bit tougher road, especially if they take on Mount Olive in the second round who took Barton to five sets in one of their previous two meetings. These two should be on a collision course though as by far the two top offenses in the league.

The Trojans went 0-4 against King and Barton combined this season, but 11-1 against everyone else. If they can add to that mark against the rest of the league then they will likely get another crack at one of the co-league champions in Barton. They actually played the Bulldogs a bit closer among the two, as they went 3-6 in sets compared to a 2-6 mark against King – although they had a match against both that went to five sets. That means that if they can muster up enough offense to come near King or Barton, their stellar serve (tops during Conference Carolinas‘ play) and solid defense gives them a chance to legitimately break through the seal and knock off one or both of the projected favorites.