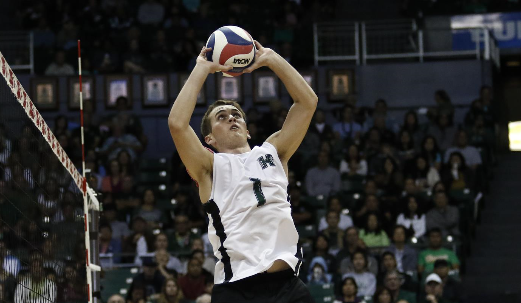 Hawaii's Joe Worsley averaged 10.50 assists and 2.00 digs per set, while setting the team to a .277 hitting effort in a split against No. 1 Long Beach State en route to VolleyMob Player of the Week honors. Current Photo via Hawaii Athletics

This week’s VolleyMob Player of the Week was involved in one of the biggest wins of the week and helped his team go toe-to-toe with one the No. 1 team in the country on both Friday and Saturday.

Hawaii’s Joe Worsley averaged 10.50 assists and 2.00 digs per set, while setting the team to a .277 hitting effort in a split against No. 1 Long Beach State. The junior setter posted a 54-assist, 12 dig double-double and added four kills and two blocks as the team hit .237 in a five-set loss on Friday. The Moraga, California, native notched 51 assists, eight digs, four blocks and three kills as team hit .328 in a five-set win, handing LBSU its first loss of the season.

Averaged 4.75 kills and 1.75 digs per set, while hitting at a .607 clip in a four-set road win over No. 5 Pepperdine; notched 19 kills, seven digs, three blocks and two aces, while hitting .607 in the MPSF Quarterfinal match