The MIVA semifinals are later today, so check out VolleyMob's preview of the action ahead. Archive Photo via MIVA

Last week the MIVA Tournament started and we gave our MIVA Tournament preview for the start of everything and in the quarterfinal round. Now that we have progressed to the last four teams in the semifinal round, we give out a new preview getting you ready for a clash of a quartet of top 10 teams competing for an automatic bid to the NCAA Tournament. 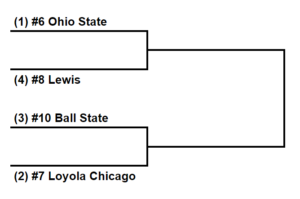