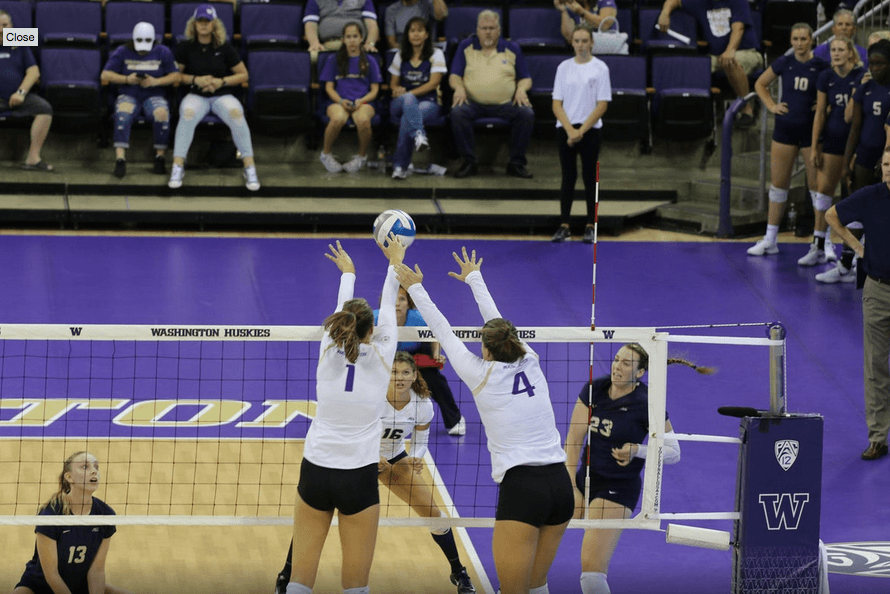 Huskies move to 5-1 in win over Cal Poly. Archive Photo via Washington Athletics

Both teams looked strong in the match, but the Huskies’ front row was able to put up better numbers on the night for the win. The Mustangs hit .292 on the night with 49 kills, while Washington pounded 52 kills on a .362 clip. The Huskies also out-blocked Cal Poly 12-4.

Set 1 was a back and forth battle for the first half, until Washington broke away to reach a score of 20-13, eventually winning the set 25-20. The Huskies had a 21-17 lead in set two, but the Mustangs caught up at 22-22. A Washington block would clinch set 2 at 28-26. Washington broke away early in set three with a 7-3 lead, and built upon that until Courtney Schwan put away the final ball to win 25-17.

Schwan paced the Huskies with 14 kills, while Carly Dehoog and Destiny Julye added 11 a piece. Dehoog hit an impressive .550 on the night with zero errors. The Van Winden sisters led the offense for Cal Poly. Sophomore outside hitter, Torrey Van Winden, contributed 19 kills with a .351 hitting percentage and junior outside hitter, Adlee Van Winden, added 10 kills.

Defensively, Cal Poly out-dug Washington 48-30. Leading the back row for the Mustangs with 11 digs was junior libero, Katherine Brouker. Tia Scambray, senior libero for the Huskies, led Washington in digs, also with 11. Scambray has been a six-rotation player for the past three seasons.

This was the first time that the Huskies have defeated the Mustangs, although the teams have not met since 1982.

The Husky offense found the rhythm it had been seeking tonight and rode a balanced attack to a big 3-0 win over a previously unbeaten Cal Poly team. Washington (5-1) hit .362 with senior Courtney Schwan showing off her array of shots for a team-high 14 kills and senior Carly DeHoog adding 11 without a miss.

The 1,427 in attendance at Alaska Airlines Arena saw the Dawgs open up strong and then pull out a dramatic second set, before outhitting the Mustangs (5-1) in the third to close it out, 25-20, 28-26, 25-17. It was the second win of the day for the eighth-ranked Huskies, who also swept Seattle U. in a 12 noon match.

“We had a lot of nice things going on particularly with our sideout offense,” said Head Coach Keegan Cook. “We did a nice job of making it tough for them to keep up with us offensively. It’s not every night that a team hits almost .300 on you and you win in three sets.”

The Mustangs did hit .292 against the Dawgs, led by 19 kills from Torrey Van Winden, but UW had a higher percentage in each set and finished up at a season-high .362. The Dawgs had 12 blocks to four for Cal Poly, and had a 5-1 edge in aces, while the Mustangs had 48 digs to 30 for UW.

“Playing really clean volleyball made up for some other areas we weren’t great,” said Cook. “We finished with 12 blocks, but they still hit almost .300, so we’ve got to clean up our back row defense behind it.”

Junior Destiny Julye was big on offense with 11 kills on a .321 mark, and Marion Hazelwood finished five without a miss on 13 swings for a .385 percentage while adding six blocks. Lauren Sanders also had six blocks and eight kills. Senior setter Bailey Tanner distributed 37 assists and had six digs and four blocks plus three kills on five attempts. Senior libero Tia Scambray had 11 digs and added four assists.

The Huskies took the first three points of the match with Tanner dumping for a kill on the third rally. Destiny Julyeposted her first kill off the block’s touch for 4-1. Cal Poly tied it at four but Lauren Sanders hit down an overdig to snap the 3-0 run. Washingtonput together three straight to go up 9-7 as Schwan and Julye found the floor and DeHoog scored the first block of the night. Julye crushed a transition set from Schwan for an 11-8 advantage. DeHoog floated an ace to the deep corner and down for 13-9 Dawgs. Washington got to 15-10 on a Sanders kill and a CP error and the Mustangs called the first timeout. Schwan went up the line to open space for a kill and then Tanner had another dump on two for a 17-11 edge. Hazelwood had a quick kill and then teamed with DeHoog for a stuff on the next point for 20-13. DeHoog landed her first two kill from the right pin to keep the Huskies siding out with an eight point lead. The Mustangs scored three straight to cut into the lead late and UW took its first timeout at 23-18. Julye had a clutch kill through the block on the left to get to set point at 24-19. Cal Poly saved one but Schwan and Sanders teamed up for a rejection on the next point to get the Dawgs the set, 25-20. Washington outhit the Mustangs, .353 to .229, with five kills from Julye and four blocks to none for Cal Poly. Schwan also dug five in the set.

DeHoog buried a rightside swing in serve-receive to start set two and a Sanders quick strike from Tanner made it 3-1. Schwan tooled the block and then a roof was thrown up by Tanner and Sanders for a 5-1 lead. Another stuff for 6-1 from Sanders/Schwan prompted an early Cal Poly timeout. Scambray had a phenomenal dig to keep a rally going that Hazelwood and Schwan ended with a block for 8-2. Tanner went to Julye for an explosive swing from the back row to snap a Mustangs run for 9-5. Schwan dropped an ace short to make it 11-7 and then Hazelwood and DeHoog got the block up again for a second-straight point. The Mustangs closed the gap to one at 14-13, but Julye got the sideout through the block from Tanner. The lead went between one and two for several points, Schwan putting two to the floor, until DeHoog scored in transition to push the lead back to three at 19-16 and Cal Poly used its last timeout. Out of the break, DeHoog got another on the right to fall for 21-17. The lead disappeared in frustrating fashion, as Cal Poly ran around to save and send over a free ball but Sanders was blocked trying to hit it down, and on the next rally UW let a dig drop with nobody stepping in to set it, and the Huskies took timeout at 22-22. Out of the break, Julye made a tough set work out of system, getting it down for 23-22, but Cal Poly answered off the block. In serve-receive, Schwan tooled the block on the left for set point at 24-23. The Mustangs saved it and Schwan earned another chance with an offspeed kill. Again Cal Poly answered, and Schwan terminated from the right for 26-25. Washington had several swings at that chance but Cal Poly dug them and converted, and then Julye found the deep corner to earn a fourth set point. That one proved to be the charm, as Julye and Sanders swung to the left pin and sent the Mustang swing straight down for the block and the clincher, 28-26. All told, the Dawgs hit .300 in the set compared to .278 for the Mustangs, with Schwan putting away six including the three big swings late, while DeHoog had five kills on 10 swings without a miss.

Cal Poly took the first point of the third but UW grabbed the next four on Julye’s serve, as Schwan put one away from the back row, Tanner killed an overpass and Julye drove an ace off the defense for 4-1. Tanner and Hazelwood combo’d for a stuff on the right pin and then DeHoog put away an overdig for 7-3 and Cal Poly called for time. The teams traded sideouts, with DeHoog saving a tight set with a wipe off the block for 10-6. DeHoog’s serve was then overpassed and Sanders went up to put it away for 11-6 and that forced the second Mustangs timeout. Cal Poly scored two out of the break but Schwan responded with a back row roll shot for 12-8. Hazelwood dropped one over the block for the sideout at 14-10, and then a wild rally was ended by DeHoog from the right for another point that fired up the crowd. Hazelwood snapped another Tanner quick set down for 17-11 and then Schwan had a short serve shanked for an ace for 18-11. Tanner one-handed a tight set to Julye and she hit sharp to the sideline for 19-13. Washington continued siding out efficiently late in the set, answering each Mustang point, and then a big stuff block from Tanner and Hazelwood got UW to match point at 24-17. Schwan’s first swing was blocked back but she covered it herself and on a Scambray set she turned one up the line for the final kill to end it, 25-17. It was an offensive slugfest in the fourth, as Cal Poly hit .400 but the Huskies were just a bit hotter at .429, with Schwan killing five and Sanders and DeHoog both going 4-0-7 in the set.

The Huskies now take to the road for a long nine-game stretch and won’t be back home until they’re four matches into conference play. Washington starts off in Malibu, Calif. next week taking on Missouri State and Pepperdine in a double-header next Friday.

As a team, Cal Poly had 56 digs and seven blocks in the match.

“I like the fact that we found out we can compete in and win close matches,” Cal Poly head coach Sam Crosson said of the win.

It was the Mustangs’ fifth match in a row without losing a set.

In front of a mostly Washington crowd, Cal Poly battled hard each set. It was a back-and-forth first set before the Mustangs ultimately lost 25-20. In the second set, despite falling behind 6-1 early on, Cal Poly rallied to get back in the set. The Mustangs fought off four set points Washington had before losing a heartbreaker 28-26. Cal Poly continued to battle the Huskies in the third set before falling 25-17.

Sophomore outside hitter Torrey Van Winden had a season-high 19 kills in the match, also tying her career high. Adlee Van Winden had 10 kills. Nelson led the Mustangs in assists with 38.

“Torrey Van Winden had an overall very good match for us,” Crosson said. “Her serving, her attacking. She really stepped up to the occasion.”

The Huskies (5-1), were paced by senior outside hitter Courtney Schwan with 14 kills. Carly Dehoog and Destiny Julye had 11 kills apiece. The Huskies were strong defensively, blocking 12 of Cal Poly’s attacks.

“I thought our floor defense and effort was really good. Washington is a really tough team that has a lot of good athletes with really good arms,” Crosson said.

Two Mustangs were selected to the All-Tournament team. Torrey Van Winden, who had a combined 50 kills in 3 games, and Taylor Nelson, who had 102 assists for the tournament.

The Mustangs will stay in the Pacific Northwest as they prepare for the Nike Classic in Eugene, Ore. next week. They will play the host school, No. 14 Oregon to open tournament play Thursday. First serve will be at 6 p.m. That will be followed by Duquesne on Friday and Wichita State on Saturday.