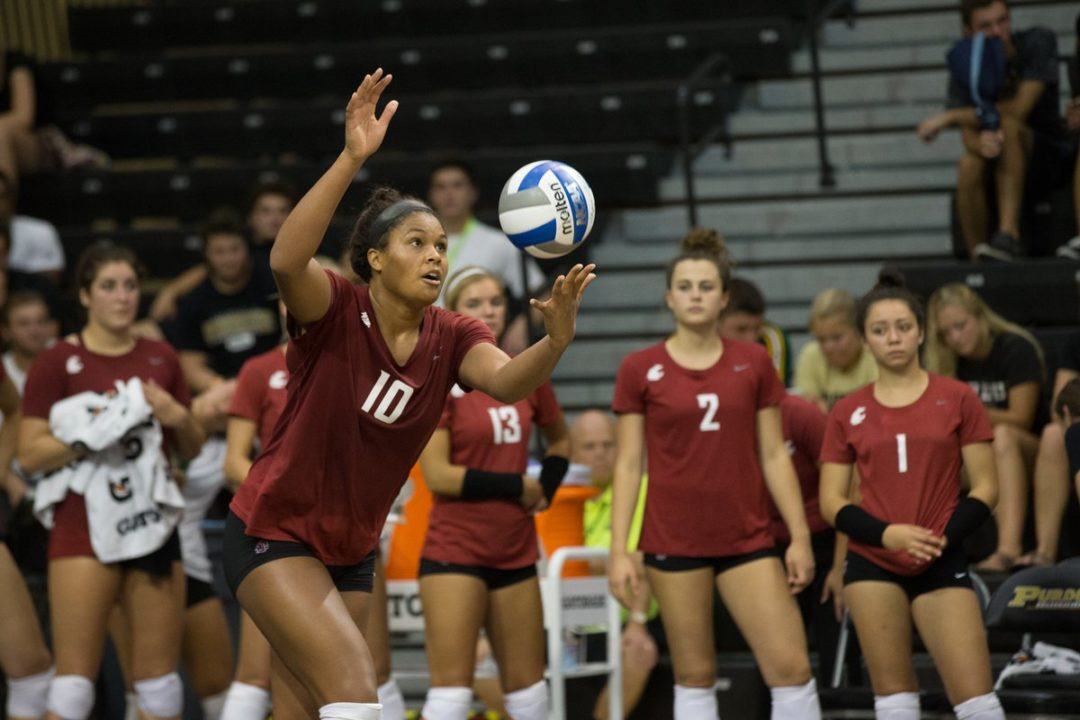 While the rest of the country kicked off the 2017 season on Friday, Washington State had to wait until Sunday to make its season debut, which it did with a four-set victory.  Current Photo via Washington State Athletics

WASHINGTON D.C. – While the rest of the country kicked off the 2017 season on Friday, Washington State had to wait until Sunday to make its season debut. The Cougars did so with a four-set win over American University, despite trailing the Eagles in kills, aces and digs.

The Cougars hit at a .333 clip in Set 1, which saw the teams tie 13 times. After a knot up at 11, Washington State pulled away with a 4-0 run, including two Eagle errors. American countered with a 6-2 run to pull back even at 17. Aleksandra Sochaka carried the team with two kills and two blocks. The teams went on to tie at 20, 21 and 22, before two Mims putaways gave WSU its first set-point try at 24-22. A pair of errors and a McBride kill stopped three Cougar set-point efforts, but a service error and Woodford kill capped the 27-25 victory.

Washington State led 8-5 early in Set 2 behind three blocks. American grabbed the lead at 11-9 with a 6-1 run including four WSU miscues. The Cougars seized the lead at 16-14 with six of the next eight points as Schoenlein posted two kills and Mims turned in two blocks and a kill. The teams split the next 10 points, but an ace by Urias and another Schoenlein putaway stretched the margin to four at 23-19. A service error made it 24-21 and Mims ended the stanza two points later.

Kazala came out on fire for AU after the intermission, racking up four kills and two blocks as the Eagles surged ahead 10-3 to start Set 3. American pushed the advantage to 10 at 22-12 with a 7-1 run. Lajos stopped the Eagles momentarily with a pair of kills, but three more points, including kills by Kazala and Helena Elbaek followed to close out the 25-14 AU win.

WSU closed out the match with a .364 hitting effort in the final stanza, but it wasn’t pretty throughout as the Cougars fell behind 12-5 early on. Donahue served up three straight aces and added three kills in the stretch. Washington State regrouped and countered with a 12-2 run to turn the deficit into a 17-14 lead of its own. Woodford, Lajos and Schoenlein turned in kills, while Mims served up two aces in the rally. The Eagles weren’t done yet, however, taking a two-point lead of its own (21-19) with seven of the next nine scores. Trailing 23-21, WSU scored three straight with help from two AU errors to earn its first match-point try. Kazala thwarted the first effort and Elbaek and McBride stopped the next two attempts. A Claire Martin kill and an Eagle miscue finally capped the set and match at 28-26.

WSU, winner of its 27th season-opening match in the last 31 years, was led by junior Ella Lajos and senior Casey Schoenlein with 10 kills each, and they combined for nine blocks. Lajos hit .529 in the match with only one error in 17 attacks and was instrumental in the fourth set comeback win that sealed the match victory. Redshirt sophomore Jocelyn Urias led the match with seven blocks and added five kills with no errors in seven attacks. Junior Taylor Mims added nine kills, four blocks and two aces.

WHY & HOW…
WSU Head Coach Jen Greeny said, “American is a fantastic team: well-coached, disciplined and you could tell they’d played a couple of matches before ours. We give a lot of credit to them.

“We are working on things with people in new positions and trying to get the kinks out but I was pretty pleased overall with our middles especially. Ella Lajos and Jocelyn Urias did a really nice job and hit really well. Our passing was streaky to say the least so if we can settle down and get a little more comfortable back there I think we’ll be okay.
“There was a lot of pressure at the end of the sets and I thought we handled it like a veteran team. We can’t have too many sets like set three tonight where the wheels came off so we need to clean that up.

“We need to be a little more consistent, especially in serving, and have that consistency be at a higher level than not. I thought all three setters did a pretty good job; there were a couple of miscommunications but that happens in the early season matches. We need to work on our tempo and locations a little more as well.

“We’re excited to get right back out there (against Howard tomorrow night) and try and get better.”

Junior MB Ella Lajos said, “A difference in our season this year versus last year is our lineup and positional changes. We have different hitters playing different positions than what we played last year. I think this will be a great advantage because other teams will have no idea what to expect. How I went into the match tonight was to come out swinging and no matter what, stay aggressive and have passion to win with my teammates.”

Aleksandra Kazala posted her third double-double in four matches with 18 kills and 11 digs, but Washington State earned a four-set volleyball victory over American University in the annual Bender Blue Out match.

The Eagles fell to 1-3 on the season, while the match was the first of the new year for the Cougars. WSU came into the match having received votes in the preseason coaches poll after tying for fifth in the Pac-12 Conference.

Vela McBride finished with 11 kills and five blocks for AU, which also got six kills and five service aces from Meaghan Donahue off the bench. Kennedy Etheridge had 39 assists and four blocks, with sophomore libero Kristen Largay finishing with 19 digs.

Ella Lajos and Casey Schoenlein had 10 kills each for WSU. Ashley Brown had 19 assists and 12 digs, with Jocelyn Urias tallying seven blocks.

American plays next weekend in Boston at the Harvard Invitational. AU faces Sacred Heart on Friday, Sept. 1 before playing Stony Brook and the host Crimson on Saturday.

American’s next home match is Tuesday, Sept. 5 at 7 p.m. against Morgan State.