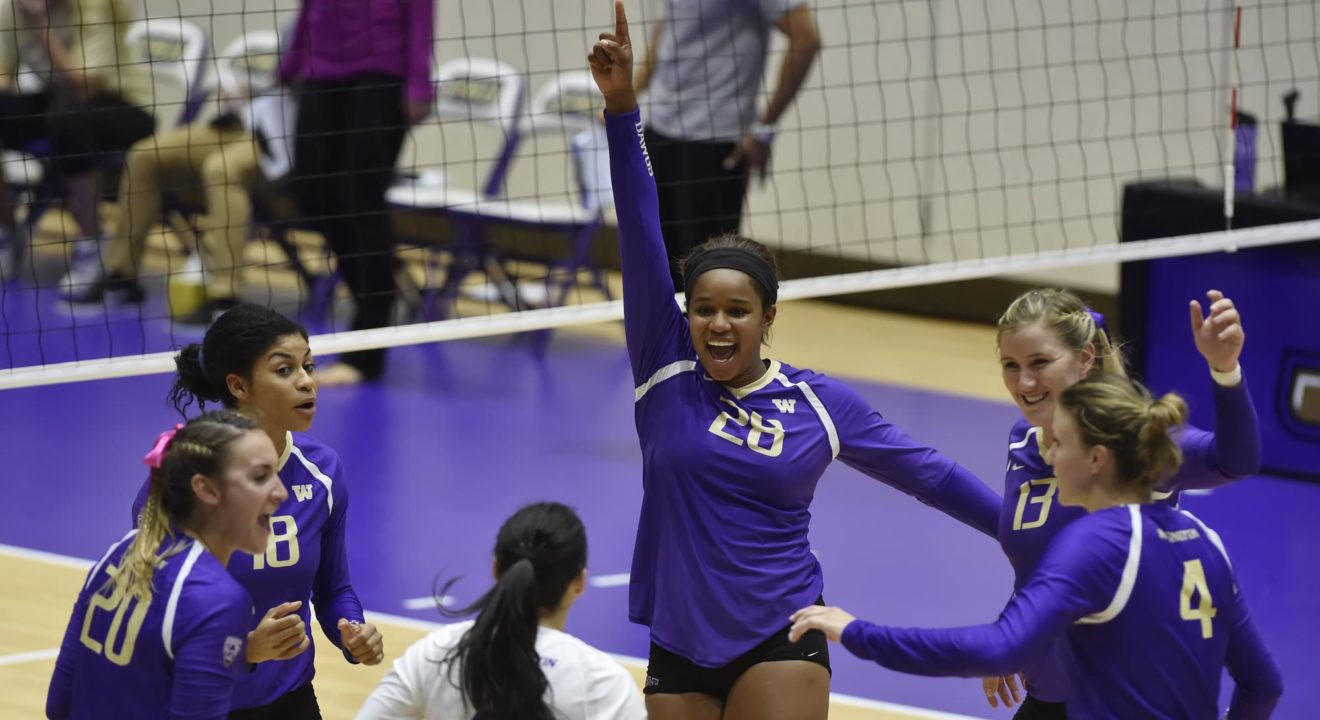 Senior Crissy Jones thrived in the new rotation with the freedom to hit out of the middle on Wednesday. Archive Photo via Washington Athletics

A balanced effort saw the Huskkies lead all of the statistical categories, including a 7-5 advantage in blocking and a 6-3 advantage in service aces.

The Huskies, in spite of their easy win, didn’t have any players in double-figure kills. Courtney Schwan just missed a double-double with 9 kills (.200 hitting percentage) and 10 digs, while Crissy Jones had an errorless 9 kills (643 hitting percentage) and 5 digs to her credit. Each contributed aces (Schwan 1, Jones 2); and blocks (Schwan 1, Jones 2) to the team effort as well.

Washington employed a new strategy on Wednesday, moving to a 5-1 with senior Bailey Tanner setting the entire match (and recording a kill, 3 blocks, and 39 assists). While the overall product was positive, there was one statistical downside. Washington sophomore outside hitter Kara Bajema was mostly kept at bay after being shifted to hitting from the right side in Wednesday’s game. The Huskies have a pile of offensive firepower this season, and Bajema had been putting up big numbers in the back half of the conference season before Wednesday’s 6 kill, 5 error outing. She was in double digits in 4 of the team’s prior 5 games, hitting .274 in those games. Bajema is a player who thrives on opportunity, having her best outings typically when she gets the most swings. She only got 19 on Wednesday, and combined with a new position, that resulted in just an .053 hitting percentage.

The Huskies also shifted Crissy Jones to a middle-hitter type role, which allowed her to hit audibles at will. That’s where the payoff came from – with a monster stat-line from Jones.

“We talk about trying to get the big things in place, first of all with our serving, trying to get six servers in there we feel good about, and I think we’re there with this group,” head coach Keegan Cook said of the inspiration for the change. “We talked about offensively can we get the right number of balls to the right people, and so I liked what Crissy Jones was able to do tonight, Carly paired up with Bailey was going pretty well for us too.”

Washington will finish their regular season on Friday at home against arch rivals Washington State (the Huskies won 3-1 in their first matchup of the season). A win there would lock up a 3rd-place finish in the Pac-12, which is usually enough to ensure a top-10 national seed.

SEATTLE – Solid in all phases, the 12th-ranked Husky volleyball team rolled to a straight set win this evening in their one and only meeting of the year with the Arizona Wildcats. With 2,343 fans on hand at Alaska Airlines Arena, the Dawgs hit .310 for the match and topped Arizona, 25-16, 25-19, 25-17.

Washington (23-7, 13-6 Pac-12) will now look ahead to Friday night’s Senior Night against Washington State where it will pay tribute to a huge and accomplished class of seven seniors. First serve for the final match of the regular season will be 8 p.m. but Senior Night tributes will begin at approximately 7:40 p.m.

Husky Head Coach Keegan Cook went with a new look lineup tonight, with senior Crissy Jones starting at middle blocker and the Huskies running a 5-1 with Bailey Tanner setting all six rotations. Tanner had a great match with 39 assists, three blocks, and her 200th career kill, and Jones was dominant in the middle with nine kills on a .643 attack percentage with a pair of aces and five digs.

Senior Carly DeHoog had eight kills and two blocks, hitting .571, and Courtney Schwan also had nine kills and 10 digs with an ace. Senior libero Tia Scambray dug 16 with an ace to lead a Husky defense that held Arizona to .155 hitting for the match. UW had six aces to three for UA, and led in digs (47-43) and blocks (7.0-5.0).

On what inspired the switch, Cook said, “We talk about trying to get the big things in place, first of all with our serving, trying to get six servers in there we feel good about, and I think we’re there with this group. We talked about offensively can we get the right number of balls to the right people, and so I liked what Crissy Jones was able to do tonight, Carly paired up with Bailey was going pretty well for us too.”

“Bailey did a nice job and Tia handled a good number of balls and was solid in serve-receive,” said Cook. “We got some big things in place, but I’d like to see us play some more intense defense. Some of that could be playing next to new people, but just finding the right intensity is key.”

A tough serve from Kara Bajema forced an Arizona error for 2-0 in the first set. Carly DeHoog had the first Husky kill for 3-1. Schwan slugged one crosscourt for her first kill and a 5-3 lead. Jones floated an ace home for 7-5. Schwan had a teardrop over the block for 10-7 Dawgs and Arizona took timeout. The Wildcats got a couple kills out of the break but DeHoog tooled the block to retain the lead and then Scambray laced an ace for 12-9. A nice transition back set from tanner to Jones was finished for 15-10. Shayne McPherson had a great up and Tanner found Schwan on the pipe set for a big swing, making it 18-12 and forcing the final Arizona timeout. Out of the break, Lauren Sanders connected on a slide kill, and then Jones fired another ace to push it to 20-12. The Cats scored three straight but Tanner ended that run by throwing one down for her 200th career kill. An Arizona error and another DeHoog crosscourt kill from the right made it 23-15. Bajema’s first kill got UW to set point and the Huskies got their first block on the next point to end it, 25-16. The Huskies hit .385 in the set with DeHoog rolling to five kills on six swings without an error and Tanner firing 12 assists.

The teams traded kills for several rallies to start the second set until Bajema hammered two in a row down from the left to give the Huskies a 6-4 lead. Sanders teamed for a block with Tanner and then put a quick set from Tanner down to make it 9-6. Jones capped a long rally with a kill high off the block for 11-7 and the Wildcats called timeout. Jones and Schwan met in the middle for a block out of the break for 12-7. McPherson lined two straight aces to extend to a 15-9 lead and force Arizona’s final timeout. Schwan went off the block in transition on the next point for 16-9 before Arizona snapped the 4-0 Husky run. Sanders and Tanner blocked one back for 19-13 Dawgs and then Sanders teamed with DeHoog for a second-straight stuff and the 20th point. At 22-15, Arizona fought back with a 3-0 run and forced the Huskies to take time up four. Out of the break, Scambray pancaked a short serve and DeHoog tooled the block, and an Arizona error got the Dawgs to set point at 24-18. The Wildcats saved one but Schwan hammered from the left to end it on the next point, 25-19. The Dawgs outhit Arizona in set two, .351-.257, with Jones putting away four kills on five swings, and Tanner assisting on all 16 Husky kills in the set. Scambray also dug six in the set.

Sophomore Avie Niece came in to start in the middle in the third set. Schwan killed an overpass and then hit another from the left in transition for 3-3. Jones and Schwan pounded two more kills to push the Huskies up, 6-5. The teams continued trading points with Niece putting away her first kill for 9-8. Niece had another middle slam and Arizona left one short for 11-8 and the Wildcats called time. Destiny Julye was in to serve and Tanner then went to her out of the back row and she hammered off the block and out for 12-9. Julye had another back row kill to make it 15-11 and the Wildcats used their last timeout. Arizona used a couple Husky errors to score four straight out of the break and tie things back up at 15-all. The Huskies responded with a run as Schwan dropped an ace short and Jones and Tanner blocked one on the right side. Schwan’s tough serving kept it going with a couple Arizona errors making it 20-15 before Arizona snapped the five-point run. Julye got herself a block on the left pin for 23-16 Dawgs and then she won a joust after a tough Jones serve was overpassed to reach match point. Arizona made UW wait one point, but Niece finished on the next chance to seal it, 25-17. UW hit .216 in the last set and Arizona finished in the negatives with -.029. Julye and Niece both had three kills in their one sets of work.

Freshman outside hitter Paige Whipple led Arizona with nine kills in the match, five of which came in the second set. She had seven digs as well. Classmate Candice Denny had five kills on .375 hitting to go along with a team-high three blocks.

Both offenses were hot out of the gates, with Washington hitting .412 on its way to a 25-16 victory in the first set.

Whipple had five kills in the second set, but they were not enough as the Huskies took the second, 25-19.

The Huskies led the third set wire-to-wire, winning 25-17 to close out the match.

Arizona, which fell to 10-18, 4-15 Pac-12, will host Arizona State on Saturday at 7 p.m. for senior day in McKale Center. UA will honor seniors McKenzie Jacobson, Jade Turner and Kimberly Gutierrez before the match.