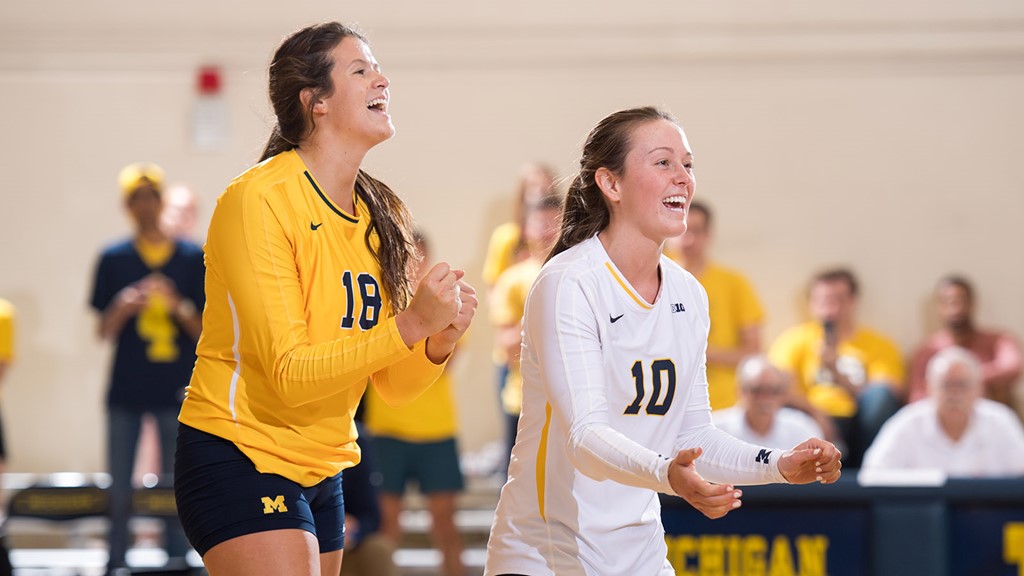 (RV) Michigan earned its second-straight victory over #17 Purdue in less than a week, this time in West Lafayette, Indiana. Current Photo via Michigan Athletics

WEST LAFAYETTE, Ind. – (RV) Michigan won its 20th match of the season for the third season in a row in a hard-fought four-set victory over #17 Purdue (25-23, 22-25, 30-28, 25-20). The win also marked a season sweep against Purdue, as the Wolverines knocked off the Boilermakers Saturday evening as well. It was also the signature win Michigan (RPI: 30) needed; it was UM’s first road win against a ranked opponent this season. For Purdue (RPI: 25), they remain in the predicted NCAA Tournament field, but their opening two rounds became that much tougher, with a home contest against #11 Michigan State looming on Friday. Michigan wraps up their regular season schedule at Indiana (12-18, 1-17 Big Ten) on Friday evening.

Purdue led in most statistical categories on the night, leading Michigan in kills (61-59), blocks (11-5), digs (62-53) and hitting percentage (.228-.215). Untimely errors proved costly, and Purdue played catch-up for the majority of the match. The Boilermakers were led offensively by Danielle Cuttino with match-highs of 17 kills and 6 blocks. Sherridan Atkinson continued her red-hot end-of-season clip by adding 16 kills, hitting .250, blocking 6 balls and digging 5. Blake Mohler rounded out the double-digit kill performers with 14 kills and hit .300 with 3 blocks. Setter Ashley Evans dished a match-high 52 assists and filled the stat sheet further with 9 digs, 4 kills (.667), 3 blocks and 3 aces. Evans, in her defensive prowess in this match, became the only Boilermaker in program history to record 3,000 assists and 1,000 in her career. Libero Brooke Peters led all defenders with a match-high 19 digs.

WEST LAFAYETTE, Ind. — A team-high 15 kills from Claire Kieffer-Wright as well as double-digit kill efforts from Katherine Mahlke and Carly Skjodt propelled the University of Michigan volleyball team to a 3-1 victory (23-25, 25-22, 30-28, 25-20) over the Purdue Boilermakers on Wednesday night inside Holloway Gymnasium.

The win is also Michigan’s second straight over Purdue, as the teams faced each other on Saturday (Nov. 2), with the Wolverines taking the victory by a 3-1 score for their first win over the Boilermakers since 2010.

Kieffer-Wright led the Wolverines with 15 kills at a .429 attack averge, while Mahlke finished with 14 kills at a .345 clip. Skjodt also added 13 kills and came up just short of a double-double with nine digs.

Though Michigan took an early 3-0 lead on a kill by Mahlke and back-to-back Purdue attack errors, neither team could gain any momentum in the first set, which featured eight ties and four lead changes. Purdue led late at 22-20, but a kill by Kieffer-Wright pulled the Wolverines within one and a kill from Lambert evened the score at 22. Back-to-back Michigan points then put the Maize and Blue up, 24-23, and forced a Boilermaker timeout, but a Purdue attack error gave the Wolverines set one, 25-23.

Despite back-and-forth play to begin the second set, the Wolverines took a slight edge at 15-14 before a 7-0 run gave Purdue a strong 21-15 lead. From there, Michigan was unable to string together more than two points, and the Wolverines totaled just 11 kills and were held to a .108 hitting percentage, while the Boilermakers hit at a .281 clip. Back-to-back kills from Mahlke staved off two set points, but Purdue took set two, 25-22, to even the match.

The Boilermakers took an early lead in the third set, but the Wolverines fought to come from behind and tie the score at 11. Purdue then went on 4-0 run, forcing a 15-11 lead and coercing a Michigan timeout. The Boilermakers continued to lead until an ace by Welsh tied the score at 19, and a Purdue error put the Wolverines up, 20-19. From there, the teams played point-for-point before a back-row kill from Skjodt gave Michigan a two-point edge, but Purdue rallied to tie the score at 24. The score was tied four more times from that point on, but a kill by sophomore outside hitter Sydney Wetterstrom and a Purdue attack error gave Michigan set three, 30-28.

Michigan jumped out to a 15-11 lead in the fourth set thanks to four kills apiece from Mahlke and Kieffer-Wright, which caused Purdue to take a timeout. Michigan extended its lead to five at 17-12 on a kill from Skjodt, and took a seven-point lead at 21-15 which forced Purdue to call its final timeout. Using a .412 team-hitting percentage and five kills from Kieffer-Wright, the Wolverines used the momentum to take the fourth set by a 25-20 score and execute the season sweep of the Boilermakers.

Ashley Evans set the Boilermakers on 52 of their 61 kills with three service aces, nine digs, three blocks and four kills on six errorless swings. Danielle Cuttino, Sherridan Atkinson and Blake Mohler all finished with 10 kills or more and hitting percentages north of .250. Cuttino was the leading point scorer for the match with 20 thanks to 17 kills fueled by a .282 hitting percentage. She accounted for six blocks as well, matching Atkinson who contributed 16 kills and a .250 hitting percentage with five digs. Mohler hit .300 with 14 kills and three blocks.

Azariah Stahl complemented her 13-dig effort with an efficient eight kills, two blocks and a .263 hitting percentage. Brooke Peters was just a dig shy of her third 20-dig effort of the season.