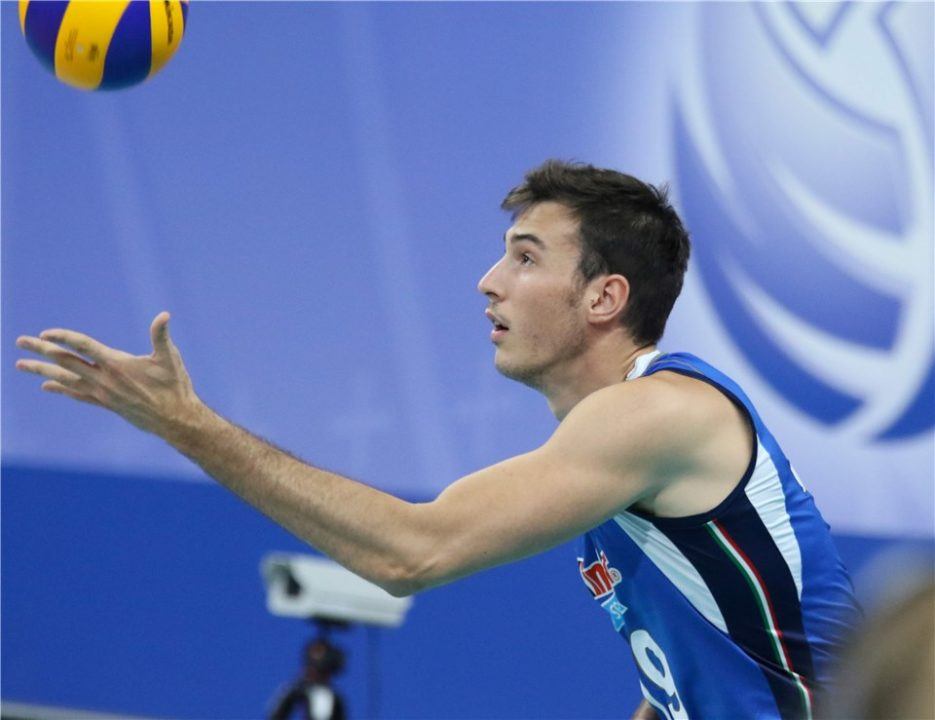 14 points from three players, including Fabio Ricci (above), led Italy to an upset win over Group leaders France. Current Photo via FIVB

A topsy-turvy 2017 FIVB World League was thrown for a loop on Friday with upsets abound as Pool G1 and I1 kicked off competition. Pool H1, which includes the United States, Iran, Poland, and Russia, took a day off as teams traveled from Katowice to Lodz, where the last two sets of matches will be played.

The defending champions Serbia had what looked like an easy path to locking up their place in the Final 6 against Argentina, but the host team fought to the end. Serbia came away with a 3-2 win, which while not the clean sweep they might’ve been hoping for against the last-place team in the group, was enough to clinch their spot in the Final 6. With 6 wins, and only 2 matches to play, they are also assured of a top 3 seed for that final 6 – with the top seed still in play.

France, who were perfect through their first 6 games with 6 wins and 18 points, fell to Italy. The result wouldn’t have been a surprise were it not for recent events – where Italy struggled without many of their stars to a 1-5 World League start and where France was surprisingly dominant without their star Earvin Ngapeth. In his stead, tournament scoring leader Stephen Boyer continued his hot streak with 20 points – extending his lead and raising his average.

Ngapeth returned to the French bench on Friday, as promised by his coach, but didn’t get into the game, and France dropped a 5-setter. They’ve already clinched their spot in Rio, but the result was still a surprising one given recent results.

Elsewhere, Canada pulled a 3-2 win over Belgium to vault into 4th in the World League standings. They now play France and Italy to try and cement their spot in Curitaba for the Final 6 – and after Friday’s results, the outcome of neither of those games looks as confident as it did 24 hours ago. A 3-0 or 3-1 win in either should send Canada to the Final 6.