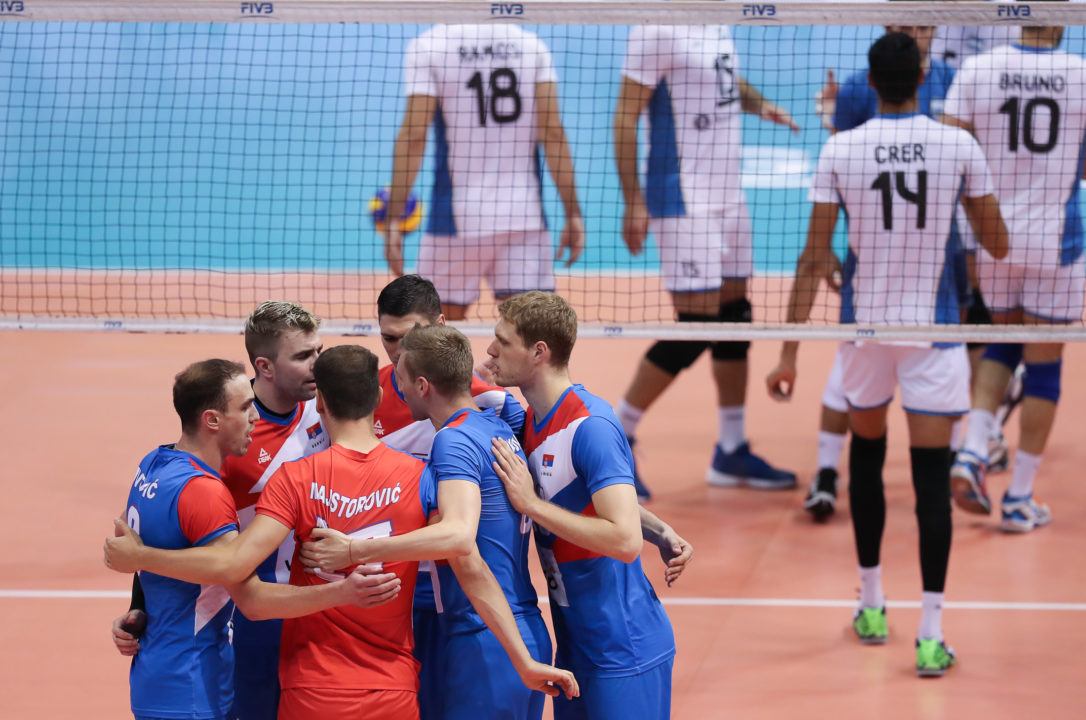 Argentina fought until the end, but an ultimate 3-2 result left Serbia with a secured spot in the Final 6 and Argentina just bragging rights to play for. Current Photo via FIVB

Serbia had to fight hard to earn their clinching win on Friday, but in the 5th and final set, they had enough to top Argentina 3-2. That win seals their spot in the Final 6 that begins in early July in Curitaba, Brazil. Further, it clinches a top 3 seed for them, ensuring them a favorable draw for the playoff.

In the other opening-round matchup, Brazil showed their true force with a 3-0 sweep of Bulgaria. The Brazilians, who as the hosts are assured of a spot in the Final 6, restored their team to nearly full-strength for this weekend’s action, which showed in their first 3-0 sweep of the tournament so far.

Brazil avenged one of just 2 losses in the tournament so far on Friday, hammering Bulgaria 3-0 in Cordoba. Brazil’s 3-0 sweep (75-56 on aggregate points) was their first sweep of the tournament to date.

“We entered the field concentrated and knowing that it was the first time we have our complete roster,” said Brazilian head coach Renan Dal Zotto. “We knew we have to play well; we are aware that the Final Phase in Curitiba is near and we need to play better each time. Argentina-Brazil is always a tough match, there are no favorites. We hope to play with serenity and very seriously, it is another step for us on our road to Curitiba.”

Brazil welcomed back their stars to develop some final team chemistry before the upcoming Final 6 (which Brazil will host).  That includes 6’6″ Wallace de Souza, who was declared the best opposite of the 2016 Olympic Games. In his summer debut, he played in all 3 sets and led Brazil with 15 points – 12 kills, 2 blocks, and 1 ace.

The Bulgarians struggled at the service line, recording just 3 aces as compared to 11 errors. The Brazilians weren’t perfect there either, but with 6 aces and 7 errors, had a decided advantage.

But Bulgaria wasn’t playing with a full deck – opting to rest their star players for the rest of the weekend.

“It was our strategy today to not play with the main players to save some of them because we need two victories this weekend,” said Bulgarian player Nikolay Nikolov. “We know they’re the Olympic champions at the moment, the strongest team of the world, so it was going to be really hard to beat them; that’s why we decided to save power for the next two games against Serbia and Argentina. We’re going to go for those victories and I think they’re possible to reach.”

Those 11 service errors were part of 21 overall for Bulgaria in just 3 sets – giving Brazil nearly 1/3 of their points on errors.

Bulgaria had just one player in double figures – Jani Jelazkov, who scored 11 in two sets. He led the team in both kills (7) and blocks (3), but had 5 hitting errors and 3 service errors for Brazil.

Evandro Guerra, one of the tournament’s leading scorers in the first weekend, was benched for the entire second week of play. He returned to action on Friday with 3 points in 3 sets, playing from the bench in each.

While Serbia was pushed further than anticipated against Group 1 trailers Argentina, thanks to a 15-12 result in the tie-breaking 5th set they got the win they needed to ensure a trip to the Final 6 and a chance to defend their title.

The two sides competed last weekend in Iran as well, where Serbia dominated with a 3-0 victory. Drazen Luburic continued his hot hand for Serbia, scoring 19 points for the second-straight match. He had 17 kills and 2 blocks on the day to just out-pace his teammate and superstar Marko Ivovic with 17.

Serbia only got 1 of its 85 earned points from a bench player, reserve libero Goran Skundric, with its 6 offensive starters accounting for the rest of the scoring.

Argentina was a little more balanced in its attack, but turned to Alejandro Toro in crunch time. After coming off the bench in the first two sets, he started the last 3 and finished with 15 points – including 12-for-21 hitting and 2 aces.

Luciano de Cecco had 4 aces for Argentina – as their service game kept them in a match where they were out-blocked 10-6.

With the loss, Argentina is officially eliminated from contention for the Final 6, though with a home crowd behind them will still have some motivation to fight for their last two games.