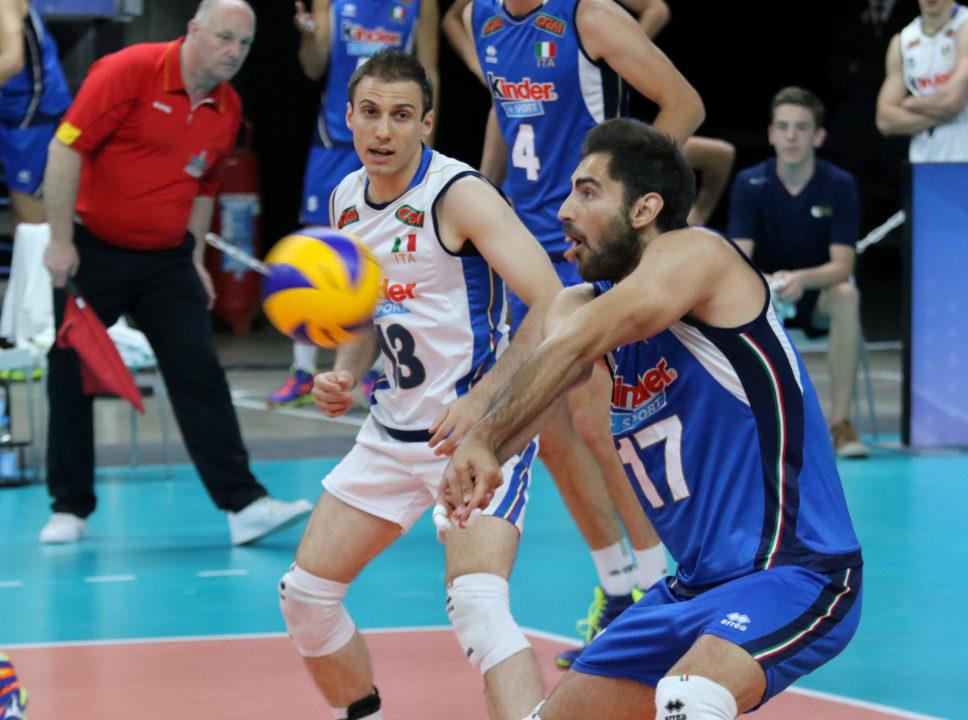 Italy upset France to end their unbeaten streak while Canada won a five-setter with Belgium to open Pool I1 play. Current Photo via FIVB

The first match to open up Pool I1 featured France and Italy – two teams on the opposite end of the table. However, Italy was able to overcome France in five sets, dealing the French side their first loss of the tournament. It didn’t affect either team’s place in the standings, as both France and Italy remain in first and 11th respectively.

Canada-Belgium also went five sets with Canada coming out on top. The win creates an odd scenario as Belgium has more total points than Canada, but one less win. That means Canada sits in fourth in Group 1 with nine points (4-3) while Belgium is in fifth with 11 (3-4).

The day began with an upset from the Italians over the French. Italy came into the match at just 1-5, while France was 6-0. For France, they already have a spot in the final six locked up while Italy is a long shot but now stays alive.

France charged out the gates with a 5-0 lead in the first. A timeout from Italy rejuvenated them enough to climb back and tie at 18. Then, Iacopo Botto drilled one of his four serve aces in the match to give the Italians their first lead. France quickly responded with how they began the set – a 5-0 run. That spurt would be enough to take a 1-0 set lead over Italy.

Set two tilted between both sides as France held an 21-19 advantage late. A kill by Luigi Randazzo, who was one of three Italians with 14 points, followed by one of Fabio Ricci‘s four blocks on the day evened the match. In total it was six unanswered by Italy to end the set with a 25-21 victory and even that match at 1-1.

Set three started out well for the Italians, leading 11-8. France countered with eight of the next 11 though for a 16-14 edge. This time Italy struck back, taking the next four points for a two-point lead of their own. Italy would take a set point opportunity at 24-23. Yet again the tables flipped as France recorded back-to-back kills and Italy had a strike go wide of the court, giving France the third 26-24 and a 2-1 set lead.

After France defeated Italy in four sets in the previous meeting, Italy was familiar being down 2-1. This time though the Italians jumped ahead 12-6 – a lead that would only extend out further to as much as eight (21-13). From there France would take seven of 10, but it was too little, too late as the back row attack of Giulio Sabbi finished off the set to force a fifth. It was just one of six Sabbi points on the night, a contrast to the 30 he scored in his previous outing.

Heading into the fifth, France had already been tested longer than any other team thus far in World League – they had won all six prior matches in three or four sets. They showed no sign of inexperience, jumping ahead 8-5 after Julien Lyneel put the stamp on a 3-0 run with one of his eight points in the match. After switching sides, Italy won seven of 11 to tie the fifth at a dozen. Botto had one of his 13 points in the match to move Italy to 13 as a team in the set after a kill on the next point. The two countries exchanged the next four points until a French attack error ended the match in favor of the Italian side.

Italy recorded four more spikes than France, but lost a 13-point differential from serve aces and attack errors. The saving grace for Italy was their block as they had 15 to France’s six. Luca Vettori (two blocks, 14 points) and Matteo Piano (five blocks) were key in the block domination, along with Ricci.

“I’m so happy with the win and I’m happy for the guys,” Italian head coach Gianlorenzo Blengini told FIVB after the match. “Staying strong after losing some games in the World League is not easy. We still need to grow technically, in personality and in spirit.”

For Italy, the win snaps a six-match losing streak to France. More importantly it brings them to two victories, one more than last place Argentina who is in the potential spot of being relegated. Italy also stays alive for the final six – although it would require two more Italian wins and help from others. They’ll look to get those wins coming up with Belgium tomorrow and Canada on Sunday – both opponents ahead of Italy and on the bubble for the final six in the Group 1 table.

Regardless of the loss, France was still got great contribution from Thibault Rossard (19 points) and Group 1 point-leader Stephen Boyer (19 points). France already will head to the final six, but will look for better play in preparation of next week. They took their first loss but still still sit in first at 6-1 with 19 points. They take on Canada tomorrow in search of redemption for the loss today while they’ll close out with Belgium.

In a match that featured two 3-3 teams, it was Canada squeaking out the five set victory to leapfrog Belgium in the standings.

The first set went back-and-forth with Canada eventually pulling ahead 12-9. That lead stuck until Belgium grabbed eight of 13 to bring things level at 17. Canada won the next point, but Belgium took two straight for their first lead of the set at 19-18 after Arno Van De Velde and Matthias Valkiers teamed up for a block. Team Canada wasn’t fazed though, netting five of the next seven before getting up 24-23. Stephen Timothy Maar, who had a match-best 24 points, got a kill on the next point to give Canada a 1-0 lead.

A 7-4 Canada run started the third set, possibly signaling that Canada was ready to sweep the match. However, Belgium came alive to tie the set a bit later, which would hold until Canada was able to gain two points of separation at 23-21. After Belgium won the next point to come within one, a Belgium attack was called out of the court to give Canada a 24-22 lead. However, on review, the ball touched the line to tie the set at 23. Following the roar of the home crowd, Belgium would eventually get two set point chances. The second was all they needed as Belgium’s leader in points for the day, Gert Van Walle (20), had the set’s final kill.

Belgium was forced to come back in the fourth again after Canada pulled ahead 16-12. Three unanswered by the Belgians tightened the set and was followed by a point for the Canadians. Another 3-0 spurt put Belgium in front at 18-17. Then, leading 24-22, a Belgium ace would force the fifth.

The first meeting between these two also went five sets, so it was fitting that the rematch would do the same. Just as Canada won that fifth, they did it again by taking six of the final eight points in the match. Nicholas Hoag put down the final kill, one of his 15 points.

Canada out-spiked Belgium 60-45 as they only had five players score, but all had 14 or more points. They also had four more blocks (15-11) and five more aces (10-5) in the match than Belgium, although they were more reckless as they recorded 10 more attack errors.

“This was a hard game and I’m happy with the win,” Canadian head coach Stéphane Antiga told FIVB post-match. “We could have won 3-0 but we didn’t. In the third and fourth set we made too many mistakes and Belgium started playing better. We played some good defence today. It’s an important win with the focus on reaching the Final Six.”

The win for Canada is their fourth, with three coming in five sets. That’ll be fine if Canada can score another win (or two to lock in a spot in the final six), but if they fall into a tiebreaker, the total points (9) could come back to bite them. Currently though, they sit in fourth place and will face France tomorrow before they finish up with Italy on Sunday.

Although they lost, getting the one point from the match going five does give Belgium 11 points. That mark is good enough to be the best of the six teams that are 3-4 which puts them in fifth place at day’s end. They’ll need to finish strong with at least one win between Italy tomorrow and France on Sunday to have a chance at the final six.