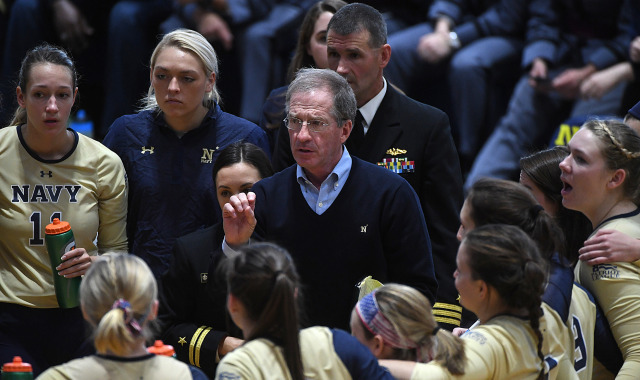 The U.S. Naval Academy announced March 22 that Larry Bock, the winningest coach in NCAA volleyball history, would retire. On May 7, the school released a tribute video honoring the coaches numerous accomplishments with the Midshipman and abroad. Current Photo via Navy Athletics

The U.S. Naval Academy announced March 22 that Larry Bock, the winningest coach in NCAA volleyball history, would retire. On May 7, the school released a tribute video honoring the coaches numerous accomplishments with the Midshipman and abroad.

Bock’s final year at Navy saw the team finish 23-8, including a 12-4 mark in the Patriot League, which set a new program record for conference wins. It also included the school’s first-ever win over 15-time league champion American and saw Navy in the Patriot League Tournament Championship match for the first time in 18 years. For his efforts, Bock was named the 2017 Patriot League Coach of the Year.

Bock came to Navy in the spring of 2011 after 34 years as the head coach of the women’s team at Division III Juniata College, where he led the program to a 1,242-192 record and guided the team to the NCAA National Championship Tournament in each of his last 30 years there. That run included DIII national titles in 2004 and 2006.

While at Juniata, Bock also spent six years as the school’s men’s volleyball coach, a role in which he amassed a 100-91-4 record, and 15 years as the school’s athletics director. He is a five-time AVCA DIII National Coach of the Year, a member of the AVCA’s inaugural Hall of Fame Class in 2003, and was one of 2 NCAA Silver Anniversary DIII Team Head Coaches in 2006. USA Volleyball recognized him with a Trailblazer Award in 2006 and an All-Time Great Coaches Award in 2009.