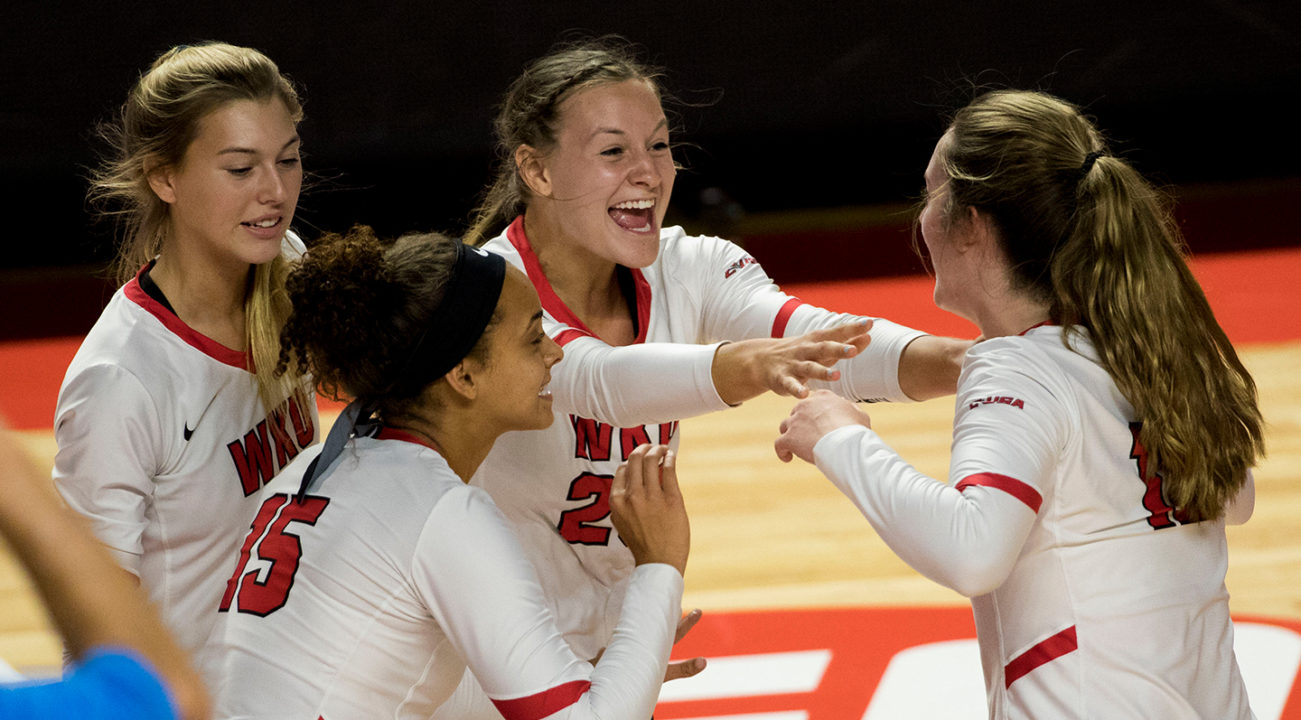 With wins over Chattanooga and Notre Dame to open the Holiday Inn-University Plaza Invitational, WKU Volleyball extended its home winning streak to 26 matches – the longest streak in the NCAA.  Current Photo via Western Kentucky Athletics

BOWLING GREEN, Ky. – With wins over Chattanooga and Notre Dame to open the Holiday Inn-University Plaza Invitational, WKU Volleyball extended its home winning streak to 26 matches – the longest streak in the NCAA. To open action from Diddle Arena, WKU swept Chattanooga before grinding out a five-set victory over Notre Dame to improve to 5-4 on the season.

“That’s been our season right there,” head coach Travis Hudson said of the five-set win over Notre Dame. “I’ll be honest with you, if we would have lost that match, I still would have been encouraged. We took some major steps forward today as a team.”

WKU’s morning victory revolved around its offense, which hit a blistering clip of .370 collectively. The day’s second match, however, was won following a stout defensive effort that included 103 digs – a modern scoring era record for the Lady Toppers.

WKU Volleyball scored the first three points in Friday’s opening match against Chattanooga and never looked back as the Lady Toppers would claim the set 25-14. The Red and White hit at a scorching .526 clip in the frame.

Tied at 15-15 in set two, WKU took the lead for good thanks to a UTC service error before Katie Shunk would go on a run behind the service line to put the Lady Toppers up 19-15. The Mocs did their best to limit the WKU offense but a Hallie Shelton kill closed the second frame with a 25-21 decision.

Trailing 18-15 in the third set, WKU went on its first of two 3-0 runs with two points off Emma Kowalkowski service aces. The Mocs managed a sideout out of a timeout to take a slim 19-18 lead but a kill off the hand of Sophia Cerino followed by two aces by Cerino gave WKU a 21-19 lead. After a Chattanooga ace tied the frame at 24-24, WKU sealed the deal with a Kayland Jackson kill and an errant attack by UTC for the 26-24 victory.

Rachel Anderson led WKU with 10 kills in the match and a .643 hitting percentage. Taylor Bebout and Mary Martin shared setting duties in the contest with 18 and 12 assists, respectively. Cerino racked up four aces while Katie Isenbarger led the Lady Topper blocking effort with three.

In a rematch of the NCAA Tournament First Round contest last December, WKU and Notre Dame battled back-and-forth in a five-set thriller Friday night.

Set two would also fall in favor of the Lady Toppers with WKU claiming its second-straight set by a 25-17 margin. After the Red and White jumped ahead to an 11-4 advantage, Notre Dame was able to keep even with WKU the rest of the way. The Lady Toppers hit a collective .419 in the frame with five kills from Katie Isenbarger.

Notre Dame would fight back out of the break to claim the match’s next two sets. The Fighting Irish won set three 25-23 and took set four again by the slimmest of margins at 27-25.

In a winner-takes-all fifth set – WKU’s first of the season – Notre Dame opened a quick 3-1 lead before WKU would go on to score nine of the next 10 points for a 10-4 advantage. The Irish scored four of the next five points to pull within 11-9 and force a Lady Topper timeout. Out of the stoppage, Bebout found the floor on the second touch for her first kill of the match. Isenbarger and Kayland Jackson followed with a block to give WKU a 13-9 lead and Cerino struck for her 12th kill of the night to set up match point. Notre Dame answered with one more kill but WKU ultimately claimed the set by a 15-10 reading to improve to 2-0 all-time against the Irish.

“I just think the momentum just switched to our side,” Jackson shared. “The vibes were great everyone was in each other’s face like positive pushing each other around and that’s what really just drives each other and gets each person going on the court.”

Both Bebout (50 assists) and Shelton posted double-double performances. Bebout is up to three on the season while it was a career first for Shelton.

“The crowd was awesome tonight,” Kowalkowski shared. “They were with us every point. It was a very cool atmosphere to play in.”

NEXT UP
WKU will look to claim its first pre-conference tournament title of the season on Saturday with just a 2:30 p.m. tilt against Miami (OH) standing in its way.