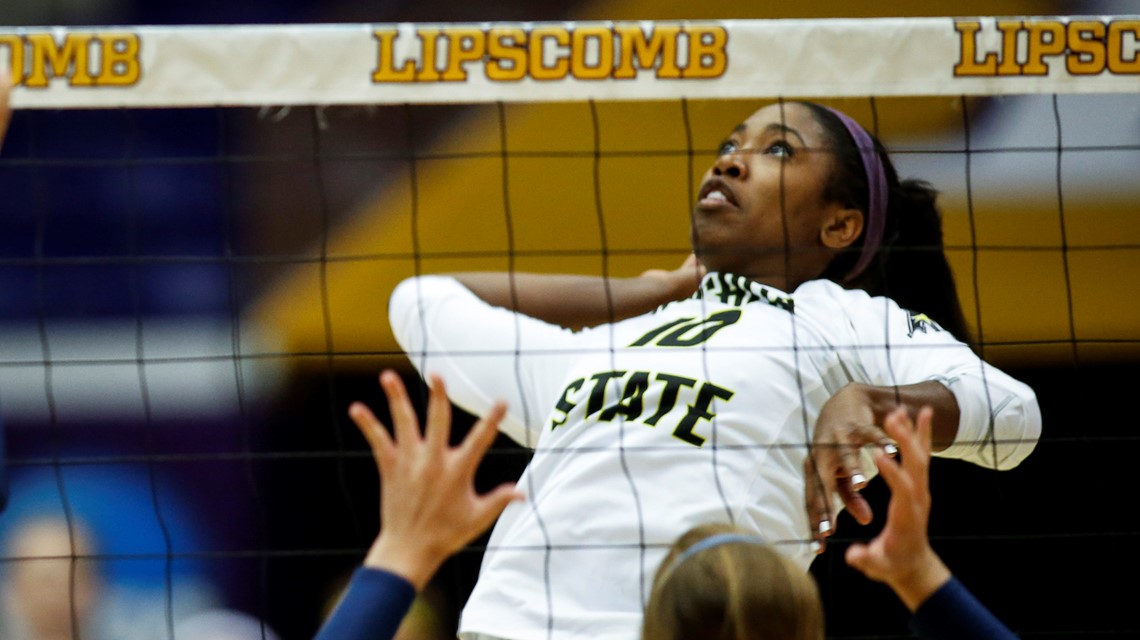 Tabitha Brown was named the MVP of the Hampton Inn Invitational thanks in part to 24 kills in Saturday's finale. Archive Photo via Wichita State Athletics

After an early hangover from their dramatic 5 set win in the morning against Marquette, Wichita State took a comfortable 3-1 win against Miami in their afternoon match in Indianapolis, Indiana. This was the first ever matchup between the two teams.

The win pushed the Shockers to 6-0 on the season. That makes this season their second best start ever, behind only 2008, where the team won their first 29 games before losing 2 of their last 3, including a loss to Texas in the 2nd round of the NCAA tournament.

Wichita State was led by junior outside hitter Tabitha Brown, who had 24 kills added to her 21 from the morning game for a whopping 45 kills on Saturday. She also had 7 more digs (25 total on the day) and 2 more block assists (5 total on the day). Based on stats coming into the weekend, her 24 kills in a 4-set match would tie for the 3rd-best single match output in the country this season.

After an emotional morning match, Wichita State struggled to withstand Miami’s early energy. The Redhawks had 14 kills and just 1 error in the first set (.351 hitting percentage). WSU dropped that first set in spite of 8 kills from Brown.

She went quiet through the middle two sets, the most dominant for the Shockers, but then exploded with 10 more kills in the 4th set. Those middle two sets then, ironically, were where Wichita State hit well (.448 and .379, respectively). The Shockers played especially well on sideouts in those middle two sets. Miami only scored more than 1 consecutive point 3 times in each of those two sets.

Miami’s two star sophomores Taylor Daignault and Margaret Payne did their part. They each had 15 kills, and Payne hit .500 (1 error, 28 attacks) while Daignault hit .364 (3 errors, 33 attacks). The rest of the team combined for just 20 kills and just an .025 hitting percentage.  The Redhawks have the maturing core of a team that was 15-1 in the MAC last season. They run a two-setter offense and hit heavily out of the middle, but they rely heavily on the two aforementioned players in all facets of their game – hitting, blocking, defense, and serving. The two will need some support for the Redhawks to compete nationally and make a deeper run into the NCAA tournament than their first-round exit last season.

Hiebert and Lehman were also named to the all-tournament team.

NEXT MATCH:
• The Shockers are next in action on Fri., Sept. 8 vs. Duquesne and Oregon in the Nike Classic in Eugene, Ore.

INDIANAPOLIS – Against another formidable opponent, the Miami University volleyball team battled but ultimately fell to Wichita State 1-3 (25-21, 16-25, 13-25, 25-27) to conclude play at the Hampton Inn Invitational. The RedHawks are now 4-3 on the season, while the Shockers improve to a perfect 6-0.

Sophomore middle hitter Margaret Payneand sophomore outside hitter Taylor Daignault were the stars for Miami. Payne finished with 15 kills and seven blocks (two solo and five assisted). She made only one error in 28 attempts for a .500 attack percentage. Daignault just missed a double-double, tying for the team lead with 15 kills, while also recording nine digs.

Payne and senior right side hitter Katie Coverdale helped Miami to a 6-4 advantage in set one. Wichita State rallied to take a 13-12 lead. Daignault put down a kill, but the Shockers scored three in a row to make it 16-13. Trailing 14-17, kills from Payne and Daignault, along with a block by Daignault were part of a 7-1 run that gave the RedHawks a 21-18 advantage. The teams traded side outs until it was 23-20. At that point a kill from Daignault off an assist from freshman setter Morgan Seaman and a kill from Payne gave Miami a 25-21 win.

Daignault and Payne each had a kill, followed by a Daignault service ace to give the ‘Hawks a 3-0 lead in set two. The Shockers scored the next three in a row, and then the teams split points until it was tied at nine. A 10-4 run by WSU put it in control at 19-13. Senior outside hitter Olivia Rusek, senior right side hitter Katie Tomasic and Daignault each had kills, but it was not enough as the Shockers took a 25-16 victory to even the match at one set apiece.

Miami scored the first two points of set three, but a 13-3 run gave Wichita State at 13-5 lead. Payne had two more kills, but the Red and White were unable to get back into the frame as the Shockers won, 25-13.

Trailing 9-12 in set four, kills from Daignault and Coverdale started a 6-2 run that gave the RedHawks a 15-14 advantage. Wichita State regained a 19-17 lead, but a kill from Payne and back-to-back blocks from Tomasic put Miami on top once again. Tied at 22, a kill from Daignault and a service ace from Seaman gave the ‘Hawks set point at 24-22. The Shockers fought it off with three straight points of their own to get match point, but a kill from Daignault tied the score at 25. WSU answered with two straight to take a 27-25 victory and a 3-1 win in the match.

Miami returns to action on Tuesday when it hosts Dayton at 7 p.m. That match will be broadcast live on ESPN3.