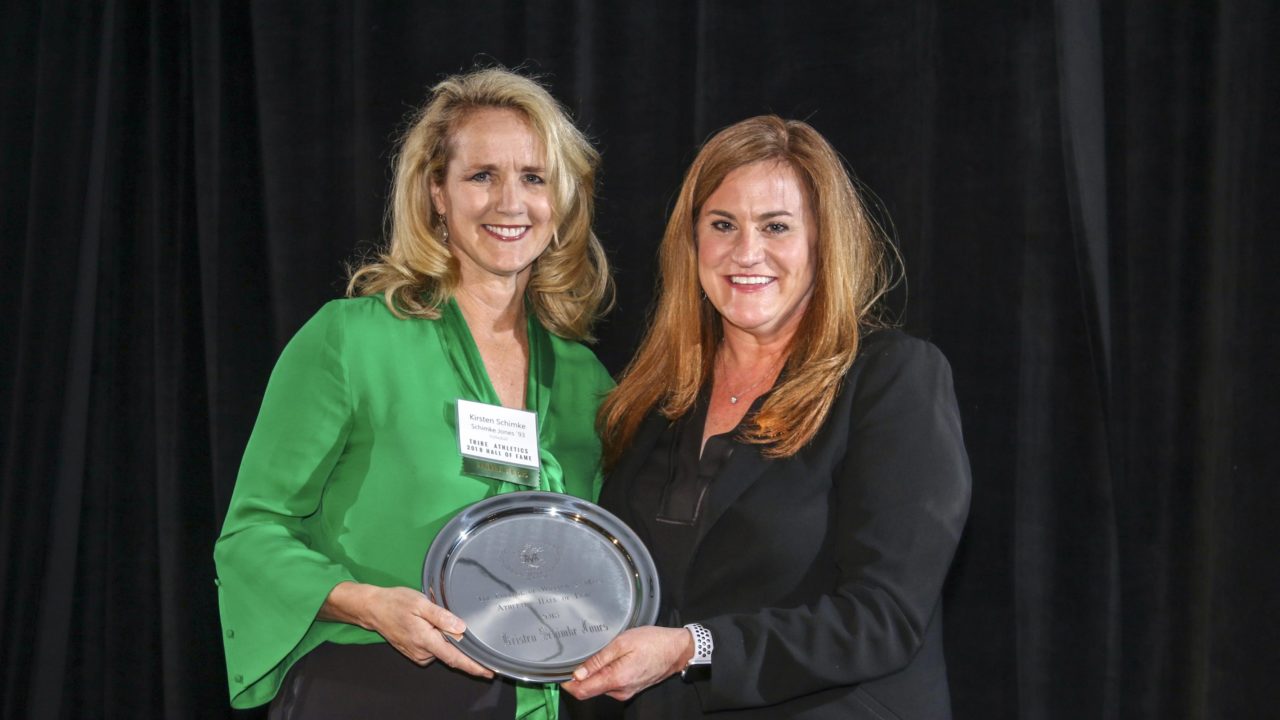 WILLIAMSBURG, Va. – William & Mary Athletics inducted its Hall of Fame Class of 2018 on March 24. Volleyball’s Kirsten Schimke Jones ’93 was among the nine former student-athletes and one team to earn the prestigious distinction. Relive the memorable night with Schimke Jones’ Hall of Fame presentation and acceptance speech.

Schimke Jones came to the Tribe as a junior, after transferring from San Diego State.  By her senior season in 1992, she had earned consecutive first-team all-conference honors and was named as the CAA’s Player of the Year.  Despite just having two years in the league, Schimke Jones was named to the CAA 25th Anniversary team, recognizing the top 25 players in the league’s first quarter century. ?

She recorded the first quadruple-double in school history in 1991 against Florida State, with 12 kills, 52 assists, 11 digs, and 10 blocks.  She remains one of only two Tribe players to accomplish the feat.  Additionally, Schimke Jones was the first player to score a triple-double for W&M, something she accomplished a total of four times.

She was a critical piece of the Tribe squad that fashioned a 24-7 regular season record and then went onto post a 3-1 record in the NIVC (NIT for volleyball) in 1991, winning the CAA tournament and regular seasons along the way.   W&M went 19-12 in 1992, falling in the CAA Tournament finals.   Schimke Jones had 67 assists against Northeastern in 1991, a total that was fourth at the time and still ranks ninth in school history.  She finished her career with a school-record 1,133 assists in 1992, a total that still ranks sixth all-time.   This effort was on the heels of her contributing 999 assists in 1991, (which still stands ninth all-time in the Tribe’s single-season record books).  Her career hitting percentage of .287 remains as the third best all-time across all scoring eras and her 2,132 career assists was also second upon her graduation and remains fifth.

After she graduated from W&M in 1993, armed with a degree in East Asian Studies and a proficiency in Japanese, did what any good liberal arts major would do and moved to Budapest, Hungary. Always up for an adventure, Schimke Jones spent the next decade in Europe, where she met her husband Evan Jones, got married, joined NIKE’s Eastern European offices, and moved from Vienna to Stockholm and eventually, Amsterdam where she held multiple roles in Sports Marketing and Product Merchandising.

In 2003, now the mother of the first of her three children, Schimke Jones and her family returned to the United States to NIKE’s World Headquarters in Portland, OR, where Schimke Jones took the same drive and focus she exhibited on the volleyball court to design and facilitate an executive course called Product Creation University, which helped train and inspire over 500 of NIKE’s product and marketing leaders.

As Schimke Jones’ family grew, so did her desire to explore new career paths.  She left NIKE in 2008 to realize her dream of becoming a Sports Parenting Coach.  In her new role, Schimke Jones works with teens and their parents, using her experiences as an athlete, an executive, a teacher, a leader and a mother to help her clients set athletic, educational and person goals, align their values with their actions, and learn what it means to go after what they truly desire in life. She is currently the Co-Host of a podcast #RaisingAthletes with Kirsten Jones & Susie Walton, and lives in Los Angeles with her husband and their three kids, CJ(17) , Parker(14) and Kylie(12).