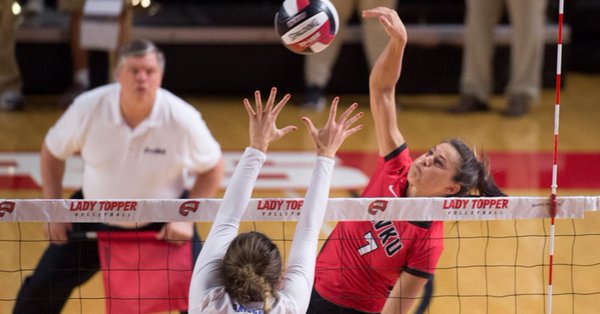 Sophomore middle Dora Peonia recorded 11 kills to lead MTSU, while redshirt sophomore outside Alyssa Mathis added nine putaways. Peonia was one of three Blue Raiders with two aces in the match, alongside junior outside Regan Coughlin and sophomore libero Brienna Tankesley, while also pulling up a team-high five digs.

WKU wasted no time taking control in the match, surging ahead 11-2 in the opening stanza. Four MTSU errors and three Cavanaugh putaways aided the Lady Toppers. The Blue Raiders scored three of the next four, but Western Kentucky boosted the advantage to 12 at 17-5 with a trio of Middle Tennessee miscues. MTSU didn’t go away quietly, notching a 9-3 run, including four aces, and two kills and a block by Mathis, to cut the margin to six at 20-14. WKU wrapped up the set with a 5-1 run, capped by a Lucas putaway.

Four Blue Raider errors and three Taylor Dellinger kills put WKU on top 12-6 in Set 2. A kill and an ace by Engle and a block by Anderson upped the advantage to eight at 18-10. Five players notched kills to pull MTSU within six at 23-17. A block by Johnson and Blue Raider hitting error gave Western Kentucky the 25-17 win.

WKU scored five of the first six points in Set 3, including a kill and a block by Jackson. Middle Tennessee scored five of the next eight, with kills by four different players, to pull within two at 8-6. Thre Blue Raiders errors and two Jackson putaways lifted the margin to six at 16-10. MTSU rallied again, slicing the margin to one at 20-19, with help from three aces and three Peonia kills. The Lady Toppers clinched the record win with a 5-1 run, including three Cavanaugh kills.

After a quiet night in the weekend opener, the WKU Volleyball offense returned with a high-powered showing in the Lady Toppers’ sweep of Middle Tennessee Sunday afternoon. Hitting .507 as a team, WKU saw Alyssa Cavanaugh lead the way with 11 kills while Rachel Anderson posted a match-best .727 attack clip.

The Red and White have now won 13-straight matches to improve to 17-2 overall. Additionally, the victory tied WKU for the Conference USA record of 29-consecutive wins over league opposition. The Lady Toppers have not lost in Diddle Arena to a league opponent since 2011, taking down 47-straight visitors from the conference (Sun Belt & C-USA) in that span.

“That’s the thing that’s most remarkable about putting together that we have, is the group of college kids showing up that many times in a row ready to play,” head coach Travis Hudson said when asked about the team’s streak over C-USA teams. “We get everybody’s best shot, we know we do. To be able to deal with road trips, sickness, school and everything else to compete that many times in a row is a pretty nice feat.”

“Middle has a new coach and a new culture so they’re basing everything off just playing really hard,” Hudson continued. “They played with incredible effort throughout the match and I thought we did a good job of matching that.”

WKU wasted no time getting ahead in the day’s opening set, claiming 11 of the match’s first 13 points. Middle Tennessee made a run of its own late in the set trailing 17-5 and pulled within six points at 20-14 but the Lady Toppers shut the door to claim the 25-15 first-set victory. WKU hit a collective .526 mark in the set, finding the floor with 12 kills against just two errors. Cavanaugh paced the offense with four kills on five swings in the frame.

Ahead 1-0 in the match, the Red and White saw MTSU tally to first two points of the next frame. The Blue Raiders pushed ahead to a 4-2 advantage but a solo block by Cavanaugh followed by seven Darby Music serves saw the Lady Toppers take a 9-4 lead. Middle Tennessee closed the gap to four points, trailing 9-13 but WKU pushed out to an 18-10 lead to put the frame out of reach. Winning set two by a score of 25-17, WKU Volleyball registered an 82-percent sideout rate combined with 12 kills to take a 2-0 lead heading into the locker room.

Out of the break, the Lady Toppers jumped ahead 5-1 and never looked back. The Blue Raiders were able to hang around but never found a way to break even. WKU owned a 19-13 lead late in the set before MTSU clawed back to a one-point deficit at 20-19. The following two points, WKU capitalized on errors by the visitors before Cavanaugh came in for consecutive kills to make the score 24-19. MTSU recorded another point but Cavanaugh had the final say with her 11th kill of the night to close the book on the 25-20 set three victory.

Cavanaugh’s 11 kills were a team best while the outside hitter owned a .533 attack rate on the match. Anderson registered nine kills on 11 attacks for a .727 hitting clip. Both attackers added a pair of blocks on the other side of the net. Cavanaugh’s first solo stop of the match landed the senior on the WKU program’s top-10 list for career solo stops with 79. One set later, the Louisville native notched her 80th block of the sort.

As a team, WKU combined for a season-best .507 hitting percentage, marking the second match of 2017 the team has eclipsed the .500 plateau.

Freshman Kayland Jackson mixed into the attack with five kills on eight swings for a career-high .625 hitting percentage. Sydney Engle added five kills on nine swings for a .556 efficiency clip while tallying a team-high 10 digs on the match.

Jessica Lucas facilitated the offense and racked up 32 assists on the Lady Toppers’ 40 kills of the match. Lucas contributed eight digs, four kills, three block assists and a service ace.

At the net, WKU collected eight blocks on the day, led by the three assist stops from Lucas. Cavanaugh owned two of the team’s five solo stuffs while Anderson and Jackson both tallied one of each block.

Defensively, the Lady Toppers held Middle Tennessee to a .146 hitting percentage including .026 and .062 showings in the first two sets of the day, respectively. WKU posted 32 digs in the match against just 16 by the visitors. Engle and Lucas led the way in the category while Emma Kowalkowski chipped in seven and Darby Music added four.

WKU will continue its home stand hosting next week’s lone match against Southern Miss on Friday. The first serve from Diddle Arena is slated for 6 p.m. CT. Of the team’s 11 remaining matches of the regular season, six will take place at home in Bowling Green.

“It’s great to be back home,” Engle said of the home stand. “Traveling always takes it out of us, for sure. It’s nice to be able to be able to wake up at home and come in here and do our normal thing. I love playing in Diddle Arena in front of all of our fans; they’re the best.”

Notable
Redshirt-sophomore Alyssa Mathis posted her best offensive outing of her career to ink nine kills and one hitting error to hit on a .533 clip.

From her setter spot, sophomore Taylor Hammill tallied 29 assists while adding four digs, two kills and an ace over the Lady Toppers.

Set by Set
In the first frame, the Lady Toppers controlled the set opening with an 11-3 lead over the Blue Raiders. However, Middle Tennessee responded with 11-7 run (20-14) of its own with kills from Coughlin, Mathis and Peonia but, it was not enough as the Blue Raiders dropped the first set, 25-15. Similarly, the Lady Toppers edged Middle Tennessee in the second set, 25-17.

In the third and final frame, The Blue Raiders posted their best outing of the match hitting on a .345 clip. Peonia posted six kills in the third while Mathis and Mason contributed three a piece. Similar to the first two sets, Western Kentucky clinched the match in the third, 25-20.

Quotable
“Before the match we specifically talked about being loose but not goofy loose. In our match against Rice, they were dancing on the court before the match in a very loose and goofy way opposed to a loose, focused mentality. I appreciated that our team responded to our message and preformed at much more focused and composed level. I am more proud of the team now with a loss for the way they competed and fought back than I was for a couple of the wins we had were we didn’t necessarily fight to that level. There was definite growth today, and the girls took another step forward in the right direction. We still need to improve on our ball control but, when we find our consistency we will start to go onto four and five set matches and begin to win them. But overall, I could not be more proud of what the team did today”. – Head Coach Chuck Crawford

“It obviously isn’t a great feeling to lose but at the same time I feel great about our performance. I think that this game against Western has been one of the best game that we have played as a team and that was MTSU volleyball”. – Redshirt-Sophomore Alyssa Mathis

Up Next
The Blue Raiders return home next weekend to continue conference play with matches against LA Tech on Friday, October 6 at 7 p.m. and FAU on Sunday, October 8 at noon.