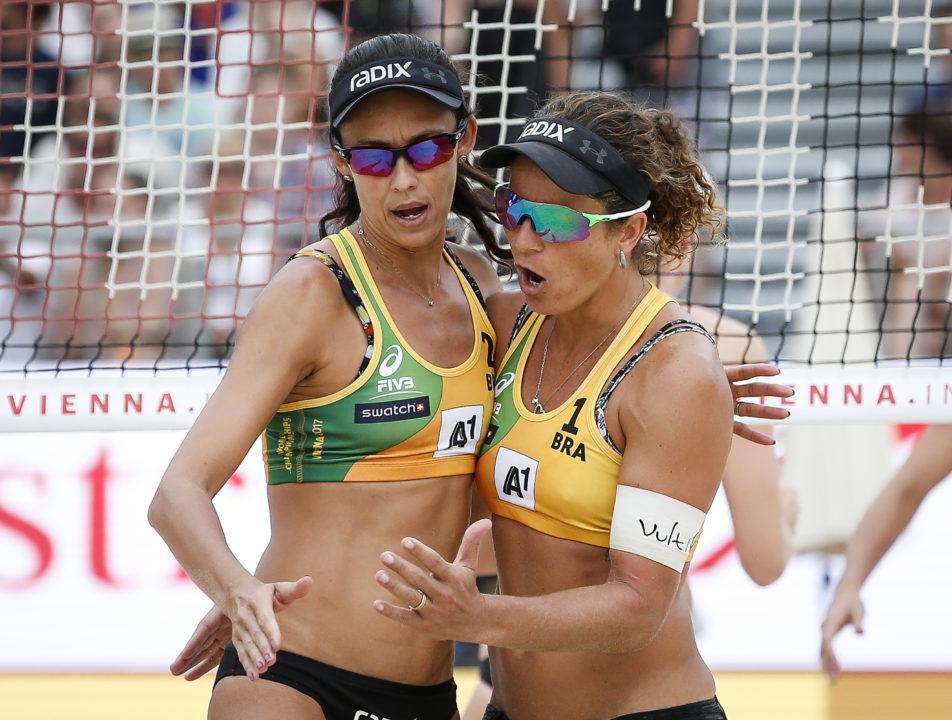 A day after American's Nicole Branagh and Emily Day win their first match as a pair, they were taken down by top-seeded Larissa Franca and Talita Antunes of Brazil. Current Photo via FIVB

A day after American’s Nicole Branagh and Emily Day win their first match as a pair, they were taken down by top-seeded Larissa Franca and Talita Antunes of Brazil. The Brazilian duo showed their dominance on the sand a day after nearly losing to the #48 seed in the Vienna Beach World Championships.

Franca/Antunes needed just two sets and 34 minutes to take down the Americans 2-0, (21-15, 21-9). The Brazilians dominated in the second set, putting down 15 kills as a duo over Branagh/Day’s six.

Antunes put down a total of 18 kills in the match, using a mixture of hard cross shots and line shots to trip up the American side. Franca put down 11 kills in the match hitting short and deep shots around the Branagh block, as she ended with zero blocks in the match. Throughout the match, the Brazilian’s put the pressure on Branagh/Day on the serve, making them decide on the passer by serving to the middle while also mixing it up to hit tough line serves.

“They played a perfect match. They got to every single ball, which put pressure on us. We need to bounce back,” said Branagh after the match.

Despite a variety of shots taken by Day, she was only able to successfully score 19 kills in the match, as the Brazilian duo read their attack to dig up the balls.

The Brazilians get a day off, returning to the sand on August 1 with Germany’s Isabel Schneider/Victoria Bieneck, while the American’s get a chance to redeem themselves with a match against Austria’s Katharina Holzer/Teresa Strauss the same day.