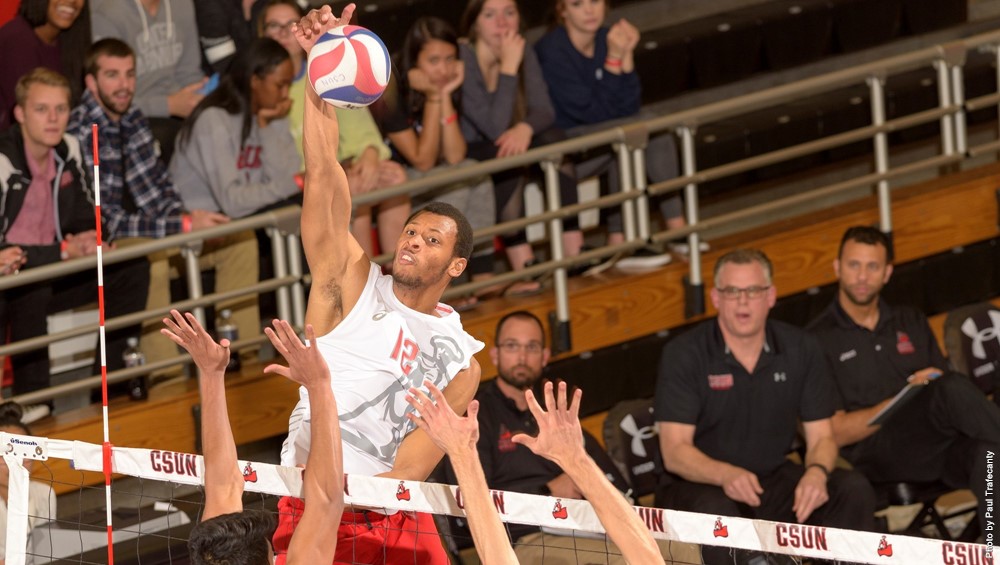 The Matadors were led by senior Arvis Greene, last week’s AVCA Player of the Week, who led all attackers with 17 kills on .333 hitting. Greene also dug 5 balls and blocked 2 more on the night. No other Matador had more than 7 kills. Leading the defense at the net was Eric Chance and Sam Porter, each blocking 4 attacks. Setter Porter also finished with 35 assists and scooped 4 balls on floor defense. Schylar Lillethorup earned 2 aces in only 3 sets of play as a serving substitute. Libero Emmett Enriques led all floor defenders with 13 digs, nearly twice as many as anyone else in the match.

The loss extends UCSB’s losing streak to four straight and drops them to .500 for the first time in over a month. In the Gauchos’ defense, all of their recent losses have come to top ten programs. UCSB was led offensively by Corey Chavers with 13 kills. Setter Randy DeWeese earned man-of-the-match status with a full stat line; DeWeese finished with 32 assists, 7 kills (hitting .600), 7 blocks, 6 digs and 2 aces. Connor Drake made his presence known on defense with a career-high 9 block assists. Libero Grady Yould dug a team-high 7 balls on the night.

The two teams go at it again, this time in Santa Barbara, as their home-and-home series continues Saturday night at Rob Gym on the UCSB campus. A win for CSUN, combined with a UCI loss, would place the Matadors alone in second place in the Big West.

NORTHRIDGE,Calif. –The eighth-ranked CSUN Matadors took down another ranked opponent Friday, as they downed No. 11 UC Santa Barbara in four sets (16-25 25-21 25-16 25-23) in a Big West Conference match at The Matadome.

The Matadors won for the fifth time in a row, improving to 13-7 overall and 3-2 in the Big West.

Senior Arvis Greene once again led the way with a match-high 17 kills on .333 hitting. Last week’s AVCA National Player of the Week, Greene leads the team with 280 kills on the campaign.

“In the first set I didn’t play well overall, but I knew I had to bring it for us to win.” said Greene. “I am happy that we bounced back and we were able to get the win as a team.”

Coming off a solid two-match series against No. 3 Hawai’i, setter Sam Porter led the Matadors with 35 assists as CSUN hit .218 (42-20-101) as a team. Porter and Eric Chancecontributed on the defensive side as well, as they each had four blocks.

CSUN looked rusty at the start, playing its first match since a 3-0 home win vs Hawai’i on March 16th. UCSB capitalized on several Matador miscues in the first set as they jumped out to a large lead and didn’t look back. CSUN trimmed the Gauchos lead down to 9-6 early on, but the visitors went on a 6-0 run and the deficit became too large for the Matadors to overcome as UCSB went on to take the set, 25-16.

The Matadors shook off the rust, however, and were able to bounce back and play a much better second set. The set went back and forth as no team gave an edge for the first 30 points. A 3-0 CSUN run, fueled by the serving of Schylar Lillethorup, opened up a 19-16 lead and forced the Gauchos to take their first timeout. CSUN was able to hold on to the lead as a Matt Ujkic service error evened the match at one set apiece.

CSUN took control of the match in the third set. The Matadors took a 6-3 lead early with back-to-back kills from Josiah Byers and Greene. They would later increase their lead to 8-4 following a solo stuff by Kalchev. Kills by UCSB’s Corey Chavers and Roy Mcfarland cut the Matador lead to 8-7, but CSUN weathered the storm and were able to pull away and claim the set 25-16.

The fourth and final set was the most tightly contested of the match. An early attack error by Chance gave the Gauchos a four-point lead at 10-6. CSUN would then rally to claim five out of the next six points to tie the set at 11. The match proceeded to go back and forth with no team letting up. A pair of attack errors by Kalchev evened the match at 20, but then two consecutive errors by the Gauchos gave the Matadors the upper hand in the late stages.

“I think UC Santa Barbara is a really good team, they played well and the match could have gone either way.” said CSUN head coach Jeff Campbell. “I felt like UCSB was ready to go and we weren’t, but the first set didn’t define us. We were able to snap back and play well, and I am really proud of the guys for doing that.”

UCSB dropped to 9-9 with the loss, bringing its winning percentage to .500 for the first time since February. Losers of four straight, all against AVCA top-10 teams, the Gauchos are now 2-3 in league play. CSUN meanwhile improved to 13-7, 3-2.

The Gauchos were led offensively by junior outside hitter Corey Chavers, who had 13 kills on .208 hitting. However, four different hitters had at least seven kills as the team finished with a .212 attacking clip. Junior middle blocker Connor Drake(career-high nine block assists) and sophomore setter Randy DeWeese (seven blocks) headlined the team’s defensive efforts.

CSUN was paced by Arvis Greene Jr.’s 17 kills. The Matadors narrowly outhit the Gauchos for the match, finishing with a .218 hitting percentage.

UCSB came out firing in the game’s opening set, taking advantage of early CSUN miscues to take a 5-1 lead off the bat. Careful hitting – CSUN had eight errors in the set, twice as many as UCSB – and a balanced attack – UCSB received multiple kills from four separate players – allowed the Gauchos to maintain a solid lead throughout, taking their biggest lead at 19-9 on a tap-down kill from freshman middle Jack Truman (eight kills on .500 hitting overall for the night).

The Matadors began their charge back in the second, using a 9-5 run off a 16-16 tie to even the match. The home squad put together its best performance in the third, hitting at a .444 clip while UCSB struggled to a -.125 mark.

UCSB actually outhit CSUN by a sizable margin in the fourth, .385 to .233, but eight kills from Greene Jr. turned out to be the difference in the end. A DeWeese ace at 14-12 was the last time the Gauchos would lead, as an ensuing error followed by three straight points for CSUN put the hosts up for good. Greene knocked down three kills as part of a 5-3, match-clinching run at the end of the fourth.