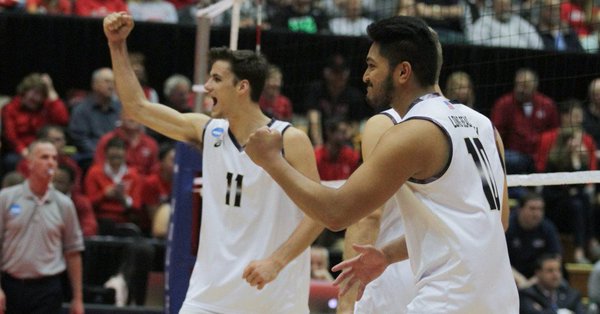 In their first five-set match of the season, #1 Long Beach survived #4 UC Irvine in the Pyramid Friday night. Current Photo via LBSU Athletics

LBSU was led offensively by TJ DeFalco with a match-high 22 kills on .326 hitting. This was DeFalco’s second 20-kill effort on the season and the 14th of his career. He also added match-highs of 5 aces and 5 blocks, two of which were solo (also a match-high). His full stat line also included 7 digs. Fellow junior Kyle Ensing finished with 13 kills while also adding 8 digs, an ace and a block. Libero Jordan Molina dug a match-high 14 balls on defense. Setter Josh Tuaniga recorded a double-double—his third of the season and sixth of his career—with 48 assists and 11 digs. He also contributed 4 kills, 2 blocks and 2 aces.

For UCI, the loss snapped their six match winning streak. Aaron Koubi tied his career-high with 21 kills on .410 hitting. He single-handedly won set 4 for the Anteaters with 8 kills on 13 errorless swings. Koubi also added a season-high 9 digs and blocked 3 at the net. Reigning Big West Player of the Week Karl Apfelbach finished with 10 kills, 7 digs, 3 blocks and an ace. Setter Dante Chakravorti finished with 36 assists, 8 digs and 4 kills on 4 swings. Seven-footer Scott Stadick had a solid outing as well, recording 9 kills and a match-high 5 blocks. Libero David Parker notched a season-high 14 digs.

The two go at it again, this time in Irvine, California on Saturday, March 31 at 7:00 p.m. in the Bren Events Center.

With the win, Long Beach State improves to 20-0 on the year as it remains the lone undefeated team in Division I-II. The victory marks the third straight 20-win season for LBSU, and the eighth under head coach Alan Knipe.

The Beach are now 5-0 in Big West Conference action, while UC Irvine drops to 3-2 in league play and 17-6 overall.

In the battle between the two top teams in the league, Long Beach State was led by junior outside hitter TJ DeFalco‘s 22 kills, five service aces and five blocks (two solo blocks, three block assists). The 20-kill effort is the second of the season for DeFalco and the 14th in his career.

Junior setter Josh Tuaniga logged his third double-double of the year — the sixth of his career — as he notched 48 assists and 11 digs in the contest. Tuaniga also contributed four kills, two service aces, and a pair of blocks, while hitting .600 (4-1-5).

Defensively, the Beach were led by junior libero Jordan Molina who collected a career-high 13 digs in the backrow to pace the Long Beach State offense which limited UC Irvine to a .197 attack percentage.

The Beach got off to a slow start as the Anteaters opened the match on a 5-0 run forcing a Long Beach State timeout. UC Irvine out-hit LBSU .308 to .192 in the first set as the Anteaters led most of the frame and earned a 25-22 win.

Despite the setback in the opening set, Long Beach State bounced back and won the next two sets to go up 2-1.

Long Beach State took a 2-1 set lead after hitting .364 in the third set and holding UC Irvine to a .000 attack percentage. The Beach went on an impressive 7-0 run to take a 15-11 lead before taking a 17-12 lead as the Anteaters called for a break in action. With a commanding lead, the Beach cruised to a 25-16 lead.

The Beach opened up the fourth set on a 4-0 run, but the Anteaters countered with a 4-0 run of their own to even the score. From there, the two teams fought through nine ties and three lead changes before UC Irvine used a 5-0 run (16-12) that LBSU could not come back from. The Anteaters won the fourth set by a score of 25-21 forcing a fifth and deciding game.

Koubi recorded 21 kills and hit .410 (21-5-39). The outside hitter put UCI on his back in the fourth set with eight kills on 13 swings and no errors. He also added a season-high nine digs and three block assists.

Long Beach scored the first point of the match then UCI scored the next five, three on Aaron Koubi kills, 5-1. A Koubi ace would make it 9-4 and UCI would continue to lead 16-12 on an Apfelbach ace. An Apfelbach kill followed by a Forty-Niner error give UCI set point 24-18. Long Beach State would score the next three points, two on TJ DeFalco aces to narrow the margin to 24-22, but Scott Stadick would put a ball away to end the set 25-22.

Long Beach State controlled the second set, winning 25-15. The Forty-Niners would score five straight points to put the set out of reach at 21-13.

UCI had an early 3-1 lead and would hold the 11-8 advantage until LBSU went on a 7-0 run to take a 15-11 lead. Long Beach would then cruise to a third set victory, 25-16. UCI hit .000 for the set and had seven attack errors, two receiving errors and six service errors to help the Forty-Niners.

LBSU would lead 5-4 in the deciding fifth set before a UCI service error was followed by a kill and ace by De Falco to extend the Forty-Niner lead to 8-4.  Back-to-back kills by Long Beach moved the margin to 11-6 and the Forty-Niners would go on to win the set 15-9 and the match.