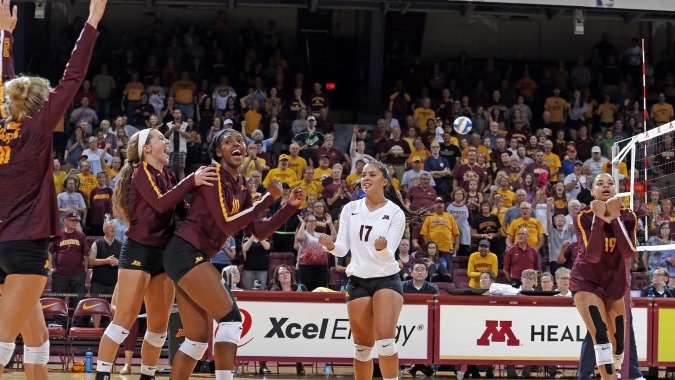 Minnesota narrowly edged out Wisconsin in a back and forth five setter in Madison.  Current Photo via Minnesota Athletics

#10 Wisconsin brought in the #6 Minnesota Golden Gophers to the Field House for a five set battle. Coming into the match, the two teams had an identical record, 2-2 with both losing to Nebraska and Michigan State. Wisconsin started the block party early, registering 4 by 9-9 in the first set. The defense for the Badgers was so strong that Minnesota only had one player hitting positive until 23-23. Defense at the net continued to be a theme throughout the first set with the Badgers finishing it with a block on Jasmyn Martin. Minnesota came out strong in the second set, jumping out to a 7-3 lead behind strong serving from Molly Lohman. Their offense bounced back recording a .239 hitting percentage to Wisconsin’s .167. Wisconsin returned the favor in the third starting up 3-0 with a quick service ace from Sydney Hilley who set her team to a .316 percentage that set. The fourth and fifth sets were back and forth battles with Minnesota narrowly edging out the Badgers to take the match.

After an up and down first set, Alexis Hart rebounded to put down a match high 24 kills, 1 service ace, 1 block assist and 3 digs. Also helping out on the pins were freshmen Stephanie Samedy and Jasmyn Martin who scored 15 (.191) and 17 (.293) kills each. Minnesota’s reputation for strong ball control also showed up with Dalianliz Rosado popping up 20 digs and Samantha Seliger-Swenson setting 62 assists.

As a team, the Golden Gophers hit .239, including .405 and .409 in the final two sets. It was Minnesota’s second fifth-set win of the season, the first coming against Boise State.

Alexis Hart and Jasmyn Martin had career high nights. Hart had a career-best 24 kills, while Martin at a career-high 17 kills. Stephanie Samedy had a double-double with 15 kills and 16 digs. Dalianliz Rosadoadded 20 digs. Samantha Seliger-Swenson added 62 assists, a season best, and finished off the double-double with 12 digs. Lohman led the Gopher blockers with seven blocks.

First Set: Wisconsin took the first set, 25-23. After seven tie scores through the first half of the set, Wisconsin went on a 4-0 run to take a 14-10 lead as the Gophers called their first timeout of the set. Minnesota came within two at 16-14 off a Samedy kill. Minnesota went on a 3-0 run and later tied up the set at 18-18 off a Lauren Barnes ace. The Gophers later took a 20-19 lead off a Hart/Lohman block as the Badgers called their first timeout. Wisconsin rallied back to take a 23-22 lead as Minnesota used its second timeout of the set. As the two teams tied at 23, Wisconsin finished off the set with a kill and a block for the 1-0 lead.

Second Set: Minnesota held the lead at 2-1 and won the set, 25-20 to tie the match. The Gophers opened the second set with a 5-1 lead and later a 9-5 lead off an ace from Rosado. A Wisconsin attack error put the Gophers up, 14-8, which forced Wisconsin to call a timeout. Martin added a kill for an 18-11 Gophers lead as the Badgers burned their second timeout of the set. A Hart kill pushed the score to 21-14. As Wisconsin pushed back in the set, the Gophers called a timeout with a 23-19. The Gophers closed out the set with a pair of kills for a 1-1 tie.

Third Set: Wisconsin held the lead from the first point and later took a 25-21 set win. The Badgers opened up the third set with a 5-1 lead and later a 10-5 lead as the Gophers called a timeout. Trailing 15-9, Minnesota called its second timeout. A Lohman kill put the Gopher deficit to 16-13, and a Hart kill pulled Minnesota within three at 20-17. Wisconsin pushed it to set point at 24-19, but the Gophers fought off back-to-back set points as Wisconsin called a timeout at 24-21. The Badgers, however, finish off the set with a kill to take a 2-1 lead.

Fifth Set: Minnesota finished off the win with a 15-13 fifth set win. Wisconsin started with a 3-1 lead, only to have Minnesota come back and tie it, 3-3. A Samedy kill pushed the lead to 7-5 and she added a second kill as the two teams changed sides at 8-6. Pittman provided a kill for a 9-7 lead, while Hart pushed the lead to 10-7 as the Badgers called a timeout. The Badgers came back to put the Gopher lead to one at 11-10 off two kills as Minnesota called a timeout. Minnesota held a 13-11 lead, only to have Wisconsin respond and tie the set at 13-13. Minnesota called a timeout and the Gophers responded with two straight on a kill from Samedy and a Wisconsin attack error.

UW had 78 digs to Minnesota’s 75. Libero Tiffany Clark had a match-high 24 digs, including a diving save into the bench during the first set.

At the net the Badgers had 12 stuffs thanks to six blocks from Madison Duello and five blocks apiece from Tionna Williams and Dana Rettke.

“Like I told these guys downstairs, we’re a few points here from possibly being undefeated in this league, and instead, we’ve lost three game fives. But the thing is, as we’ve gone through the season, coming off of each loss, I’ve thought we’ve responded the right way, we’ve learned, we’ve grown. They’re probably tired of the learning and the growing right now, but we’ve got no choice. It’s a long season, we’ve got fifteen more matches.

“I think people are pretty bummed, but I think we’ll see people coming back on Friday ready to get after Michigan State, another opportunity. That’s one of the great things about this conference, is that there’s always another great opportunity right in front of you.”

It was over when

After trading the first four sets, the Badgers and Gophers kept things close to begin the fifth frame until Minnesota took a three-point lead at 10-7.

The Badgers would claw back to tie the set at 13-13 behind kills from Lauryn Gillis and Dana Rettke. That’s as close as they would come as Minnesota terminated the next two points to take the match.

The Badgers hit the road this weekend for a faceoff at No. 14 Michigan State in East Lansing, Michigan, at 3 p.m.

Why set the ball when you can get the kill? pic.twitter.com/NZVxrzG5Kk