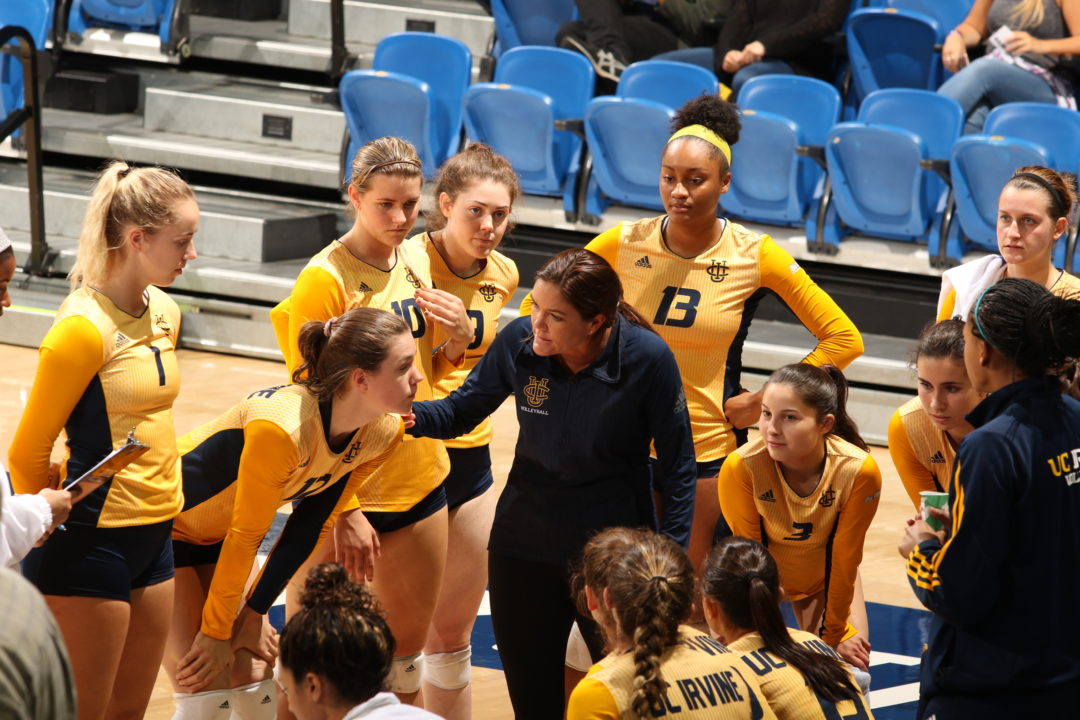 2017 UC IRVINE VOLLEYBALL BY THE NUMBERS

A former setter for the Anteaters, Ashlie Hain took over as UC Irvine’s head women’s volleyball coach in 2015. After consecutive 13-win seasons, this year’s squad has already equaled that win total with signature victories over Pac-12 opponent, California, and a recent comeback against UC Davis, where the Anteaters fought back from a 2-0 deficit to win in five. VolleyMob caught up with Coach Hain before the team’s match against rival, Long Beach State, to get her thoughts about the team, the program and the future of volleyball at UC Irvine.

VM: How have your past experiences prepared you for this position?

AH: I never imagined coming back as a head coach. I played here in 2003 and 2004, the only two years we went to the NCAA Tournament, and there’s a special bond with the program when you’ve got that sort of history. Our coach, Charlie Brande, expected a lot of us when we were here and we were able to beat Missouri in the first round of the NCAA playoffs. I knew the program could return to a nationally recognized place.

VM: What were the specific circumstances that brought you back?

AH: When this job came open a few years ago, I told myself it would be interesting, but wondered whether I would be qualified with just junior college coaching experience. But my mom told me, “Hey, it’s your dream job. You can do it.” I think my mom knew me better than I knew myself so I put my name in the hat. Then, after talking to my old coach and Kniff [David Kniffin, head men’s volleyball coach], it became more like a personal calling. When I got down to doing the interview, I was on the verge of tears because I knew I was meant to do this.

VM: How did things go at first?

AH: I think everyone knew I wasn’t coming into a powerhouse of a program. It has had its ups and downs, and hadn’t been to the NCAA Tournament since I was playing. Also, my vision was different from the previous coach’s philosophy and practice standards so it was hard for some of them to buy in. Another coach told me, “It’s like making the girls watch a movie they didn’t buy tickets to.” I thought that was well-said. I think they made every effort to get on board, but, at times, there was a disconnect because that was the way and now this is the way.

VM: Tell us more about the first two seasons.

AH: My first year we beat Oregon, Louisiana State and #20 San Diego—big wins that we couldn’t quite maintain. Then, in my second year, we knocked off #7 USC and Long Beach State twice. But the next day after one of the Long Beach wins, we lost to Cal State-Northridge. It has been like that consistently over two seasons: great wins, tough losses. The Northridge loss taught us not to think too fondly of ourselves after one win. But it’s like parenting: they’ve got to fall a couple of times and learn on their own. And while I thought we’d be better because of it, I honestly didn’t think we’d be as good as we are right now. The culture is exactly what we want it to be at this point.

VM: Where did you feel your team would be at this point in the season?

AH: I thought we’d be a little bit above .500 right now and to be 13-2 feels pretty good, but we’re not getting caught up in that number and I think it’s because we have buy-in and the right culture. We play incredible defense and play with a lot of heart. Our outsides are six foot at best, our middles are inexperienced and we have a good setter and libero, and that’s taken us pretty far. We have to serve and pass to play with anyone at the national level because we’re not big. That’s really been our key and I’m really proud of what this group has accomplished so far.

VM: What milestones do you have for the program?

AH: The first milestone is a Big West Championship. Once we get there, we can look at what we can be on a national scale. We don’t say, “Hey we have the best start in program history. Mission accomplished.” We want to be ranked in the top 25 every year or receiving votes. I think we can be competing with the best.

VM: What has surprised you most about the season so far?

AH: Well, it’s my third year so not much can surprise me. I knew we could play great defense but putting the ball away was going to be an issue. And it has been, but less of an issue than I thought it was going to be. Our setters have been able to get our hitters one-on-ones most of the time. Every year has curve balls, like the injury to one of our outsides, Loryn Carter, who’s been out all season. We were really counting on her to play.

VM: What has surprised you least?

AH: Our defense. We read a book called Grit over the summer and the girls wrote summaries that really went above and beyond. I felt like they really liked and enjoyed it and you see it on the court. This weekend in particular: The grit, heart and passion, is the category we won. We didn’t win in any other statistical category. That’s the least surprising since I’ve felt that buy-in since the off-season. I remind them every day they have to work for what they get.

VM: Tell us about the comeback win against UC Davis.

AH: Davis is a good, young team. They’re athletes. They have a different lineup every match so they’re hard to scout. They also had a great crowd, about 1,000. Our serve-and-pass was awful and, like I said, we don’t match up well if we don’t serve and pass. Being down two sets to none, I think they knew it was bad and there was that sense of urgency in Set 3. Serving got better and there was the mindset of, “Hey, we gotta do this.” The third set was just heart. They beat us in every statistical category but heart.

VM: How about the win against California or other matches that stand out?

AH: Cal is a good team, more physical than us. We out-served, out-passed and out-dug them, which got our middles going in transition. We’re not the big bangers who can win out of system. The Cal win was nice. They had a good crowd and big band. I think they were kind of in shock about the type of volleyball we can play. We also beat good Illinois State and Kennesaw State teams. With every match we won, someone different stepped up. It wasn’t just Harlee [junior opposite Harlee Kekauoha] or Haley [junior outside Haley DeSales]. This past weekend it was Danika Ferguson, a redshirt freshman middle who hasn’t played much. She came in, worked hard, got good touches, transitioned at key times, got kills at crucial times and sparked us. Against UNLV, it was our setter Ali [junior setter Ali Koumelis] and Luna [senior libero Luna Tsujimoto]. The team wants to play well for each other.

VM: Are there any players who may not get the headlines that you want to call out as contributing to your culture?

AH: We have a 6-foot middle, Idara Akpakpa, who always has a great attitude and work ethic. People have seen her growth. If you saw her at Texas the first weekend of her freshman year when people were out with injuries, her growth has been tremendous. And the people who have been here see that and it helps with buy-in. Another is senior Brianna Montgomery, who now plays outside for us, but was a serving specialist who literally went in, served a couple of balls and came out. She’s 5-10, but does the most with what she has. She can jump and bang. And the girls respect her because she embraced and ran with that small role last year. It wasn’t like “Hey, I have to lead the team in kills to be a contributor.” We won the Long Beach matches last year because of her key serves at crucial times and now she’s rewarded with that bigger role.

VM: How have transfers played a role in your success?

AH: Several players doing well are transfers. I knew Ali from high school. I liked her, but I was at a junior college. She found me after playing at Portland. Luna went to Ohio State and just missed home. The feedback we get from transfers is they find happiness here. I’m sure there are some bad days, but, for the most part, they have the same message that they want to be here so that makes me feel good about what we’re doing.

VM: What sort of kids are you recruiting?

AH: We’re looking for the grittiest players we can find. I was like that. I was a 5-7 setter who couldn’t jump. It was more about our passion and discipline, so I know it can be done. We’re not just looking for a top 10 recruit. We’re looking for those who can be successful under us. The ones we have now are mostly our recruits and we don’t find ourselves micromanaging the gym. The girls are all ultra-competitive and want to win and if that means, “hey, you’re my best friend, but I have to beat you out,” so be it.

VM: Anything else you’d like to say about your team?

AH: We love this group because they work hard and it’s about who they are. We’re not talented or big. We just have a lot of heart.