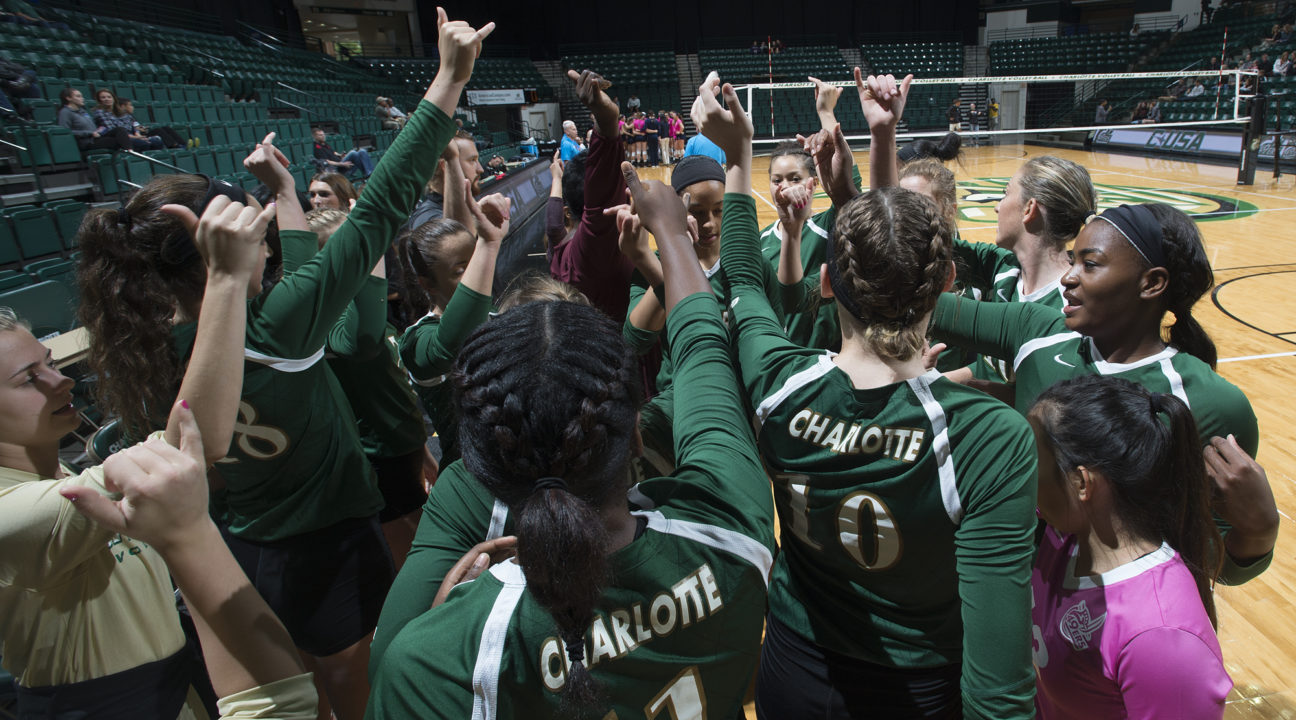 Charlotte volleyball will open up the 2018 season hosting their annual Charlotte Invitational and will play 14 matches inside the always tough Conference USA and engage in 11 home matches inside Halton Arena. Current Photo via Charlotte Athletics

CHARLOTTE, N.C. – Charlotte volleyball will open up the 2018 season hosting their annual Charlotte Invitational as Head Coach Karen Weatherington announced the 30-game slate on Thursday morning. The 49ers will play 14 matches inside the always tough Conference USA and engage in a total of 11 home matches inside Halton Arena.

The Niners will get things going August 24th-25th hosting the Charlotte Invitational welcoming Virginia Tech, Presbyterian, USC Upstate and Elon to Halton Arena. The first road contest of the year follows that Tuesday heading to crosstown rival Davidson on August 28th. The opening month of August and beginning of September will take place in the Bronx during the Fordham Invitational.

Upon the return home from New York City, the 49ers will head south to Columbia to battle it out with the Gamecocks at 7:00 p.m. on September 5th. That weekend, a trip to Greenville awaits in three matches of the ECU Invitational. The final tune-ups before C-USA play will take place at N.C. Central in Durham on September 11th while the final non-conference weekend will see the 49ers take on South Florida, New Orleans and North Florida in the USF Invitational. The 49ers will grind it out through 16 matches to open the year before jumping into league play.

“We are excited about the 2018 campaign,” Weatherington said. “The schedule includes Power Five opponents Virginia Tech and South Carolina, as well as USF and ECU from the American Athletic Conference. These matches align us against up-and-coming programs in the southeast region and will allow us to test our resolve in the preseason.”

C-USA play opens up September 21st and 23rd in a road trip to Marshall and WKU before the league home-opener a week later on September 30th vs. Florida Atlantic. Weekend #3 in C-USA action opens up October at Southern Miss and North Texas before the next three will bring the Niners home for six of their final nine contests.

Middle Tennessee and UAB come to Halton Arena October 12th and 14th before UTSA enters on the 19th. The back end of the UTSA weekend will close out with a road contest at Florida Atlantic before finishing off the month of October with FIU and Louisiana Tech at home. The final three matches in a push towards the Conference USA tournament will see the 49ers travel to Rice and UTEP November 2nd and 4th before senior day on November 10th against Marshall closes out the home slate.

“This season also features eleven home matches that afford us great opportunities to build momentum and grit during the C-USA season,” Weatherington said. “We can’t wait for the 2018 campaign!”

The 2018 Conference USA Championships will once again feature the top eight teams in the league who will all gather at Marshall in Huntington, W.Va. November 16th-18th. The tournament’s winner will claim the league’s automatic berth into the NCAA Championships.