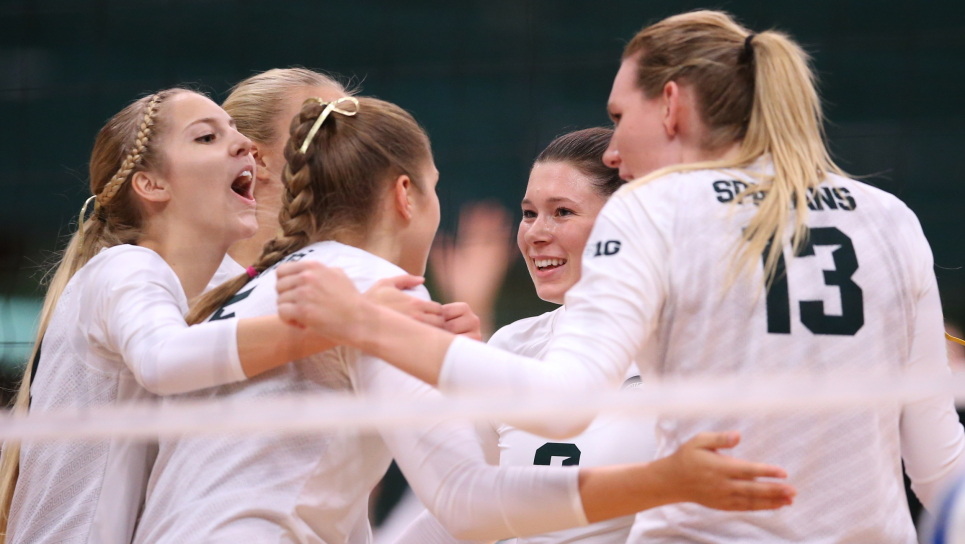 #11 Michigan State finished their regular season with a four-set victory over Indiana on the Hoosiers' Senior Night in Bloomington, Indiana. Current Photo via Michigan State Athletics

BLOOMINGTON, Ind. – In the final regular season match for both teams, #11 Michigan State rebounded from a tough loss at #17 Purdue Friday night with a four-set win over Indiana on the Hoosiers’ Senior Night. The 14-6 Big Ten conference record for Sparty is the best under coach Cathy George and fourth-best in program history. MSU (RPI: 17) now awaits the NCAA Committee and their Selection Show tonight at 9PM Eastern Time on espnU.

Michigan State was led by Marquette transfer Autumn Bailey with 16 kills, hitting .333, while adding 13 digs and 5 aces. Those 5 aces tied her previous high as a Spartan. She had 7 aces in a match once while she played at Marquette. Indiana native Brooke Kranda had 13 kills, hitting .345, with 2 blocks. Holly Toliver matched Bailey’s double-double with 12 kills (.550) and 10 digs. Setter Rachel Minarick ran the offense efficiently (.356) with 40 assists and filled the stat sheet with 9 kills, 7 digs and 3 blocks. Libero Jayme Cox matched Bailey with a team-high 13 digs.

Indiana honored seniors Jessica Leish and Kristen Ostach after the match. Leish finished with 9 kills, 2 digs and a block in her final match for Indiana. Leading the way at the net was sophomore middle blocker Deyshia Lofton with 13 kills (.688) and 4 blocks. Redshirt sophomore outside hitter Kendall Beerman contributed 11 kills and 5 digs on the night. Junior Elizabeth Asdell finished with a match-high 5 blocks. Sophomore setter Victoria Brisack dished out 42 assists in one of the Hoosiers’ better offensive performances of the season (.242). She added 9 digs and a team-high 3 aces. Freshman libero Bayli Lebo ended her season with a match-high 21 digs.

On a positive note for the Hoosiers, Deyshia Lofton finished her season with a .332 hitting percentage, which is fifth-best in program history for a single year. Another positive is that Indiana has already broken ground on a new volleyball facility, Wilkinson Hall, that will open in the fall of 2018. The Hoosiers had been playing in University Gym since 1987.

While the Hoosiers were celebrating their two seniors, it was sophomore Deyshia Lofton who put on a show for the home crowd, finishing with 13 kills and hitting .688. Senior Jessica Leisch contributed nine, and Kendall Beerman contributed 11 kills.

Autumn Bailey had her 10th double-double in Big Ten play with 16 kills and 13 digs; she also hit .333 and tied her MSU best with five service aces. Holly Toliver also had a double-double with 12 kills and 10 digs, hitting .550. Rachel Minarick flirted with a triple-double, amassing nine kills and seven digs to go with her three blocks and 40 assists. Brooke Kranda rounded out the double-digit kill performers with 13 kills, two blocks, and two digs.

Playing on the road for a second consecutive senior night, the Hoosiers wanted to leave a good impression for their home crowd in their final game at University Gym, as the Hoosiers will open a new volleyball facility in the fall of 2018. The Spartans rallied back in the first set from a 9-5 deficit to post a 25-19 victory behind Autumn Bailey‘s four kills and four aces in the set. The second frame went to the home team, 25-23, as IU once again jumped out to an early lead (9-4). MSU trailed by as many as six but rallied to tie the set at 19-19, but Indiana used a mini 3-0 run to pull ahead 22-19 and held on for a two-point win, 25-23.

The NCAA selection show will air live on Sunday at 9 pm ET on ESPNU.MSU came out of the set break between two and three with a different execution level, and took the third set by a 25-14 score. MSU hit .500 in the set, (16-0-32), siding out at 80 percent and getting four kills from each Autumn Bailey and Rachel Minarick. The Spartans continued to hit well in the fourth, recording 14 kills and hitting .353. MSU had just two hitting errors in the final two sets after 12 in the first two.

QUOTABLE
“We started the match a bit sluggish and had to clean up our game. I was pleased with the way we responded in the third and fourth sets – we were much more polished and purposeful and I think it clearly showed. We now need to get back home and get some rest, and we will learn our NCAA fate tomorrow night.”

Senior Jessica Leish, who played in her last match in an Indiana uniform tallied nine kills for the match. Freshman Bayli Lebo led the Hoosiers with 21 digs and sophomore setter Victoria Brisack had 42 assists, three aces and nine digs.

The Hoosiers (12-20, 1-19) out-blocked the Spartans and junior captain Elizabeth Asdell record five blocks. Lofton had four blocks and sophomore Hayden Huybers had three blocks to go along with five kills.

After they dropped the first set to Michigan State, Indiana showed their fight coming back in the second set. Leish was a driving force for the Hoosiers in set two, with five kills. Indiana never trailed in the second set and got out to a 9-4 lead. Michigan State tied the set 19-19, but kills from Leish and Lofton and a Spartan attack error put Indiana up 22-19 and they took the set, 25-23.

With Michigan State up four at 22-18, the Hoosiers came all the way back to within one at 24-23 on a block by Asdell and Huybers. Following a Michigan State timeout, the teams played a back and forth rally that ended on an Indiana ball handling error to give Michigan State the set and the match.

Indiana concluded their final season at University Gym, which began when they started playing at the gym in 1987. The Hoosiers future home, Wilkinson Hall is currently under construction and is set to open next season.