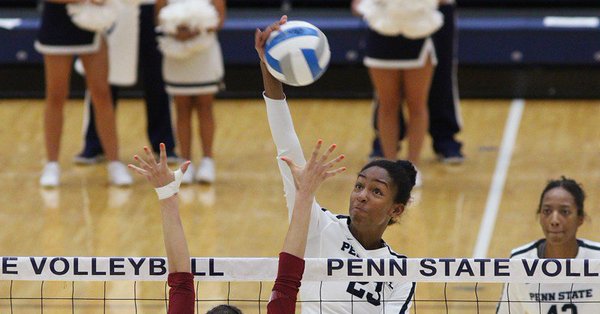 Carly Skjodt led all hitters with 15 putaways for the Wolverines, while hitting .273 and turning in nine digs. Paige Jones followed with 11 kills on a .318 clip. Cori Crocker was the team’s best blocker with three stuffs.

PSU jumped on top 6-2 in Set 1 and soon led by five at 10-5. Michigan rallied with eight of the next 10 to grab the lead at 13-12. Penn State countered with six straight points, including two blocks and a kill by Gray, to go up 18-13. The Wolverines never got closer than four after that and Penn State ended the stanza on a 3-0 run, including an Emily Sciorra ace and a final solo stuff by Reed.

The teams tied nine times in Set 2, last at 17 all. Back to back kills by Parker capped a 5-0 run to make it 21-17 Penn State. Michigan called timeout and scored four of the next six to narrow the gap to two at 23-21 with help from two PSU miscues.  The Nittany Lions took a break of their own and Parker and Leath came through with putaways to cap the 25-21 win.

Penn State built a 9-5 lead in Set 3 and despite a tie at 9, maintained control. A stuff by Gray and Bryanna Weiskircher pushed the advantage back to three at 13-10 and two Gray putaways and a third from Leath gave the Nittany Lions a five-point edge at 18-13. The Wolverines chipped away, pulling within two at 22-20 with help from two PSU errors and kills by Skjodt, Paige Jones and Katarina Glavinic. Back to back kills by Reed put Penn State on the hill at 24-21. Crocker and Skjodt held the Nittany Lions at bay temporarily, before Parker finished off the sweep.