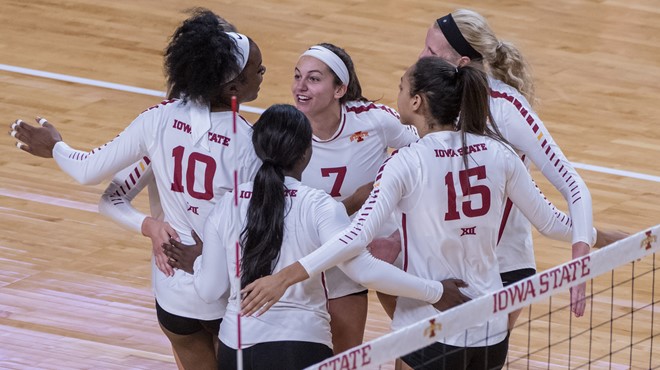 #14 Iowa State and Wisconsin quickly swept their foes Friday evening to meet on Saturday night in Round 2. Current Photo via Iowa State Athletics

#14 Iowa State is hosting one of the 16 pods around the country, thanks to their awarded bid and #14 overall seed from the NCAA Selection Committee. Both #14 Iowa State and Wisconsin quickly swept their opponents to meet in Round 2 on Saturday evening.

Wisconsin led off the Ames pod by sweeping Marquette, a team the Badgers defeated earlier in the season. Wisconsin moves on to Round 2 Saturday evening.

The Badgers were led offensively by freshman outside Grace Loberg, who came off the bench in the middle of the first set and finished with 11 kills on 20 errorless swings (.550). She was joined in double-digit kills by Dana Rettke and Kelli Bates, who also posted 11 kills on the night. Rettke filled the stat sheet with 4 digs, 3 blocks and hit .400 against the Eagles. Bates had the match’s lone double-double by scooping 10 digs. Setter Sydney Hilley had a well-rounded day by dishing 42 assists to the .337 offense. Hilley also had 4 kills, 4 digs, 2 aces and a block. Libero Tiffany Clark finished with a match-high 19 digs.

For the Golden Eagles, Anna Haak did all she could to carry the squad, leading the way with a team-high of 11 kills and 8 digs. Allie Barber added 10 kills for the Big East runner-up team. Setter Lauren Speckman distributed 27 assists while also adding 5 digs and an ace to the cause. Libero Martha Konovodoff finished with a team-high 9 digs.

In the second match of Day 1 of the Ames pod, the home crowd was treated to an efficient match from the Cyclones in a sweep of Princeton, the Ivy League champions. The win moves ISU to a Saturday night match-up against Wisconsin.

Grace Lazard tied a career-high with 14 kills, hitting .522 on the night. Jess Schaben recorded a double-double with 14 kills (.297) and 11 digs. Schaben also added 3 blocks. Avery Rhodes blocked a match-high 7 balls to go along with her 7 kills. Setter Monique Harris also produced a double-double with 35 assists and a match-high 16 digs. Libero Hali Hillegas dug 14 balls against the Tigers.

Princeton was led offensively by Maggie O’Connell with 11 kills. Setter Jessie Harris had Princeton’s lone double-double with 26 assists and a team-high 13 digs.