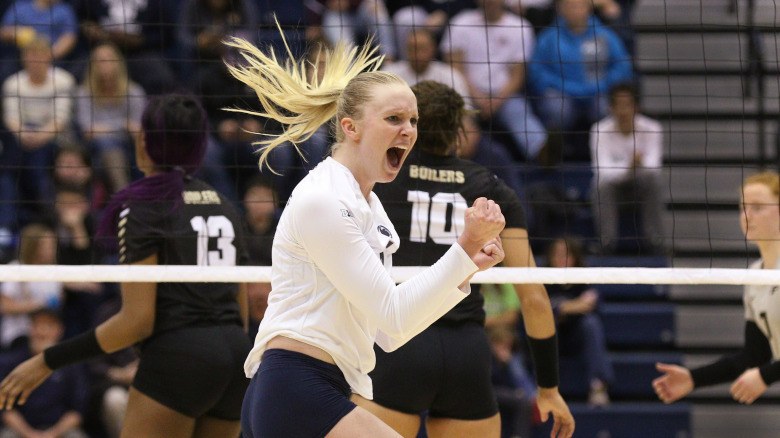 Penn State battled through the first two sets before struggling to come out on top in the third set. Illinois played a good offensive game in the third and earned the win. Although the Lions found themselves behind in the fourth set, they came back from a 4-1 deficit to take the last win of the regular season.

Despite not finishing in the top spot in the Big Ten, Penn State still has a shot at making the NCAA Volleyball Tourney. The announcements will be made Sunday night at 9 p.m.

Four Nittany Lions scored in double figures during the contest, with junior outside hitter Simone Lee leading the group once again. The Menemonee Falls, Wis., native led the squad with 20 kills while adding five digs.

Fellow outside hitter Ali Frantti posted 16 kills, seven digs, three assists, a pair of blocks and ace in the contest. Classmates Haleigh Washington and Heidi Thelen posted 10 kill each. Washington had four digs, a block and an ace, while Thelen posted a team-best two blocks.

Once again, freshman libero Kendall White led the back row defense, posting 16 kills in the outing.

Penn State commanded the first set, cruising to a 9-2 lead and the team never looked back. Lee and Thelen posted four kills each while Washington and redshirt freshman Tori Gorrell each had three as PSU posted a .375 hitting percentage in the opening frame. The Nittany Lions also scored on the three aces in the first set of action, as the final one came from Detering to make the score 24-16. Illinois fended off a pair of set points before Thelen’s fourth kill sealed it, 25-18.

The second set went back and forth, with the teams tying 19 times and the lead changing six times in the second frame. After tying at 19-19, Penn State pulled ahead twice, forcing Illinois timeouts at 21-19 and 23-20. After the second Illini break, Illinois tied the match at 24-all. After a Penn State timeout, back-to-back kills from Lee and Thelen sent PSU into the locker room up 2-0.

PSU struggled in the third set, with 12 total errors between attacking and the service line costing the team. Lee posted a set-best five kills in the third frame, but Illinois played a clean set to earn the 25-19 victory.

Penn State had to dig itself out of a 4-1 hole in the early going in the fourth, but kills from Washington, Lee and Frantti powered Penn State to a 7-7 tie. The two sides tied six more times before back-to-back kills from Lee and Washington again made it a 15-13 PSU edge. Illinois called for time. Lee tacked on three more hammers for a 19-16 lead, forcing the second Illinois timeout. The Illini came within one before Penn State used a 5-2 run at the end the final set, with Washington’s 10th kill making the final set score 25-21.

–Penn State moves to a 51-9 advantage in the all-time series against Illinois and leads 24-3 in matches played at home in Rec Hall.

The Illini finish the regular season with a 17-14 overall record and a 10-10 mark in the Big Ten Conference, and will await their postseason fate until Sunday evening’s NCAA Selection Show on ESPNU at 8 p.m. CT. The Nittany Lions conclude the season with a 22-9 mark and a 14-6 finish in the league.

Freshman Jacqueline Quade paced the Illini with a team-high 14 kills and only four errors in 28 swings for a .357 hitting percentage. Senior Michelle Strizak joined her in double figures with 11 kills, five digs and four blocks.

The Nittany Lions started quick, scoring the first four points of the match en route to an 8-1 lead. After PSU took its largest advantage of the set at 16-6, the Illini used a 7-3 run to close within 19-13, capped by a solo block from senior Katie Stadick. The two teams traded points before back-to-back scores gave the Lions set point at 24-16. Kills from senior Naya Crittenden and sophomore Ali Bastianelli fought off a pair of set points, but a Hedi Thelen kill finished off the first in favor of the home team.

It was a different story in the second set as the score was tied 19 times during the stanza, with PSU breaking through with three-unanswered points to grab a 21-19 edge. After the two teams traded points, a Simone Lee kill put the Nittany Lions up 23-20, but the Illini battled back with three of the next four points to knot things at 24-24 on a Quade ace. Back-to-back kills then gave PSU a 2-0 advantage in the match with a 26-24 set two win.

Out of intermission, it was a set of runs as the Illini raced out to a 5-1 lead highlighted by a pair of blocks from Bastianelli and sophomore Jordyn Poulter. With the Illini holding a 10-6 advantage, PSU used four-straight points to even the score at 10-10, but four of the next five points went to the Orange and Blue for a 14-11 IU edge. The Nittany Lions again knotted the score at 18-18, but a 7-1 Illini run closed the door in the third as back-to-back Strizak kills sealed the 25-19 triumph in the third.

The Illini continued their strong play into the fourth to jump out to a 4-1 edge on a Strizak kill, but PSU came back to tie things at 7-7. From there, it was a back-and-forth affair until the Nittany Lions broke a 16-16 tie with four-straight points for a 20-16 advantage. The Illini would twice cut the lead to one at 20-19 and 21-20, but PSU closed out the match by scoring four of the final five points for the 3-1 victory.

Crittenden and Bastianelli each came within one kill of double figures with nine on the night as the Illini registered a .302 hitting percentage in the match, while PSU hit at a .329 clip. Poulter posted 41 assists in the contest to go along with eight digs.

Junior Brandi Donnelly turned in a match-high 18 digs for the Illini.

As a team, Illinois totaled 12 blocks to the Nittany Lions‘ five, with Bastianelli pacing UI with six stuffs.