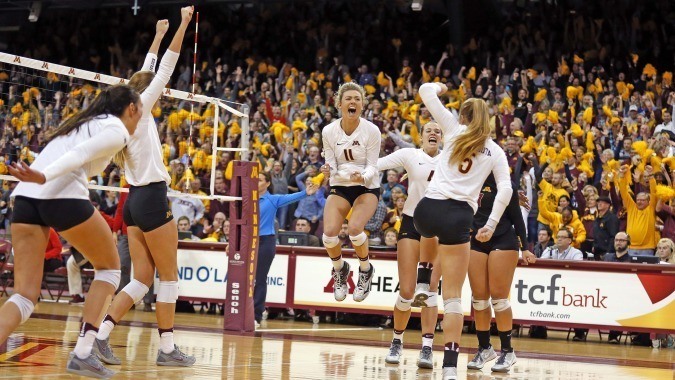 While both the 2nd-ranked Minnesota Gophers and the 3rd-ranked Wisconsin Badgers are destined for top-four seeds when the 2016 NCAA Women’s Volleyball Tournament brackets are announced on Sunday evening, there was still something left to play for in Minneapolis on Saturday.

In the biggest matchup of the final day of the regular season, the Minnesota Golden Gophers knocked off the Wisconsin Badgers to not only keep the latter from sharing the Big Ten title with Nebraska, but to also finish the season with a perfect 13-0 home record. The Gophers, so long as they keep winning, will expect to host in Minneapolis up until the Final Four in Columbus, Ohio.

Aside from a flop in set 3, Minnesota controlled most of this game – including hitting percentages of .415 and .632 in the 4th and 5th sets, with the game on the line, respectively.

Playing the last regular season game of her career, and on senior night, Paige Tapp had 21 kills (2e, 32ta, .594) in the game, including an incredible 17-0-27 run in the last two huge sets for the Gophers. Sarah Wilhite added 23 kills (3e, 53ta, .377) and a team-high 19 digs. While Molly Lohman struggled to find her spots offensively, she did add 8 blocks to the Gopher effort.

Tapp and Wilhite preached “belief” after the game. “I thought we had a lot of belief, even though we didn’t play like we wanted to in the 3rd set, we never stopped believing,” Wilhite said. “We just really connected and stayed unified through the whole thing.”

“We gave it a heck of a run there,” Wisconsin head coach Kelly Sheffield said. “Like I told our team, I think we showed how far we’ve come since the previous time that we played them and can we continue to get better.

“The team is bummed, there was an opportunity there, but I’m not even giving them the night. Usually it’s like, ‘By the time you wake up tomorrow, this is gone’ but we said that by the time they get on the plane tonight, the match is forgotten about. We’ve improved quite a bit since the previous time that we saw them, so how much more improvement can we do in whatever time that we have together?”

With the win, Minnesota finished the season with 10 straight victories. The last 4 were all over top-25 teams: #14 Michigan State, #18 Michigan, #1 Nebraska, and #3 Wisconsin. In spite of Minnesota not winning the Big Ten Championship, there’s a case to be made that they could be announced as the #1 overall seed on Sunday evening.

Miss last night's match? Watch these highlights as the #Gophers defeated the Wisconsin Badgers last night at the Sports Pavilion.

As a team, Minnesota had 64 kills, 81 digs and nine blocks. Sarah Wilhite earned a double-double with 23 kills and 19 digs. Samantha Seliger-Swenson also earned a double-double with 51 assists and 16 digs. Paige Tapp earned a career-high 21 kills, hitting .594. P Tapp had 14 kills alone in the first two sets, while Wilhite went 17-0-27 in the last two sets and 7-0-9 in the fifth set.

Minnesota will see what lies ahead in the post season following the NCAA Selection Show this Sunday on ESPNU at 8 p.m. CT.

Set 1: Wisconsin outhit the Gophers .279 to .103 to take a 1-0 lead. After the two teams tied at 9-9, Wisconsin pulled ahead 12-9 as the Gophers called their first timeout of the set. After the break, Wisconsin added to its lead at 13-9, but committed its fourth service error of the set to give the Gophers a sideout. After an ace by Wilhite and back-to-back kills from P Tapp, the Gophers tied the set at 13-13. Minnesota later took a 15-14 narrow lead on a H Tapp/Lohman block, which forced Wisconsin to call a timeout. The Badgers came out of the break and went on a 4-1 run and a 19-16 lead. The Gophers called a timeout and responded with a Hart kill and a sideout. Wisconsin built a 23-19 lead before P Tapp added two kills to cut the deficit to 23-21 as the Badgers used their second timeout. Another P Tapp kill put the Gophers within one, but the Badgers closed out the set with a 25-22 win.

Set 2: Minnesota evened the match with a 25-17 second set win. As a team, the Gophers hit .294 to Wisconsin’s .125 and added two blocks. The Gophers also added a 77 percent sideout mark. The two teams traded points and leads until the Gophers took an 18-16 lead, as the Badgers called a timeout. After a Badger point, Minnesota went on a 7-1 run and won the set, 25-17. The Gophers went up, 21-17, after a P Tapp kill, and forced Wisconsin to call a timeout. Minnesota, however, had two kills by Hart, followed by another P Tapp kill for set point. The Gophers closed out the set on a Wisconsin attack error to tie the match, 1-1.

Set 4: The Gophers earned a 25-17 fourth set win to send it to a game five. The Gophers hit .415 to Wisconsin’s .256. Minnesota took a 10-7 lead off a P Tapp kill and later a 13-9 lead off a Lohman/Hart block as the Badgers called a timeout. Despite Wisconsin cutting the Gopher lead to two at 15-13, Minnesota went on a 3-0 run for an 18-13 lead off a Wilhite kill. The Badgers called a timeout, their second of the set. Minnesota built a 21-15 lead off back-to-back kills from Wilhite. A block from Lohman/Hart pushed the Gophers to 23-16, while a Hart roll shot at the back line added set point. She followed with a kill down the line to even the match, 2-2.

Set 5: Minnesota jumped out to a 4-1 lead in the fifth set as the Badgers called a timeout. The Gophers went up 8-4 off a Hart kill, while a P Tapp ace pushed the score to 9-4 and a Wisconsin timeout. P Tapp added another kill to push the score to 11-4. After a kill by Lohman to make it 12-5, Hart added a kill at 13-6. Wilhite put the match at set point, and ended the match with a kill off the block.

“We gave it a heck of a run there,” UW head coach Kelly Sheffield said. “Like I told our team, I think we showed how far we’ve come since the previous time that we played them and can we continue to get better.

“The team is bummed, there was an opportunity there, but I’m not even giving them the night. Usually it’s like, ‘By the time you wake up tomorrow, this is gone’ but we said that by the time they get on the plane tonight, the match is forgotten about. We’ve improved quite a bit since the previous time that we saw them, so how much more improvement can we do in whatever time that we have together?”

Williams led all Badgers with five blocks, while Nelson stuffed three blocks and Haggerty and Kriskova each tallied two.

Wisconsin surged to a 12-9 advantage to start the match, forcing Minnesota to use a timeout after back-to-back attack errors. The Gophers responded with a 6-2 run, reclaiming the lead at 15-14. Following a Minnesota timeout, the teams went point for point to bring the set to a close, and Wisconsin edged out a 25-22 set victory.

Minnesota tied the match 1-1 by holding Wisconsin to a .125 hitting percentage in the second frame. UW stayed hot on Minnesota’s trail, forcing 11 tie points, up to 16-16. The Gophers then pulled away on a 9-1 streak, winning the set, 25-17.

The Badgers rebounded to a commanding 25-11 win in set three, holding Minnesota to its lowest point total in a set this season.

Wisconsin battled in hopes of a four-set victory, trailing by just four points, 13-9, at its first timeout. The Gophers offense widened the margin, hitting 20 kills and only three errors in the frame, and claimed set four, 25-17, to force a decisive fifth period.

Minnesota’s Sarah Wilhite took control of the final set, hitting seven kills in the 15-8 win. Wisconsin trailed 6-4 after consecutive UW kills, but the Gophers offense ran away with the match on a 9-4 surge.

“In game five,” Sheffield explained, “their offense was really good, but that was really predicated by their defense. We had some really nice swings, really good swings, but they were just making phenomenal defensive plays and Wilhite just took over the fifth.”

The Badgers now look ahead to the postseason, expecting to hear their named called when the NCAA volleyball championship bracket is announced on Sunday.

The 64-team bracket for the 2016 NCAA Volleyball Championship will be announced at 8 p.m. on ESPNU.