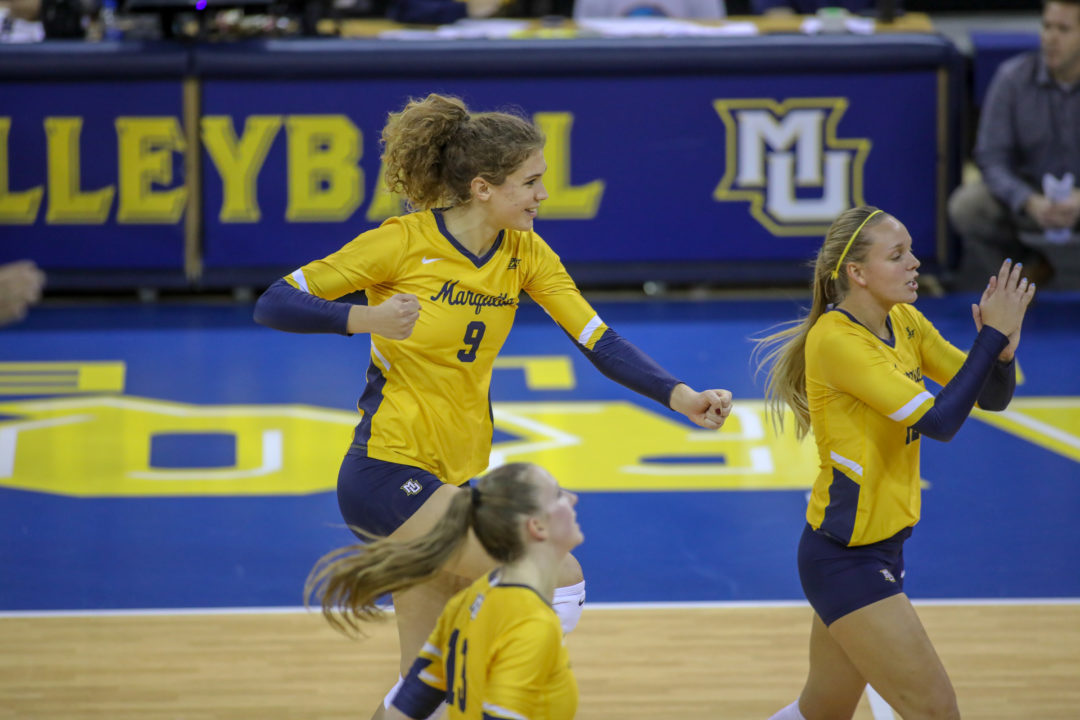 #17 Marquette edged closer to the top of the Big East standings with a sweep of Butler; DePaul picked up a four set win over Xavier to wrap up its five-match home stand.  Current Photo via Maggie Bean/Marquette Athletics

Marquette moved to within a half game of Big East leading Creighton Wednesday night. The Golden Eagles took care of business at home with a sweep of Butler. In Chicago, DePaul jumped out to an early two set lead and then held on to beat Xavier in four sets.

DePaul picked up its third Big East win of the season Wednesday night. The Blue Demons took down Xavier in four sets behind a match-high 19 kills from Emma Price.

DePaul got off to a great start in the first set, as it raced out to an early 10-4 lead. The Blue Demons continued to play well, extending their lead to 24-18. Xavier didn’t go down without a fight, as it reeled off five straight to cut the deficit to 24-23 before a kill by Avarie Evans-Allen gave the Blue Demons the set, 25-23.

With the score tied at 8 apiece in the second, DePaul used a 5-0 run to take a 13-8 lead and take control of the set. Once again, Xavier managed to cut into the lead, drawing within one at 19-18. DePaul then used a mini 4-0 run to get some breathing room before finishing the Musketeers off, 25-21.

The third belong Xavier as it jumped out to a big 11-2 lead early on. DePaul managed to cut the deficit to five at 20-15 before the Musketeers took the set, 25-17.

DePaul bounced right back and took a commanding 10-3 lead to open the fourth set. The Blue Demons cruised to the finish line, 25-20 to capture the win.