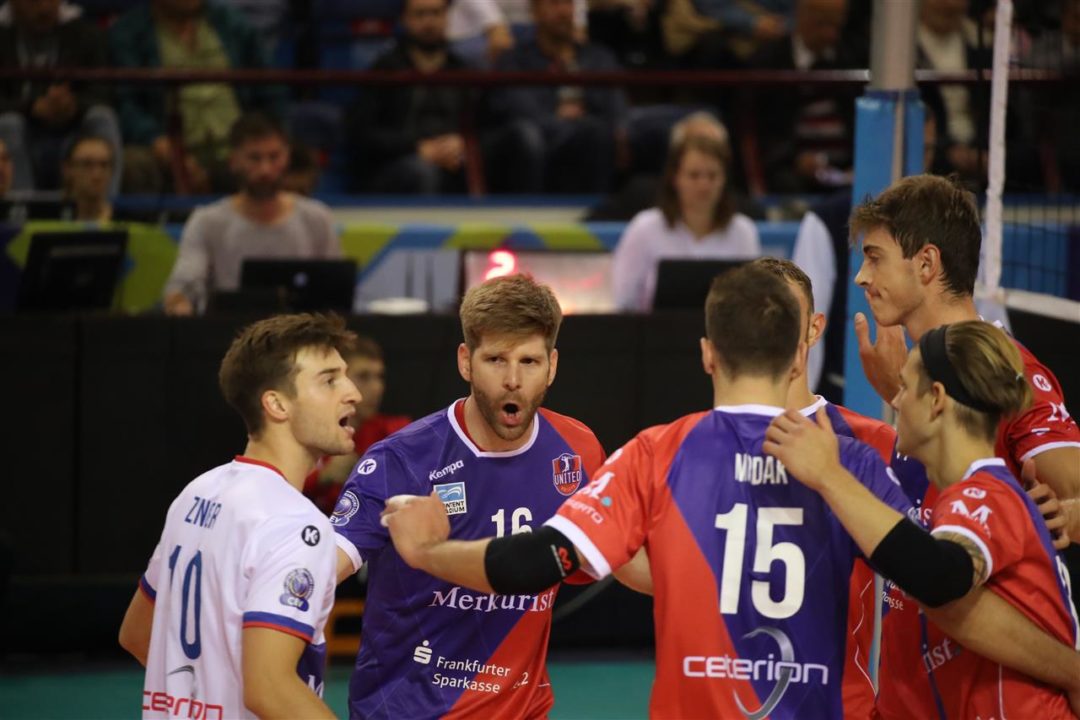 United Volleys of Frankfurt went on the road to Belarus and made quick work of Shakhtior. Adam Kocian set the German side to a 49% hitting percentage in the sweep that lasted only 80 minutes. Most of his offensive production came from Moritz Karlitzek, who finished the match with 14 kills on 24 swings and only 1 attack error. The outside hitter also contributed a block and finished with 15 points. Karlitzek was matched by Milija Mrdak’s 15 points. The opposite also scored 15 points on 12 kills and 3 blocks.

Sebastian Schwarz only added 5 points to the stat page for United Volleys.  He only hit 27% and his 4 kills were accompanied by 3 attack errors. Tobias Krick scored 7 points in the middle on 5 kills and 2 blocks. Lucas Van Berkel, the other middle blocker, finished with 4 points on 3 kills and 1 service ace.

Viachaslu Shmat led Shakhtior with 12 points on 9 kills, 1 block and 2 aces. Volodymyr Tevkun scored 8 points on 8 kills, but he also committed 6 hitting errors. Shakhtior did not get much production from their outside hitters. Antti Sakari Makinen put away 6 kills, finishing with 6 points, and Aleh Khmialeuski scored 4 points. Khmialeuski only put away 2 kills with 3 errors.

United Volleys just need a win or a loss in 5 sets to advance to the 2nd Round. Shakhtior needs to win in 3 or 4 sets to face a Golden Set to 15 points and move on to the next round. The teams will play again in Germany on October 17th.

Teodor Salparov made his return to the Champions League after leaving Zenit Kazan. The Bulgarian libero only played the first set in the 3-1 win. He made 2 service receptions, and only half of them were rated as positive. He was replaced by Martin Ivanov, who passed 71% of his receptions positively. Saveli Pozdniakov and Dmitry Yakovlev both paced Neftohimic with 10 points each. Pozdniakov led the team with 7 kills. Iliya Petkov had a peculiar night. He had 9 points, but no blocks and only 1 kill. He put forth an astonishing 8 services aces at 2 aces per set.

Radoslav Janjic and Andrija Divljan both paced OK Mladost with 12 points each. Divljan put away 11 points but with 6 attack errors. He also registered a service ace.  Janjic scored points on 8 kills and a match-high 3 blocks. He actually was the only player from Ok Mladost to finish with any blocks at all. The next-highest scorer for the team came from Jovan Cendic. He put away 5 kills in a 50% hitting performance in the defeat.

The two teams will play again on October 17th in Bulgaria. Neftohimic just needs to win or lose in 5 sets to secure a place in the 2nd Round. OK Mladost needs to win in 3 or 4 sets to force a Golden Set in which they must win in order to progress.