#17 Michigan Fights Back to Defeat Illinois in 4 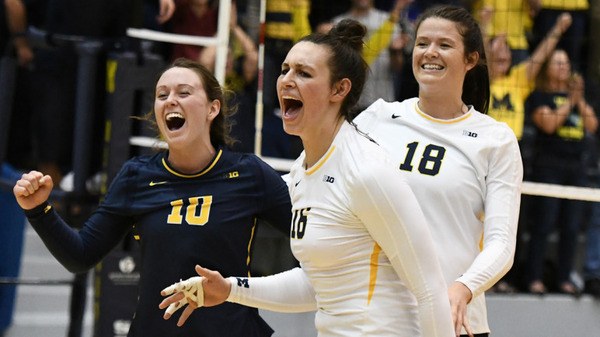 Michigan’s victory was a tight match after losing the first set. The rest of the games were won with just 4-point margins or less.

Four Wolverines had double-figure kills, and another 4 had double-digit digs. Jenna Lerg finished with 19 kills for her 22nnd match this season with at least 10 digs. Michigan continued the domination, earning 10 blocks and serving up 11 aces.

Illinois took the first point of the evening on a service ace, and though Michigan took a lead on back-to-back kills from Abby Cole, the Illini rallied to go ahead 12-6 early on. Despite the deficit, Michigan fought back, using timely kills from Kelly Murphy and Cole to come within three at 17-14 and force an Illinois timeout. The teams battled from there, and though Michigan tied the score at 23-23 on a service ace from Jenna Lerg, Illinois took set one, 25-23.

Trailing 1-0, Michigan took the first point of the second set, but the points went back and forth from there. Neither team maintained a lead until back-to-back kills from Katherine Mahlke and a service ace from Cole put the Wolverines up at 13-10. From there, Illinois strung together three consecutive points to tie the score once more, but a .351 team attack average and six kills from Murphy propelled the Wolverines to a 25-23 second-set victory.

With the match tied at one set apiece, the third set of the night was grueling for both teams. Mahlke started off the third frame with a kill, and solo block from Cole put the Wolverines up 8-4 early to force an Illinois timeout. Following the stoppage in play, Michigan jumped out to a 14-6 lead on kills from Murphy and Carly Skjodt, which forced the Illini to burn their final timeout of the set. From there, however, Illinois came back to tie the set four times, but a 4-0 Michigan run ended the set at a 25-21 score.

Illinois took the first point of the final set, jumping out to a 6-1 lead to force a Wolverine timeout early in the frame. Despite the deficit, Michigan launched a 6-2 run including back-to-back service aces from Murphy to come within one and coerce an Illini timeout. Following the stoppage in play, a kill from Claire Kieffer-Wrighttied the game and allowed Michigan to jump back out to a three-point lead, but the Illini continued to battle, knotting the score at 22-22. Despite a tough Illinois offense, a kill from Skjodt and two straight service aces from MacKenzi Welsh ended the set, 25-22, awarding Michigan a four-set victory.

Overall, Michigan had four players with double-figure kills in the match for the first time since an Oct. 22 victory over Penn State. Murphy led the charge for the third-straight match, totaling 15 kills on the night, while Skjodt picked up 13, and Kieffer-Wright added 12 at a .308 clip. Mahlke also finished the match with 10 kills.

Defensively, the Wolverines also had four players earn double-figure digs, marking the first time since Michigan last played Illinois in the 2015 regular-season finale. Lerg led Michigan for the 25th straight match, picking up 19 for her 22nd match this season with digs in the double digits. Welsh also totaled 13 digs on the night for an assist-dig double-double, while Skjodt (13 digs) and Murphy (12 digs) recorded kill-dig double-doubles.

Michigan was also strong at the net defensively, earning 10 team blocks for the first time since a five-set loss to then-No. 1 Wisconsin in mid-October. Cole led the Wolverines with six total blocks, while Kieffer-Wright added four and four others registered at least one block-assist.

In total, the Wolverines recorded eleven service aces in tonight’s match — including the game winner — marking their highest ace performance since Oct. 17, 2009.

Up Next: The No. 17-ranked Wolverines will return to action on Saturday (Nov. 5) when they host the visiting Northwestern Wildcats to cap off another Big Ten weekend. First serve is set for 7 p.m. inside Cliff Keen Arena.

Strizak led the Illini with a match-high 17 kills on 40 swings and only five errors for a .300 hitting percentage to go along with nine digs and three blocks, while Crittenden added 13 kills on the night.

After an ace from senior McKenna Kelsay, who earned her first-career start as an Illini in the match, started the night, the Illini jumped out to a quick 9-4 lead. The Illini would push the advantage to 16-9 with a Crittenden kill and looked to take the opening set in dominating fashion as a Wolverine service error made it 22-16 in favor of the visitors. Michigan responded with a 7-1 run to knot the score at 23-23, but back-to-back kills from senior Katie Stadick and Strizak put the Illini up 1-0 in the match.

It was a back-and-forth affair in the second as neither team grabbed more than a two-point lead until the Wolverines pulled ahead at 13-10, but three-straight Illini points tied things up at 13-13. With the set all square at 19-19, UM put together three-straight points for a 22-19 advantage. The Illini again answered back to even the set at 22-22 on a block from Strizak and sophomore Ali Bastianelli, but the Wolverines then took three of the next four points to tie the match at 1-1.

Following an early 4-4 tie in the third, the Wolverines raced ahead to a 14-6 edge midway through stanza. Down, but not out, the Illini rallied to knot the score at 18-18 with an 8-2 run – including four-straight points and capped the run with back-to-back blocks. With the set tied at 21-21 after trading points, the Wolverines took the momentum back with four-straight points and a 2-1 advantage in the match.

The Illini responded with a fast start in the fourth to take a 6-1 edge – including four points on the serve of senior Danielle Davis – but a 7-2 run from the home team evened things at 8-8. From there it was a battle as neither team held more than a three-point lead throughout the remainder of the set. As the period entered its ninth and final tie at 22-22, a Carly Skjodt kill followed by back-to-back service aces propelled the Wolverines to the 3-1 victory.

As a team, the Illini bested the Wolverines with a .221 hitting percentage to UM’s .186 clip, while also outblocking the home team, 10-12. Bastianelli paced the Illini block with nine stuffs and added nine kills in the loss.

Junior Brandi Donnelly totaled a team-high 18 digs, with senior McKenna Kelsay, who earned her first-career start as an Illini, smashing previous career-high with 10 digs on the night.

Up Next: Illinois will face Michigan State Saturday night at 5:30 on the road.