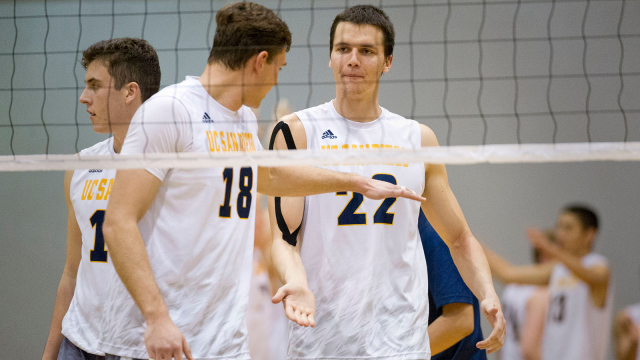 #17 UCSD improved to 7-2 for the first time in the program's 30-year history in a sweep of Princeton Wednesday night in La Jolla. Current Photo via UCSD Athletics

The host Tritons were led offensively by Tanner Syftestad, the national leader in kills, points and attacks per set. He managed 10 kills on only .138 hitting, yet his 4 digs, a career-high 3 solo blocks and 2 aces helped in the sweep. Alec Flowers and Wyatt Harrison both pounded 9 kills each, with Flowers’ .538 hitting percentage tops among all attackers. Harrison added a match-high 3 aces for the hosts. Making his season debut Wednesday night was Xander Jimenez, coming on in the middle of the second set down 14-13. Jimenez finished with 6 kills, hitting .308, and adding 2 digs and a block. Setter Milosh Stojcic ran the offense to a .275 clip with 33 assists. He also added a team-high 7 digs and blocked 4 balls of his own. Bryan Zhu led all blockers match-wide with 5 on the evening.

LA JOLLA, Calif. – The University of California San Diego has been playing men’s volleyball for 30 seasons, since 1989.

The Tritons are 7-2 for the first time.

UC San Diego pulled out a dramatic and lengthy third set to complete a 3-0 sweep over Princeton University in non-conference action Wednesday night at RIMAC Arena. Set scores were 25-21, 25-23 and 34-32.

With the result, UCSD has already equaled its win total from a 7-20 2017 campaign.

The Tritons fended off four set points in the third as Princeton tried desperately to extend the contest, but on the sixth match point, UC San Diego finally prevailed as senior captain Tanner Syftestad went back to serve, and the Tigers managed an attack error.

Syftestad finished with 10 kills, two service aces, four digs, three blocks, all of the solo variety, and one assist. The Tritons won, in a sweep, despite just a .138 hitting percentage (10-6-29) from the national leader in kills, points and attacks per set.

Redshirt sophomore outside hitter Xander Jimenez provided a big spark off the bench in his season debut after recovering from injury. He entered in the second set on the heels of a 6-0 run which gave the visitors a 14-13 edge, and wound up with six kills, including one to close out that second frame, while attacking at a .308 rate (6-2-13) and adding three digs and a key block assist on a huge triple block late in the third.

Freshman outside hitter Wyatt Harrison followed a Nathan Thalken kill by serving three successive aces in game one. After the first timeout of the night by the Tigers, an attack error made it a 5-0 stretch for the hosts, and a 10-6 advantage. Moments later, however, a 4-0 Princeton run had levelled matters at 11-11. A Triton triple block by Harrison, Stojcic and senior middle blocker Bryan Zhu (San Diego/Rancho Bernardo HS) broke a 15-15 tie. After the teams traded singular miscues, UC San Diego notched four of the next five points, around Princeton’s second timeout, and up 21-17, hung on the rest of the way. Harrison led all players with 5.5 points in the frame on his three aces, two kills on five swings without an error, and block assist.

A thunderous solo stuff by Thalken made it a fourth straight point for UCSD in the second, and following a Tiger timeout, an awry attack saw the Tritons ahead, 12-6. Syftestad’s tough dig opened the door for a Harrison kill and 18-16 edge. Successive kills by the newly-inserted Jimenez, the first one off the block, overturned a 20-19 deficit and ignited a 5-0 run. The other three points were all Princeton hitting errors, the last two on Syftestad solo denials of Greg Luck. Down 24-20, the Tigers earned the next three points, but it was Jimenez onto the scene again to put UCSD in command.

Princeton’s lone triple block came at 4-4 in game three, but preceded four consecutive Tiger hitting mistakes, the last three of which came with Triton blocks, first by Stojcic and Zhu, then Zhu by himself, and finally by Harrison and Zhu. A kill and two aces meant a 3-0 mini-run by 6-foot-11 Tiger middle George Huhmann and forced a UCSD timeout, trailing 18-17. Out of the break came a Jimenez kill and a triple block by Flowers, Jimenez and Stojcic to flip the edge.

Harrison and Alec Flowers contributed nine kills apiece to the Triton cause, with Flowers hitting a match-high .538 (9-2-13). Zhu got to a match-best five total blocks.

Princeton, idle since Jan. 12 due to final exams, dropped to 1-5 following the opener of its three-match California trip. The Tigers are at No. 2 UCLA on Thursday night. Huhmann (14) and Luck (10) reached double figures in kills, with Huhmann serving three aces, and Parker Dixon collected a match-high 10 digs.

Despite a spirited battle in the third set, the Princeton men’s volleyball team dropped its first match of a California road trip 3-0 to UC-San Diego Wednesday night. After the Tritons took the opening sets 25-21 and 25-23, Princeton pushed hard in the third before ultimately falling 34-32.

Sophomore middle George Huhmann led the Tigers with 14 kills, and he added eight digs, three aces, two blocks and two assists in the match, while classmate Greg Luck had 10 kills and three digs. Parker Dixon led the defense with 10 digs, while Junior Obohadded seven kills and three blocks in the match.

Freshman setter Joe Kelly paced the offense with 37 assists, while classmate Jess Hunt had three kills and four digs in the match.