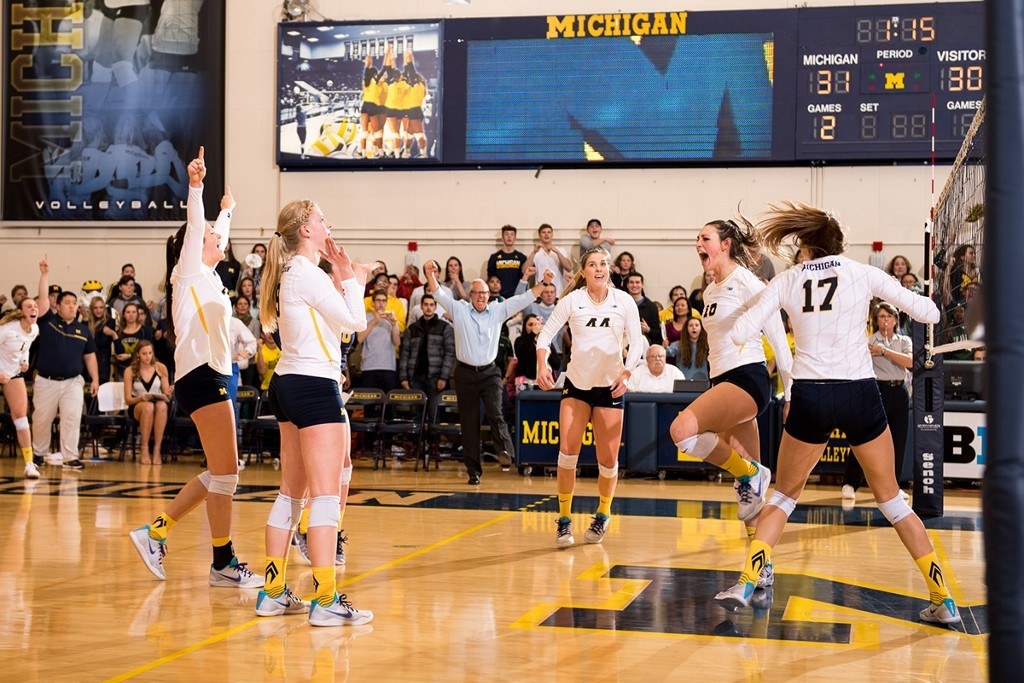 Michigan had a .455 average in the first set, with every hitter recording a kill in the first set 25-16 victory. The Wolverines dominated the Spartans through the second set, only giving up 11 points and totaled 7 blocks.

The third set was a war for both teams, neck and neck with 11 tied scores. A double-block from  Wolverines Kelly Murphy and Cori Crocker claimed the match for Michigan.

ANN ARBOR, Mich. — Less than two weeks after dropping at four-set match to its in-state rival in East Lansing, the No. 18-ranked University of Michigan volleyball team swept the visiting No. 14-ranked Michigan State Spartans in dramatic fashion Wednesday night (Nov. 23) inside Cliff Keen Arena. The victory improves the Wolverines‘ home record to an impressive 15-2 on the season.

The Wolverines came out of the gate strong in the first set, boasting a .455 attack average behind six kills from Claire Kieffer-Wright. After jumping out to a 3-0 lead to begin the night, Michigan never surrendered its lead, using kills from every hitter en route to a 25-16 first-set victory.

Though Michigan State kept pace with the Maize and Blue for the first few points of the second set, the Wolverines cruised out to a 10-4 lead to force a Spartan timeout. From there, however, Michigan launched an offensive attack with seven unanswered points for a lead of 13 points. Holding the Spartans to a -.103 kill percentage in the second set, the Wolverines hit for a .450 average in set two, siding out at 90 percent and totaling seven team blocks in the 25-11 win.

Following intermission, the third set was a grueling battle on both sides of the court, as both teams refused defeat. The Wolverines again jumped out to a 3-0 lead, which they maintained until the Spartans used a four-point run to tie things up at 20-all. Despite leading by as many as four in the set, Michigan was forced to trade points with its rival well past the 25-point mark thanks to 11 tie scores and six lead changes late in the match. With the last tie of the night at 30-30, a Michigan State attack error and a double-block from Kelly Murphy and Cori Crocker sealed Michigan‘s 3-0 sweep of the Spartans.

Leading Michigan offensively was Kieffer-Wright, who finished the evening with 12 kills at a .476 clip for her seventh straight match with kills in double figures. Abby Cole also recorded 10 kills on the night, while Carly Skjodt finished just short of double digits with nine. Guiding the Wolverines‘ offensive showing was MacKenzi Welsh, who tallied 35 assists on the night while also picking up five kills of her own on no errors.

Defensively, Kieffer-Wright led Michigan at the net for the 18th time this season, recording seven blocks. Crocker followed her lead with six — a personal best in three-set matches during conference play.

From the back row, Jenna Lerg led the charge with a match-high 14 digs, including nine in the final set. Murphy also recorded digs in double figures with 11, while Skjodt and Tiffany Clark each finished with eight.

Up Next: Michigan will finish up their regular season Saturday against No. 1-ranked Nebraska Cornhuskers on the road at 7 p.m.

MSU’s worst hitting night in Big Ten play (34-24-110, .091) was also in conjunction with the host Wolverines hitting .450 in the first two sets, allowing the home team to take significant,, insurmountable leads as Michigan had just four hitting errors in those first two frames. The third set was MSU”s best, but the teams needed to go deep into extra points, a set the Wolverines pulled out by a 32-30 edge.

Claire Kieffer-Wright led the home team with 12 kills and hit .476, adding seven blocks (three solo). while Carly Skjodt had nine kills and eight digs. The Spartans got eight kills and four blocks from Alyssa Garvelink, and Allyssah Fitterer had six kills and three blocks, while pushing her career kill total past 1,000. She is the 22nd Spartan to achieve 1,000 career blocks.

The Spartans move into the final match of Big Ten play, and head to Iowa City to take on the Hawkeyes Saturday evening.

QUOTABLE:
“We really didn’t get going until the third set, and credit has to go to Michigan for keeping us out of sorts. I thought we played much better in the third, which looked a lot more like the sets between these teams 10 days ago at Jenison. We’ll take stock of ourselves tomorrow and get some rest – because we know that we’re going to get an “A” effort from Iowa in their building on Saturday.”

Up Next: The Spartans will finish their regular season against the Iowa Hawkeyes on the road Saturday at 8 p.m.