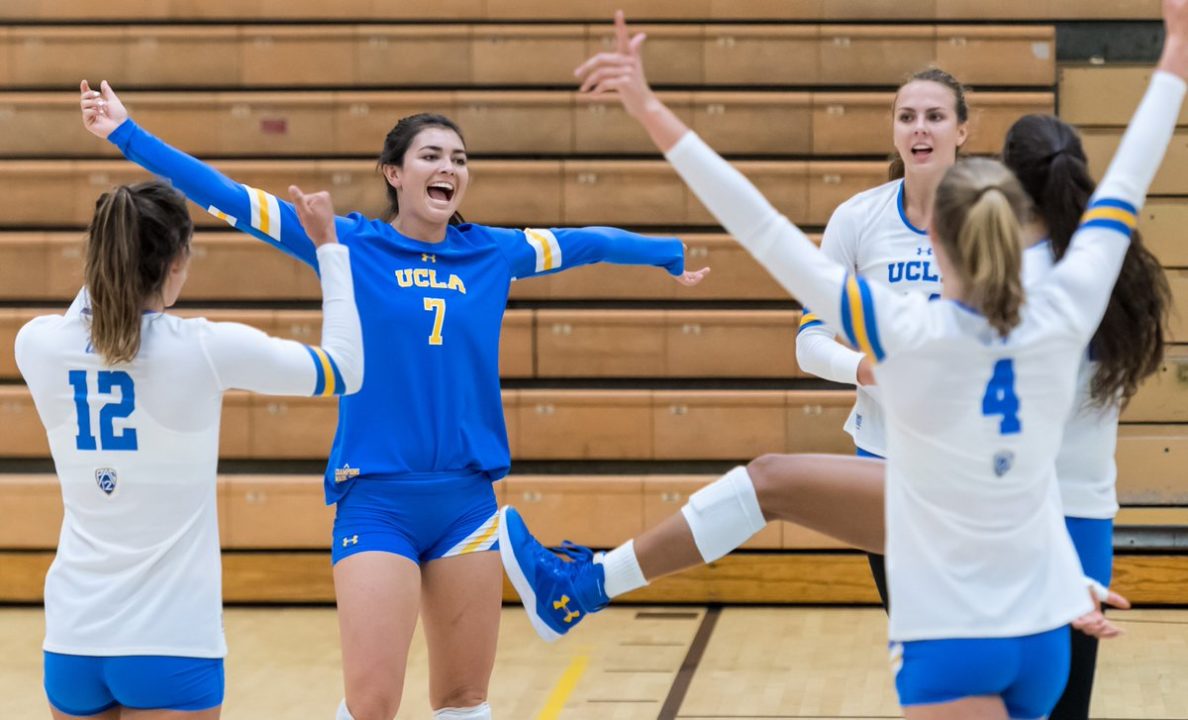 #19 UCLA traveled to the Galen Center on Saturday and swept their crosstown rivals, #12 USC, before a crowd of 5,116. Archive Photo via UCLA Athletics

With seeding implications for the 2017 NCAA Tournament on the line, the #19 UCLA Bruins defeated the #12 USC Women of Troy in consecutive sets before 5,116 fans at USC’s Galen Center.

USC entered the match ranked 11th in the latest RPI, a key factor in determining the 16 tournament seeds, while the Bruins came in at 24th. Seeded teams also host the tournament’s opening rounds.

The win leaves UCLA in a fifth-place tie with #21 Colorado in the final Pac 12 standings. USC completes conference play tied for second with #8 Washington.

Next up, both teams learn their 2017 NCAA Tournament fate when the brackets are announced Sunday night at at 6 p.m. PT on ESPNU.

? MATCH RECAP
Despite the loss, we still love our seniors and thank them for everything they've done for this team this season. #FightOn, senior class! ✌??https://t.co/ZhSTmuHtQx

The Bruins (19-10, 12-8 Pac-12) only trailed twice in the opening set at 2-1 and 3-2, as three in a row on a Buechler kill and two USC attack errors put the visitors up for good. After a sideout, four straight on kills by Gates, Mosser and Buechler and a Trojan attack error made it 9-4. At 14-12, a 7-1 Bruin run busted it open, as Gates, Buechler and Mosser had kills, Sponcil and Gates combined on a block and USC made three errors. Nine would be the Bruins’ largest lead at 23-14 and 24-15, as an attack error on UCLA’s fourth set point wrapped up a 25-18 win. Buechler led the Bruins with seven kills, while Gates and Mosser each had three. Sponcil posted seven digs to go with her 11 assists and Simo added four digs, as the Bruins out-hit the Trojans .222 to .020.

With USC (22-9, 14-6 Pac-12) leading 6-5 in set two, a 5-0 Bruin run on two Mosser kills, one apiece from May and Sponcil and a Trojan service error put UCLA up 10-6, a lead it would not relinquish for the rest of the set. At 13-9, a Mosser kill and a Buechler solo block would give the Bruins their biggest lead of the second at six points. UCLA would hold a 24-21 edge before USC saved all three of those set points. A Gates/Sponcil block gave the Bruins a fourth set point, but USC countered, while a Trojan service error made it five set points, but again USC evened things up. Another Trojan service error at 26-all earned the Bruins a sixth set point and Buechler closed things out with a kill to win the second 28-26. Mosser posted four kills in the second, while Buechler and May each had three. Muno added five digs. The Bruins were out-hit .250 to .154.

Set three featured 12 ties and six lead changes. USC was up 14-11 before a 6-2 UCLA run on two Mosser kills, two Rogers blocks, one with Mosser and another with Sponcil, and two Trojan errors made it 17-16. USC would go back ahead and lead as late as two at 21-19, but five of six for the Bruins on kills by Buechler, Gates and Sponcil and two USC errors gave UCLA two match points. The Trojans saved them both, but back-to-back errors by USC gave UCLA a 26-24 victory. Gates led the Bruins with five kills, while Mosser added four. Sponcil recorded five digs to go with her 13 assists and Simo added four. The Bruins were out-hit .262 to .250.

The Bruins will learn where their NCAA Tournament journey begins on Sunday when ESPNU airs the Selection Show at 6 p.m.

UCLA led the second set by as many as six points, but behind 12 kills from Lanier, the Trojans forced a fifth tie at 24-all when Mosser’s shot went long. The Bruins claimed set point three times before Buechler’s kill stopped the USC comeback. The Trojans hit .250 and had 17 kills (7e) on 40 attacks and were well in front of UCLA’s .154 outing (13k, 7e, 39att) but couldn’t overcome untimely errors.

The Trojans led for most of the third set despite 12 tie scores. USC led, 21-19, on back-to-back kills by Lanier, but Sponcil earned a 23-22 lead for the Bruins on her kill of an overpass. UCLA claimed match point at 24-22, but Lanier and Withers earned kills to save a pair before consecutive USC errors closed out a 26-24 win for the Bruins. USC had 18 kills (7e, 42att) for a .262 hitting percentage.

The Women of Troy now await selection and seeding into the 2017 NCAA Tournament. When chosen, USC will appear in the program’s 35th all-time NCAA bracket; 27th consecutive. Selections will be announced live on ESPNU at 6 p.m. PT on Sunday, Nov. 26.

USC fell to 57-53 in all-time matches against UCLA in the 110th meeting between the two teams.

The Trojans finished the regular season with a 14-6 Pac-12 record and in a tie for second place with Washington.

So. OH Khalia Lanier registered her eighth double-double of the season with 27 kills and 12 digs. It is her 24th-career double-double match.

Lanier matched her career high with her 27 kills.