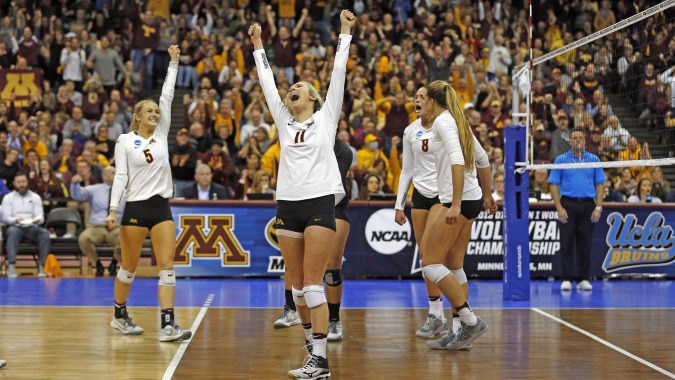 MATCH STATS #2 Minnesota sweeps #10 UCLA in 3 to advance to Semifinals Minnesota is 29-4 and remain undefeated at home... Current Photo via Minnesota Athletics

The No. 2 Minnesota Gophers just punched their ticket to the National Semifinals for the second year in a row with a dominating 3-0 sweep of #10 UCLA Bruins.

Gophers Molly Lohman, Samantha Seliger-Swenson and tournament MVP Sarah Wilhite were named to the All-Tournament team. Wilhite led the Gophers with 15 kills and 8 digs, and Alexis Hart followed with 11 kills.

Minnesota is set to face No. 6 Stanford Thursday, Dec. 15 at Nationwide Arena in Columbus, Ohio. The winner of the match will play in the Championship match against the winner of Nebraska-Texas for the national title.

The University of Minnesota volleyball team swept UCLA on Saturday night 25-23, 25-20, 25-22 to advance to the National Semifinals for the second straight year. The Gophers improve to 29-4 on the season, and remain undefeated at home for the second season in a row. All-tournament team members from Minnesota were Molly Lohman, Samantha Seliger-Swenson, and tournament MVP Sarah Wilhite.

As a team, Minnesota put up 12 blocks to UCLA‘s 7, hit 46 kills, and had 61 digs. Wilhite lead the Gophers with 15 kills and eight digs, while Alexis Hart had 11 kills. Hannah and Paige Tapp both had seven kills, putting up a combined 11 blocks. Molly Lohman added five blocks and four kills. Dalianliz Rosadoestablished 17 digs, while Katie Schau had eight and Alyssa Goehner had seven. Samantha Seliger-Swenson added a double-double with 35 assists and ten digs.

The Gophers will face No. 6 Stanford in the National Semifinals in Columbus, Ohio next Thursday at 6 p.m. CT.

Set 1: The Gophers hit .270, erasing an early lead to come back and win the first, 25-23. UCLA opened the contest with a 5-0 lead, which forced Minnesota to call a timeout. Minnesota cut the UCLA lead to 9-7 with a Hannah Tappkill. UCLA, however, built back a 14-8 lead as the Gophers called their second timeout. Minnesota cut the Bruin lead to 17-14 off a Lohman/Hart block as UCLA used its first timeout. Trailing 19-17, Minnesota came back and took a 21-20 lead. A block from P Tapp and Wilhite pulled the Gophers within one, an ace by Rosado tied the set, while Seliger-Swenson provided a joust win to take a 21-20 lead and forced UCLA to take a timeout. The two teams tied at 21 and again at 22. Minnesota added kills from Wilhite and Hart for 24-22 and finished the comeback off a UCLA attack error.

Set 2: The Gophers hit .273 to the Bruins’ .156 to win the second set 25-20. Trailing 7-6, Minnesota rattled off a 7-0 run, six of which came on Rosado’s serve rotation. Minnesota later built a 16-9 lead off a Hart kill. With another Hart kill, the Gophers took a 19-12 lead. The Bruins cut the Gopher lead to 20-15, and later to three at 23-20. With Minnesota up three, the Gophers called their first timeout of the set. Minnesota came out of the break with an overpass kill from Wilhite and another overpass kill from Lohman to go up 2-0 on the match.

Set 3: The Gophers hit .160 to the Bruins’ .083 to win the third set 25-22, and take the match. Tied at 8-8, Minnesota went on a four-point run and a 12-8 lead, which forced UCLA to call its first timeout of the set. UCLA cut the Gopher lead to 13-11 before Wilhite responded with a kill off the block. UCLA came back and tied the set at 14-14, as Minnesota called its first timeout of set. The two teams remained tied five times, all the way up to 20-20. The Gophers pushed to match point, up by three, with a UCLA kill cutting the lead to two, but Wilhite would swing to end the set and match.