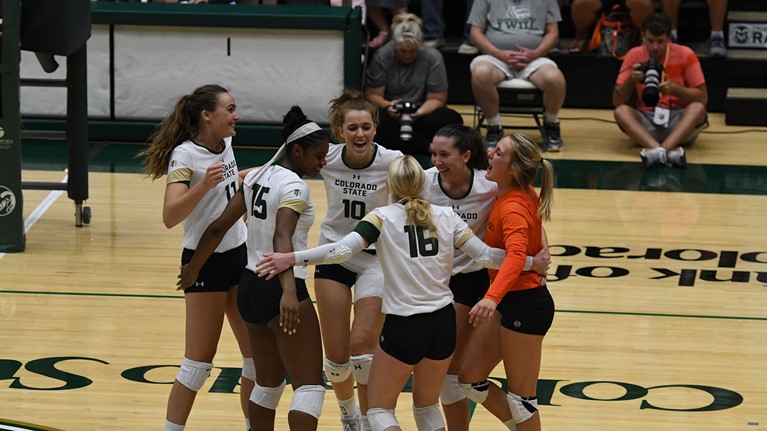 FORT COLLINS, Colo. – Upstart Ball State gave everything #20 Colorado State could handle, but the hosts proved to be too much in a hard-fought four-set victory.

Starting the match with as much as an eight point lead in set one, followed by having set point in hand in set two (25-24), it seemed the Cardinals were more than prepared for the Ram’s multinational attack. Too many weapons for CSU and too many untimely errors by the Cardinals doomed the visitors.

For the Cardinals, who led for a time in three of the four sets, Ellie Dunn led four BSU double digit attackers with 16 kills. Emily Holland had 11 kills, while Brooklyn Goodsel and Meg Starling had 10 kills each. Ball State actually outhit Colorado State in hitting percentage, .263-.241, but could not overcome CSU’s 12.5 blocks and 6 aces. Ball State stuck around in the match by outdigging Colorado State, 59-44. Running the Cardinal attack was setter Amber Seaman with 49 assists. Kate Avila led all defenders with 23 digs for Ball State.

In the nightcap for Colorado State, the Rams swept Michigan in a battle of top 25 programs.

FORT COLLINS, Colo. – No. 25 Colorado State started its tournament with a 3-1 win over Ball State on Friday afternoon in Moby Arena. The Rams dropped the first set, but rebounded nicely to take the first match of the day.

Colorado State finished the match at a .241 clip, while putting up 12.5 blocks.

Ball State started the match quickly, building an eight point lead before the Rams got in sync. Colorado State chipped away at the Cardinals’ lead and eventually tied the set at, 18-18. Ball State held its lead down the stretch, taking the first set 25-21.

The Cardinals kept their momentum going into the second frame, again building a 6-2 lead, but this time it wouldn’t last. The Rams came back to tie it 9-9 and went on to take the next four points to claim a 13-9 advantage. CSU looked to tie the match holding a lead, but Ball State came back and grabbed set-point at 24-23 and again at 25-24. Colorado State dug deep and rambled off three-straight points to come back and win the set, 27-25.

Following the comeback, the Rams gained confidence and turned the tables in game three, building a 9-2 lead early. CSU would go on to hold the lead the entire match and stuff a late-run by the Cardinals to take a one-set advantage in the match.
The fourth frame had a match-high eight tie scores and three lead changes. The Rams built a 4-1 lead to begin the set, but the Cardinals retaliated and took an 8-6 lead. The two teams would battle back-and-forth through the match – without anyone leading by more than two points. CSU eventually put together a five-point run to take an 18-13 lead – one that it wouldn’t relinquish.

The Rams will stay in Moby Arena and host No. 16 Michigan later today (Friday) starting at 6 p.m.

FORT COLLINS, Colo. – The Ball State women’s volleyball team opened play in the Colorado State University Tournament with a big statement, taking the opening set from the 25th-ranked Rams by a score of 25-21.

The Cardinals also held a 25-24 lead late in the second set, only to see Colorado State rally for the final three points. The Rams went on to win the final two sets as well, but it was not easy as Ball State made late runs in each for identical final scores of 25-22.

In fact, the Cardinals managed to out-hit one of the nation’s top attacking teams by limiting the CSU offense to a .241 (59-24-145) clip, well below the team’s average of .310 entering the match.

Ball State, on the other hand, connected for a .263 (57-22-133) rate of success which is the best mark for a CSU opponent this season and well above Colorado State’s defensive average of .154 entering the contest.

Four players finished the match with double digit kills for Ball State, led by 16 from junior outside Ellie Dunn (Sugar Grove, Ill./Kaneland). Dunn also finished the match hitting .297 (16-5-37), while earning a pair of digs and a solo block.

Second on the Ball State attack was Holland who registered 11 kills and hit .333 (11-3-24). She also tied for team-high honors with four total blocks.

Starling deposited double digit kills for the second straight match, with 10. It’s the first time Starling has registered back-to-back matches with 10+ kills in her collegiate career. She also tied Holland for team-high honors with four blocks.

Rounding our Ball State’s top contributors on offense was junior outside attacker Brooklyn Goodsel (Corry, Pa./Corry Area) who earned her first double-double of the season with 10 kills and 10 digs. She also netted a pair of solo blocks.

On defense, Avila paced all players with a season-high 23 digs, helping the Ball State defense as a whole hold a 59 to 44 advantage in the category. She also served up all three of the Cardinals’ aces in the match.

Seaman fell just shy of a double-double, dishing out 49 assists and collecting eight digs. She was also credited with a pair of kills and a block assist.

Colorado State’s Breana Runnels led all players with 19 kills, while Amanda Young was credited with a team-high 16 digs.