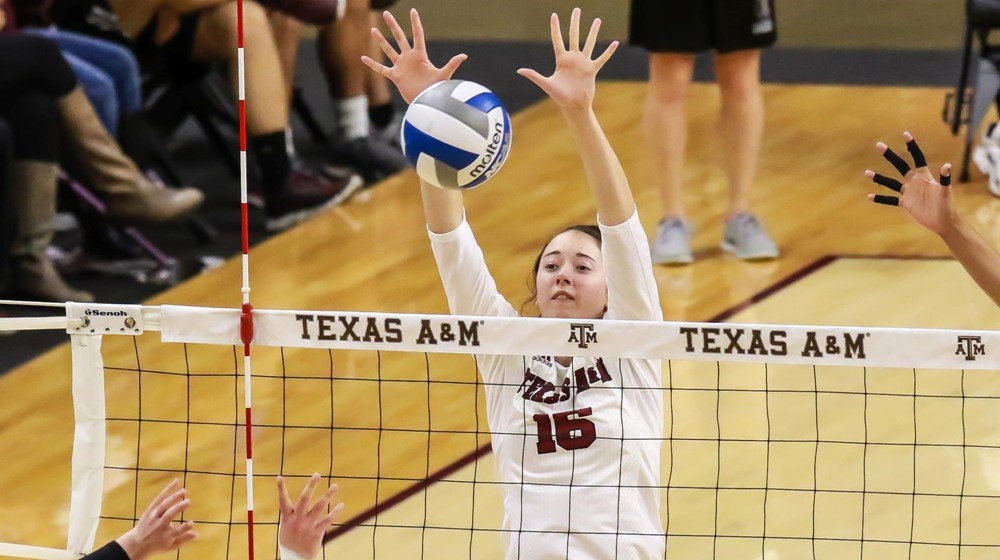 Texas A&M's Kaitlyn Blake will medically retire as the result of a medical condition that she's had since high school. Archive Photo via 12thman.com

6’2″ Texas A&M middle blocker Kaitlyn Blake has medically-retired from volleyball, the school announced on Friday. Texas A&M, in a press release, says that she has applied for a medical exemption from the SEC and will forego her senior season. Blake has “compartment syndrome,” which is a chronic condition that builds pressure within muscles to dangerous levels. Usually experienced during athletic exertion, the condition can decrease blood flow, essentially choking off the nerve and muscle cells from both oxygen and nourishment.

Blake says that she began feeling pain early in high school, but wasn’t diagnosed until she arrived at Texas A&M.

“It’s something that started mainly since the beginning of high school,” Blake explained. “We really never knew what it was until I came here and got it diagnosed. I played through it for the past three years and just thought maybe if I had a little bit of time off, maybe it would help, but I guess it really wasn’t my time. I think it is time for me to be done, time for me to turn in my jersey.”

Blake had a breakout season in 2016 as a sophomore, playing in all 108 sets and starting every match for Texas A&M. That year, she led the SEC and ranked 15th nationally in blocks with 164 (the 4th-best season in school history), and was 7th in the nation with 1.52 blocks/set.

After that season, she underwent surgery and sat out the spring season. The condition limited Blake’s training as a junior, but she still played in all 25 matches for A&M, and ended with a .294 hitting efficiency percentage.

“Blake has obviously been a huge impact on this program over the course of the last three years,” said new Texas A&M head coach Laura Kuhn, who was named the Aggies’ head coach in December. “We had watched film of some matches to see the players returning, and she also was an impact player in the SEC. We talked to other SEC coaches, and there were coaches that said she was probably one of their favorite middles in the league.

“Coming in, I talked to her a lot on the phone and knew she was kind of on the fence on whether or not she would really be able to play. It was good to be able to build that relationship with her in the spring and work through that decision-making process. We were very supportive of her as a staff because we knew she had to be all in, and she had to know that we would support her in whatever the decision was and make sure she was healthy as she could be.”

Blake says that she still intends to be around the program during her senior season and help out where she can, even if it’s not while playing. That includes working with the team’s young middles: the 5 other middle blockers on A&M’s roster enter 2018 with 4 combined varsity letters, including two freshmen.

After a period of middle blockers as a strength for the team, 2017 was very much a middle-blocker-by-committee year for the Aggies. They had 7 players with at least 20 blocks on the season, but none with more than 54 (which was Blake). While a new head coach can shake up the lineup, junior Maddie Douglas will be a favorite to start for A&M – among regular offensive contributors, she led the team with a .272 hitting percentage and had 49 blocks (1.11/set).

By taking a medical retirement, Blake will be able to keep her scholarship for her senior season, but won’t be eligible for further NCAA competition even if her medical condition changed.