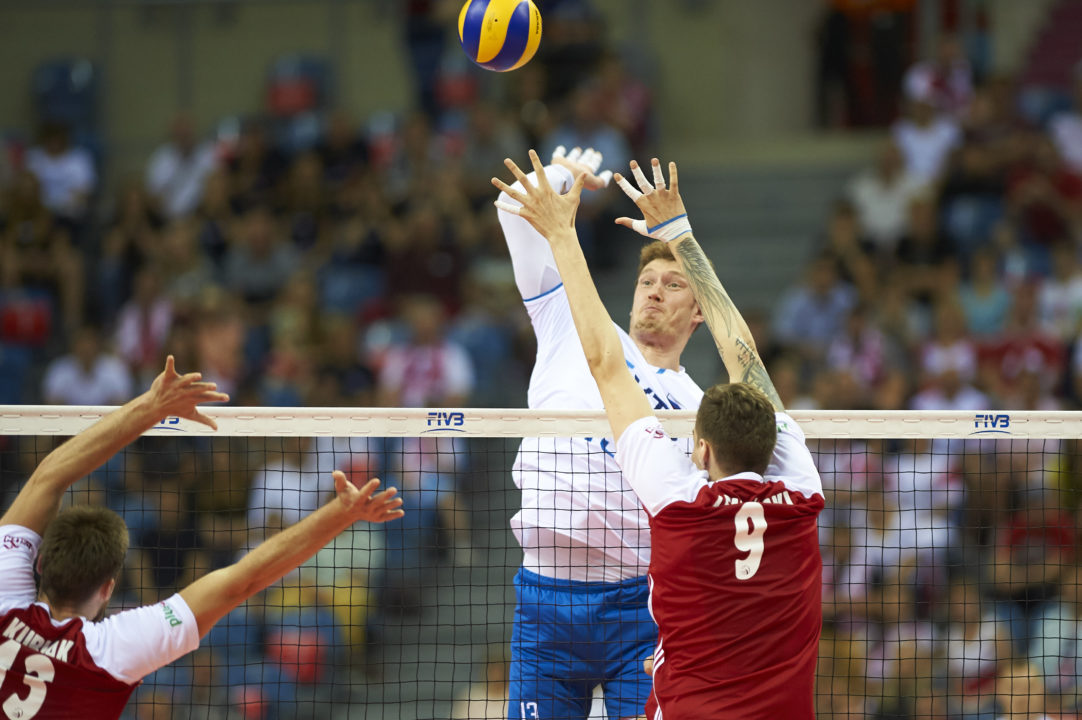 Dmitry Muserskiy produced one of the most dominating performances of the Volleyball Nations League. He and Russia will square off against Serbia, Bulgaria, and Australia in Pool 5. Current Photo via FIVB

After the first weekend of play there are 4 teams who remain unbeaten. Teams earn 3 points for a victory in 3 or 4 sets, 2 points for winning in 5 sets, and 1 point if they lose in 5 sets. Poland and France are the only teams earning a perfect 9 points out of the first 3 matches. Poland sits on top of the table right now since they only lost 1 set in their first pool and have a 9.000 sets ratio over France who lost 2.

When looking at Pool 5, Bulgaria and Russia are on the edge of qualification at this point with a lot more volleyball left to be played. Serbia may be far down on the table, but they likely faced their toughest pool in the first week when they had to play Italy and Brazil. They have a great chance to jump a number of spots when they leave Sofia this weekend.

This pool looks like it could be decided by the match between Serbia and Russia on June 2, 2018. It will be interesting to see what team Russia decides to out on the court.  They are strong at opposite with Konstantin Bakun or Victor Poleatev, but will they bring out Maxim Mikhailov now that he has gotten rest from the finish to his professional season with Zenit Kazan?  Will Artem Volvic make his debut in this competition?  Serbia will more than likely put forth their strongest team, as was their practice in the first weekend of play.   This could amount to a meeting of giants.

While they were almost embarrassed by China, Bulgaria come in with a favorable position in the standings and an upset win over Argentina last weekend.  It is true that they are without Tsvetan Sokolov, but they have a great deal of talent playing in top leagues around the world. Their biggest challenge will be overcoming inconsistency and the distrust of their federation to put a halt to their run of underachieving. It will be interesting to see if they utilize Nikolay Penchev more this weekend.

Australia will have a difficult time this weekend. While Luke Perry was one of the best passers of the first weekend, they were atrocious as a team in serve receive.  There is a very real chance they go into the third weekend of play without a victory.