The Swatch Beach Volleyball World Tour, which hosts the biggest (and most lucrative) beach volleyball series in the world, is headed... Current Photo via jhnnsstnbrg

The Swatch Beach Volleyball World Tour, which hosts the biggest (and most lucrative) beach volleyball series in the world, is headed to Hamburg, Germany for its 2017 finale the organization announced late last week. That’s the home down of the defending European, Olympic, and Swatch World Tour Champions Laura Ludwig and Kira Walkenhorst. The tournament will be held from August 22-27th

The tournament’s center court with be the Rothenbaum Arena in Hamburg’s Harvestehude quarter which is primarily a tennis venue and hosts 13,200 spectators. That same arena hosted its first major last year in June, where American Phil Dalhausser and Nick Lucena won the men’s draw, while the home-town pair won the women’s draw.

Hannes Jagerhofer, the CEO of the Beach Majors series, said “Last year’s tournament in Hamburg proved that beach volleyball in Germany is booming. We witnessed an unbelievable atmosphere and crowd at the Rothenbaum and we felt that turning a Major into the Swatch World Tour Finals would further enhance the feel-good factor of the sport in this country following Laura and Kira’s incredible success at the Rio Olympics.”

12 teams per gender will be invited to compete in the finals, including the top 8 pairs via the World Rankings and 4 wild cards. $800,000 worth of prizes are available at this year’s World Tour Finals, and comes just two weeks after the FIVB Beach Volleyball World Championships in neighboring Vienna, Austria.

This is the 3rd edition of the Swatch Major Series Finals and the first to be hosted outside of North America. The entire hosting progression is below:

The updated schedule and calendar is below (click to view full-screen): 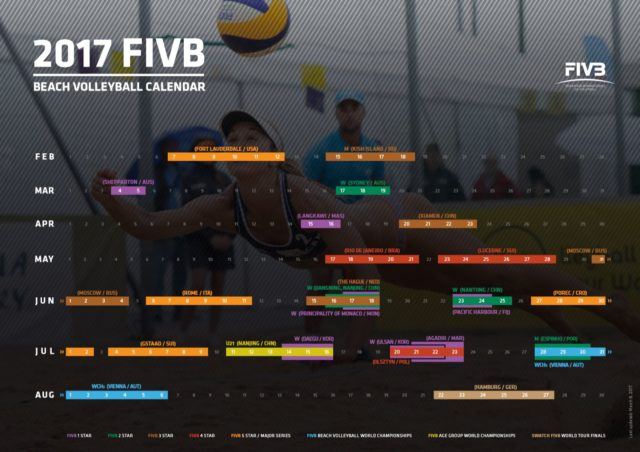