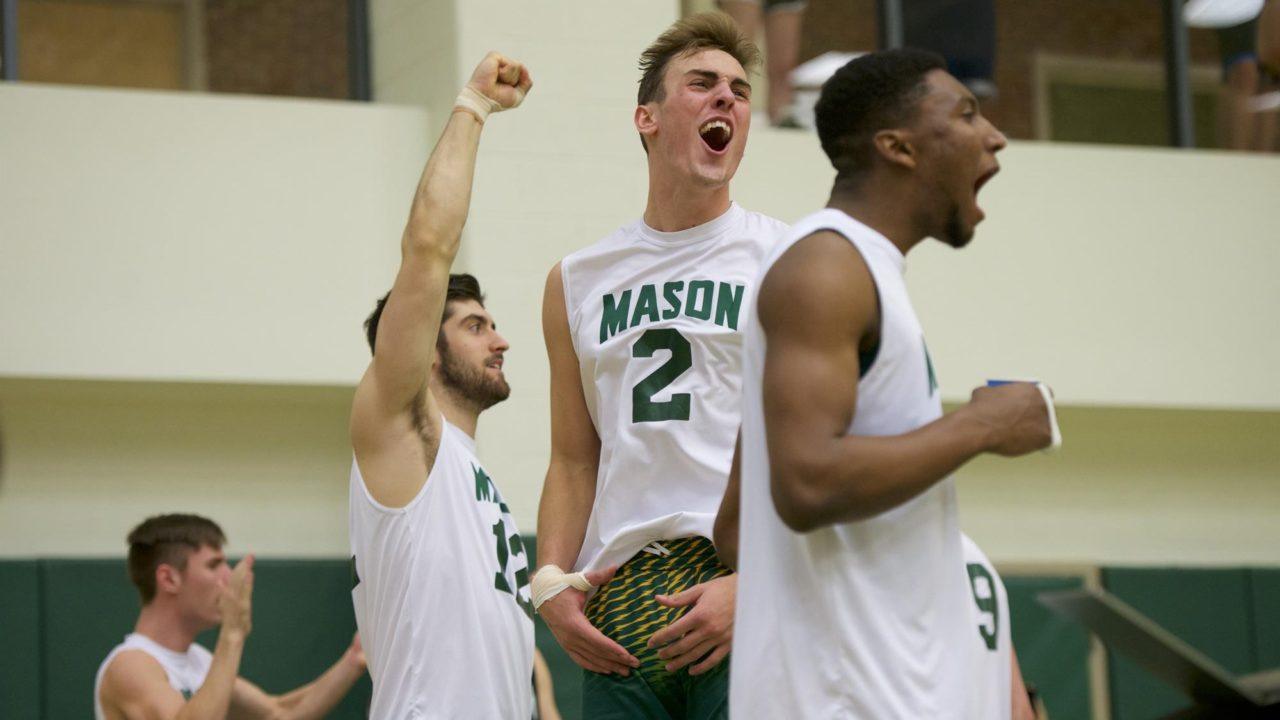 George Mason spent the weekend in California for the Long Beach State-hosted Asics Tournament and pulled off a big upset by sweeping #11 Cal State Northridge on Saturday night. While George Mason couldn’t hold down Northridge’s best-in-the-nation offense – George Mason had 39 kills and hit .276 while CSUN had 38 kills and hit .333 – 7 George Mason aces and 13 CSUN service errors was enough to swing the game in favor of the Patriots. Each of the 3 sets was won by the minimum 2 points.

With its first victory over a ranked opponent this season, Mason provided a more-than-proper response to Friday’s heavy loss to No. 2 Long Beach State.

Despite the final set score, the match at the iconic Walter Pyramid was a hard-fought battle from start to end. Six points were all that separated Mason and CSUN on the night as the Patriots won each of the sets with a two-point margin. It took extra points to determine a winner in the first two sets – 27-25 and 26-24, respectively – and the third came to end with the narrowest possible margin within regulation, 25-23.

“Our team showed resilience tonight and just flat out competed,” Mason head coach Jay Hosack said after his first win over MPSF opposition since he took over the program. “I am proud of them for responding after the prior night’s performance.”

Redshirt senior opposite hitter Jack Wilson returned to his normal self after a slow night against LBSU and paced the Patriots with 19 kills, two more than what the entire team had against Beach. The Patriots’ captain had five of Mason’s seven service aces and contributed 3 block assists and a dig defensively for match-high 25 points.

The final stats told the story of the contested nature of the match with four of the major statistics being decided by three or fewer in favor of one team: kills (39-38 Mason), assists (38-36 Mason), digs (17-14 CSUN) and blocks (10-9.5 CSUN). On the other hand, Mason dominated the aces category with the Matadors picking up only two.

The Patriots will now have a day of rest and practice before they complete their California adventure with a match at No. 14 USC on Monday.

The Matadors opened the tournament Friday with a tough five-set loss to No. 10 Loyola-Chicago before suffering just their third loss in 13 matches against unranked foes this season.

After playing just three of the five sets against Loyola on Friday, junior Arvis Greene rebounded to put down a match-high 19 kills on .406 hitting to go with five blocks against George Mason. Greene, who was named to the All-Tournament team, however was the only Matador hitter to reach double figures in kills as sophomore Dimitar Kalchev was limited to eight kills on .118 hitting. Kalchev did add one ace against the Patriots giving him 56 aces on the season, one from tying Eric Vance’s eight year old school record.

Sophomore setter Sam Porter handed out 33 assists to go with seven digs and freshman Kelsey Yogi made his collegiate debut at libero scooping up four digs along with one assist.

CSUN led by as many as three in the opening set as as a Patriot hitting error put the Matadors in front 12-9. But George Mason outscored CSUN 8-2 over the next 10 points to open up a three point lead of its own at 17-14. GMU still led by three at 18-15 when a pair of Patriot errors and a Porter ace pulled the Matadors even.

The score was tied six more times down the stretch, the last at 25-25 following a Chance kill, when a Jack Wilson kill and a Langston Payne ace gave GMU the 27-25 win.

A Greene kill put the Matadors in front 23-21 in set two before the Patriots answered with a kill and a block to knot the score. A Greene kill set CSUN up with set point at 24-23 but George Mason rolled off three consecutive points to take a 26-24 win and a two set lead.

The final set was equally tight as the two squads forged a 21-21 tie when Porter was whistled for a setting error. A GMU kill out of a Matador timeout gave the Patriots a two-point advantage 23-21 when CSUN called its final timeout. The Matadors pulled within one after a George Mason service error but an ensuing Patriot kill gave GMU match point at 24-22.

A George Mason hitting error saved one match point but Greene’s attack was stuffed by the Patriot block sending George Mason to the 3-0 sweep.

Wilson matched Greene’s 19 kills to lead the Patriots who improved to 8-10 on the season.

CSUN returns to MPSF play next week as the Matadors complete the home portion of the 2017 schedule against Pepperdine (Mar. 15) and Long Beach State (Mar. 17).