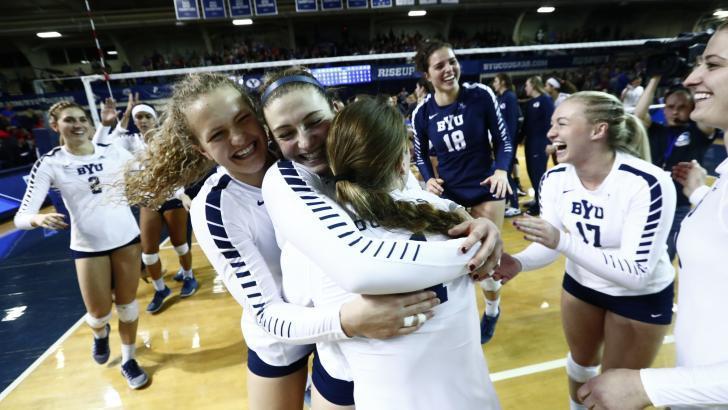 Author’s note: the following article has been edited to reflect an error.  Sarah Sponcil has transferred to UCLA for the upcoming season.

On VolleyMob’s 2016 Conference RPI Rankings, we listed the West Coast Conference as the 5th-best conference in the country, behind the “Big Four” conferences—the Pac 12, the Big 10, the Big 12 and the SEC; but ahead of the ACC. Even though only two teams, BYU and San Diego, qualified for the NCAA tournament in 2016, this conference still packs quite a punch. Below are our previews and predictions for who will represent the WCC this season as well as if they are capable of sending a third team to the NCAA’s come December.

BYU (29-4, 16-2) is the defending champ and has to find a way to replace AVCA First Team All-American Amy Boswell. All she did was finish in the top two in four different categories for the Lady Cougars, including 2.99 kills/set, 1.26 blocks/set, #2 in aces and hitting at almost a .400 clip. An additional loss of Whitney Young Howard, (1.98 kills/set, 1.16 blocks/set) will leave a gaping hole in the middle. San Diego (24-6, 15-3) will be looking to advance beyond the third round after being upset in round one of the NCAA’s to Baylor last fall. They’ll have to do it without WCC Player of the Year Lisa Kramer (4.21 kills/set), WCC 1st team All-Conference Lauren Schad (2.76 kills/set, hitting .410) and WCC 1st team All-Conference libero Hunter Jennings (#1 aces on USD, 4.05 digs/set).

If there ever was a time for another team to step in and be the third WCC team in the NCAA’s, it would be this season, and that team is LMU (19-11, 10-8). The Lions graduate 1st team All-Conference Jamie Lea (2.47 kills/set) and lost 2016 WCC Defender of the year in Sarah Sponcil as a transfer to UCLA. However, the other five starters return, including 2016 WCC All-Freshman team honoree Savannah Slattery. The Lions also pick up transfer Megan Rice from UCSB, who should make an immediate impact. Additionally, Tom Black took a new job at Georgia. Does new coach Aaron Mansfield have enough to contend?

Gonzaga (17-11, 10-8) is part of the log-jam that is the middle of this conference. However, graduating five starters (top four attackers and libero) might make the move to the top tougher in 2017. Portland (17-13, 10-8) have the reigning WCC Coach of the Year in Brent Crouch and graduate two attackers (Brittney Markwith and Katie Sullivan) and starting libero Monica Gajda. Pacific (15-15, 9-9) rounds out the middle of the pack, with their only graduation being their top attacker of 2016, Lexi Elman (3.5 kills/set).

BYU. I know, I know, it’s the safe pick. But until someone—ANYONE—can take the WCC from them, they stay in this position.

Sarah Sponcil has left to go to UCLA. LMU is not in as good of shape as you suggest.