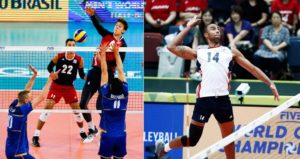 The United States used an entirely different starting lineup on Friday against Russia than the day before. John Speraw has now started all 14 players on his roster in the VNL Final Six.

Brazil’s Mauricio Borges is the latest injury casualty in Volleyball Nations League action, suffering an ACL tear in the team’s five-set loss to France on Wednesday.

Brazil went from the brink of elimination to the semifinals behind 8 blocks from Lucas Saatkamp. Who else has qualified and who else has a chance going into Friday?

The United States swept Poland as they join Brazil in clinching bids to the semifinals of the VNL.

With a 3-0 win over Poland, the United States qualifies for the VNL Semifinals with Russia in Pool B. Taylor Sander left the match with an injury late in the 3rd set.

Dmitry Kovalev and Russia are the first to qualify for the VNL semifinals. They clinched a spot in the semifinals when the United States took a 2-0 lead over Poland on Thursday.