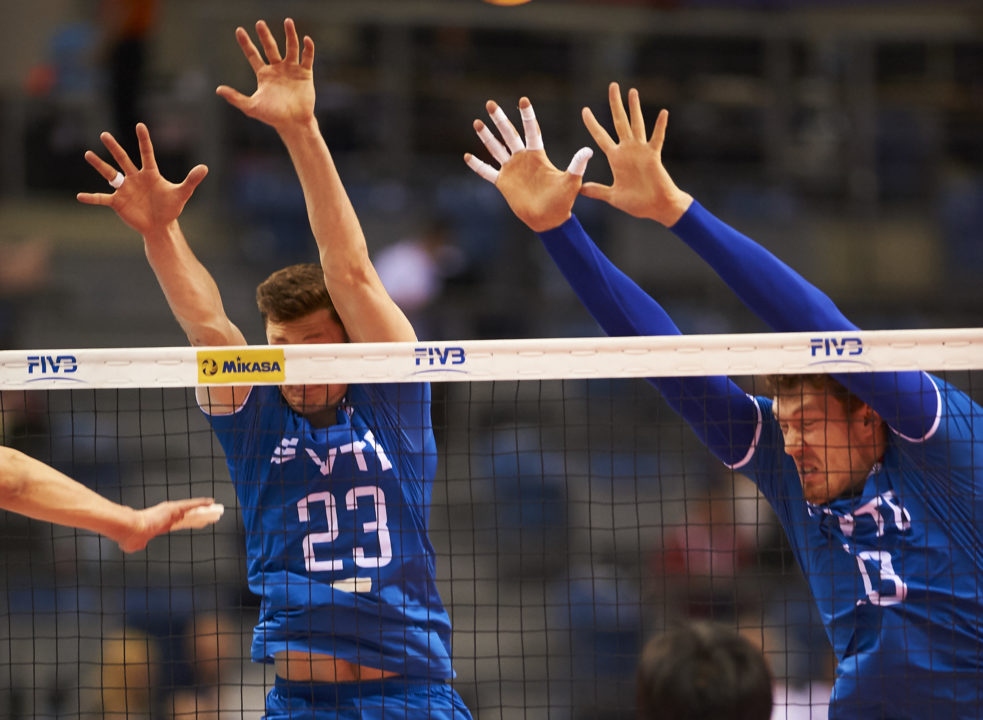 Seven service aces and 27 Canadian miscues lifted Poland past Canada and put the home team atop the Volleyball Nations League standings at 3-0 with the maximum nine points, meanwhile Russia put up 12 blocks to end any thoughts of a Korean upset to wrap Pool 3 play on Sunday. Current Photo via FIVB

Seven service aces and 27 Canadian miscues lifted Poland past Canada and put the home team atop the Volleyball Nations League standings at 3-0 with the maximum nine points.

Damian Schulz (16), Aleksander Sliwka (15), Jakub Kochanowski (15) and Michal Kubiak (14) split the scoring load for the Polish team. Sliwka downed a team-best 14 kills, while Schulz and Kubiak chipped in 13 and 11 respectively. Kochanowski put up a team-best three blocks and served up four aces alongside his eight putaways.

Canada struck first, going up 4-1 behind a pair of Graham Vigrass blocks and led at the first technical timeout, but fell apart as unforced errors gave Poland a 14-10 advantage, one which it held the rest of the way.

Kochanowski served up two aces in Set 2, the last to cap off a 26-24 win for Poland, ending a back and forth battle, which saw Canada lead 15-14 midway through. The Canadians had the first set-point try, but a kill and a block by Schulz gave Kochanowski the serve for the win.

Sclater served up an ace as Canada grabbed a 5-1 lead in Set 3. This time, however, the Canadians were able to hang on, going up 11-5 and holding on for the 25-21 victory to extend the match.

Trailing 4-1 in Set 4, Poland countered with an 8-3 run, including aces by Sliwka and Kubiak. By the second technical timeout, the Polish side led by five at 16-11. A challenge play brought Canada back within two at 18-16, but aces by Kochanoski and Schulz sealed the perfect weekend for Poland.

Russia put up 12 blocks to end any thoughts of a Korean upset to wrap Pool 3 play on Sunday.

Egor Kliuka was the top scorer for Russia with 13 points, utilizing all of his skills in the form of a team-best eight kills, three aces and two blocks. Konstantin Bakun and late substitute Ilia Vlasov also notched eight putaways, while Dmitriy Muserskiy and Anton Karpukhov downed six apiece. Muserskiy also was a major factor in the blocking game with a match-high five stuffs.

Jae-Duck Seo tried to do it alone for Korea with 15 points on 13 kills and two aces. Jiseok Jung chipped in seven points (6 kills, 1 ace) and Jae Hwi Kim followed with six (5 kills, 1 block). Five other players tallied at least one kill, but it was not enough to overcome the fourth-ranked Russians.

Russia boasted a 7-4 lead in Set 1 only to see Seo bring things into a 9-all tie. In the end, the back and forth battle, highlighted by Korean offense and Russian blocking, wrapped on a Korean miscue.

After a tie at 12 in Set, it was nearly all Russia. Kliuka took over the set with two kills and two aces to put his side up 17-13, giving the Russians a lead they would not relinquish. Muserskiy served up an ace and Kliuka downed another kill to cap the 25-21 win.

With the score tied at 4-all, Russia broke away with a 6-0 run on the serving arm of Bakun. Vlasov put the final stamp on a 25-15 win and the sweep.