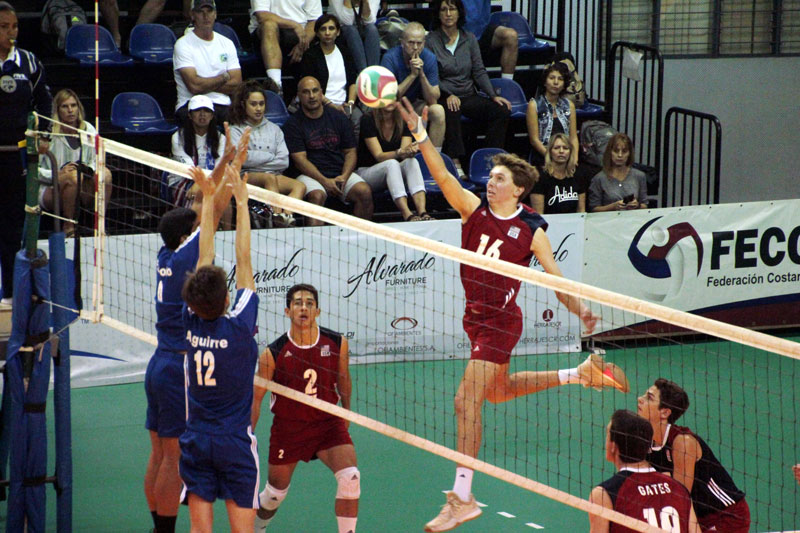 The U.S. Boys' National Team earned a sweep along with Cuba, setting up a battle for the Pool B title. Archive Photo via NORCECA

Costa Rica got their tournament started off on the right foot as the event’s host took down Nicaragua. Luckily for the Nicaraguan side, they are in just a three-team pool, so they will move on the quarterfinals – but will take on the loser of Cuba/USA. Costa Rica now will either advance on to the semifinals with another victory or take on the third place team of Group B since they won this match.

The attack and block proved to be the difference for Costa Rica, including a 16-6 edge in the latter. Dowshel McDonald and Deykel Smith each notched 15 points for Costa Rica, with Jefferson Guzman not far behind at 13. That was too much for Nicaragua and Marcial Sandoval (10 points) to overcome.

Costa Rica head coach Juan Acuña: “My boys are really motivated to be playing here at home, they were nervous and our game plan was well executed. We studied Nicaragua a lot, so our offensive was really effective for this positive outcome, even if Nicaragua pushed us out of balance in set two.”

Nicaragua head coach Jorge Mena: “Facing Costa Rica is always a good challenge; we were able to push hard but we couldn’t seal the win. My wing spikers weren’t effective enough and failed in set four closing. The tournament gets even harder with this loss.”

Team USA put up an even better performance in their second match than their first, where every set had good distance. Each set progressively earned a slightly larger victory too for the Americans, who seem to be getting stronger as the tournament goes on. Still, there was room for improvement with plenty Honduras points coming on United States’ errors, though they dominated the points from a kills, aces and blocking perspective.

Leading the way for Team USA was UCLA commit Alex Knight, who owned 13 points that included five aces. Scott Solan also added seven points, while Ethan Hill put up another strong outing with seven of his own. The red, white and blue will look to keep rolling into their next match against defending tournament champions Cuba.

USA head coach Brad Keller: “It’s excitement; tonight we were a little more settled and at the end of the day we continued to get better, which I’m fine with. We were good in serves, even though we missed a lot of them and our passing was good also”. Looking ahead of facing Cuba, “the two countries have a lot of pride, we both play are really good at volleyball; we’ll see good technicalities and big swings, just more exciting moments.”

Setter Matthew Gernat of Honduras: “United States has strength, they’re tall and they hit everything, we have lots to learn; we weren’t able to control their serves. Against Guatemala we want to play orderly and tactically while defending and attacking, we must be effective in serves.”

Cuba kept pace with the American side at 2-0 by winning all six sets thus far, just like Team USA. That sets up quite the meeting between Cuba and USA for the Pool B victory – although both teams have already clinched a spot into the quarterfinals now, with the winner of that match earning a bye to the semifinals.

The Cuban serve was too hot to handle for the Guatemalans and logged a 10-2 edge in aces. The block and attack also favored Cuba with wing spiker Jose Miguel Gutierrez (14 points), opposite Alexei Ramirez (seven points) and Victor Andreu (seven points) all prevalent.

Cuban head coach Mario Raul Izquierdo: “Our serves were strong and strategically directed to control Guatemala. My boys are motivated, they are in good physical conditions, most important of all is that nobody is injured; we will continue to face each match with conviction.”

Guatemala head coach Luis Fernando Castañeda: “They were impossible to receive, added to their strength, they were well positioned. Our captain Imalej is injured and we hope for his recovery for our more accessible opponents.”