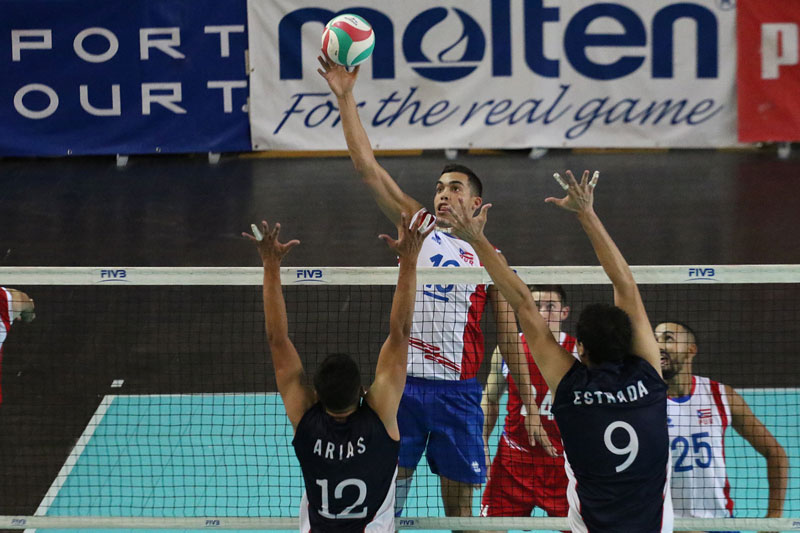 Puerto Rico took down Costa Rica while Cuba defeated Trinidad & Tobago to set up a clash atop the table between the two. Archive Photo via NORCECA

The 2018 Men NORCECA Challenge Cup is underway, as day three is now in the books. The event’s format, standings and results from the day with some analysis can all be seen below.

Puerto Rico continues to dominate their competition, moving to 3-0 and securing a spot in the final four. Costa Rica meanwhile will be in a dog fight for the last spot after another sweep loss.

Leading the way for the Puerto Ricans was Eddie Rivera (nine points) and Pedro Rosario (nine points), who once again showed the balance of their side. Costa Rica was a little better than their opener, but still struggled with middle blocker Jason Brown producing seven points with a lack of help.

Ramón Burgos, captain of Puerto Rico: “We all had the opportunity to play and we did well, however we have to keep improving, especially for tomorrow’s game against Cuba, which we came to win in. In the transition to convert those points, in front of the local rivals we have to defend and score, but happy with the results so far we have to prepare, the host team has strength, youth and a lot of power”.

Costa Rica captain Andrés Araya: “Despite the satisfaction for our performance is fine, we did not go from less to more like yesterday, but there are also factors that influence, for example, the serve varied drastically from the first to the second set, they served totally aggressive and that affected our reception and we could not combine the attack, but the spirit of the team was perceived as to keep fighting until the end.”

The theme of sweeps continued with Cuba downing Trinidad & Tobago, making all six matches thus far in the tournament three-set matches. The first showed the match had plenty of potential, but Cuba turned on the burners in the second and third and outscored their opposition 50-24 in the final two.

A key piece to the downfall in the final two was an injury to setter Donald Kameron for the Trinidadians. A roster that features no other setters was forced to play a wing-spiker at the setter spot, although it didn’t effect Ryan Stewart‘s day of 16 points. They just couldn’t find the balance that the Cubans had with Miguel David Gutierrez (nine points), Miguel Angel Lopez (seven points) and Javier Concepcion (seven points).

Cuban captain Liván Osoria: “Really in the first set they showed some resistance but we were catching our game little by little, we fulfilled the objectives and tomorrow we are coming for the victory against Puerto Rico. These two matches plus the preparation we have gone through and the experience of those of us who have played in foreign leagues, I think that gives us all the weapons and the drive to succeed.”

Sean Morrison, head coach of Trinidad and Tobago: “It was a very good match, my team was excellent in the first set, we even made five attacks that separated us from the opponents, but we needed to be more consistent and compared to the rival today there is no doubt that there is a big gap, we have to work more at this level to continue improving, and I love playing against Cuba because of its level and because I feel it as a family.”