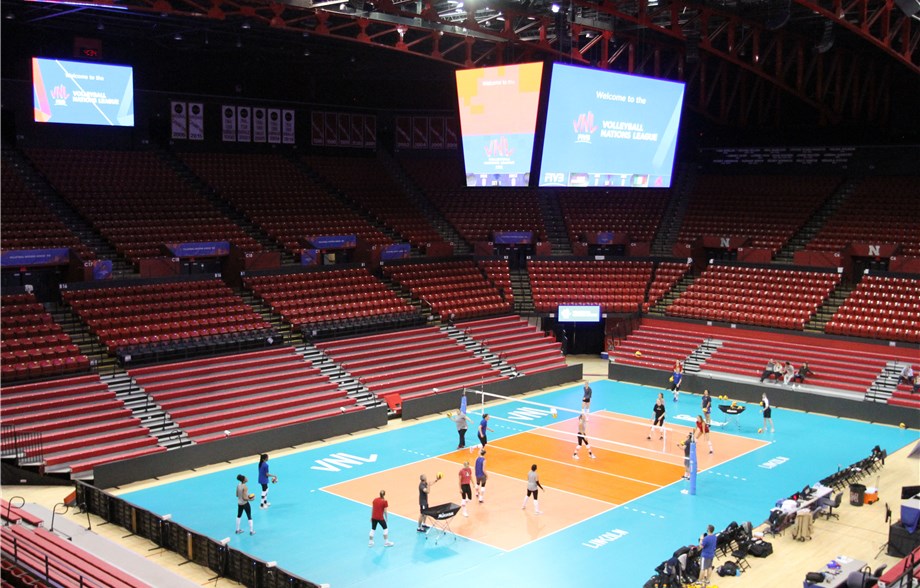 On paper, the United States is the favorite to win Pool 3 as the Americans boast home court advantage and are the most highly ranked of the four-team group. The youth of their three competitors also could be a major factor in the success of the Americans. Current Photo via FIVB

Entering the first week of play, all 16 teams in the Volleyball Nations League are on equal footing. As compared to its predecessor event the World Grand Prix, there are 4 more teams in the top tier of the Volleyball Nation’s League, and teams will play 15 instead of 9 games. In the WGP, it usually took between 13 and 16 points to qualify for the Final 6 (tending toward higher point tallies in recent years as there was less parity between teams).

This year, we’re projecting that it will take about 25 or 26 points to advance. so teams hoping to advance to the Final 6 will want to shoot for 2 wins-per-week.

On paper, the United States is the favorite to win Pool 3 as the Americans boast home court advantage and are the most highly ranked of the four-team group.

U.S. Women’s National Team coach Karch Kiraly is quick to point out that teams have had much less time to prepare for the VNL than typical international competitions, which usually begin in July.

“Every team faces the same challenge here in the fact this competition is starting weeks and weeks earlier than it has ever started before,” Kiraly said. “We have never started the year with an FIVB competition as early as May 15. Most years we start around early July. We all have adjustments to make and it will be a learning process in terms of what is the appropriate amount of rest. Most of our players, especially the ones who just got back this week, got very little of that rest.”

The advantage for the Americans is that the team is opting to include seven Olympians on its opening weekend squad, while its three competitors sport much less experienced sides.

With the World Championships awaiting in September, Italy, which was runnerup at the 2017 World Grand Prix, has opted for a younger roster for the first few weeks of the tournament, with seven players making their international debut, and it remains to be seen how that will affect the seventh-ranked side.

Head coach David Mazzanti said he plans to fill in his team as the weeks go on.

“Now the first target is to log more experience with the young players in the first and second preliminary weeks,” Mazzanti said. “After the second round I will call up the other players. I want to try and play with the first string of my players in the third, fourth and fifth rounds in Italy. For me, the first and second rounds are important for experience. The last three rounds are to improve our game and to try to play all the players on my team.”

Another team vying for younger options is Turkey, and in coach Giovanni Guidetti‘s own words, his squad may not be ready for what awaits in Lincoln.

“For us it will be a very interesting tournament because we are a pretty young team,” Guidetti said. “There are a lot of changes in the team. We lost a lot of very experienced players for Turkey. We will start with something new, we start with a new generation. We start with a new mentality with a lot of motivation and a lot of challenges ahead. But, of course, at the beginning we will face a lot of difficulties because for sure we are not ready for this level. We are here to learn and to become better every day.”

And finally, Poland is looking to stay in the tournament in the future as one of the four challenger teams in the field. A poor performance could bring relegation. Head coach Jacek Nawrocki said he is planning to go with experience for the first three rounds before including younger players once the team is back home for the final two rounds.

“First, our goal is to stay in the Volleyball Nations League for next year,” Nawrocki said. “We now have time for transformation. We have a couple strong players with experience who we have lost this year. We will play for more experience and to take another step to the next level of volleyball, to the top of the class.

“The core of this team has developed over two or three seasons. We have a group of experienced volleyball players who are proud to play for the national team. We also have a number of young and ambitious players. It means the final shape of the team hasn’t been decided and it will come down to how the girls play.”