No Egonu, Bosetti for Italy in Week 1 of Volleyball Nations League 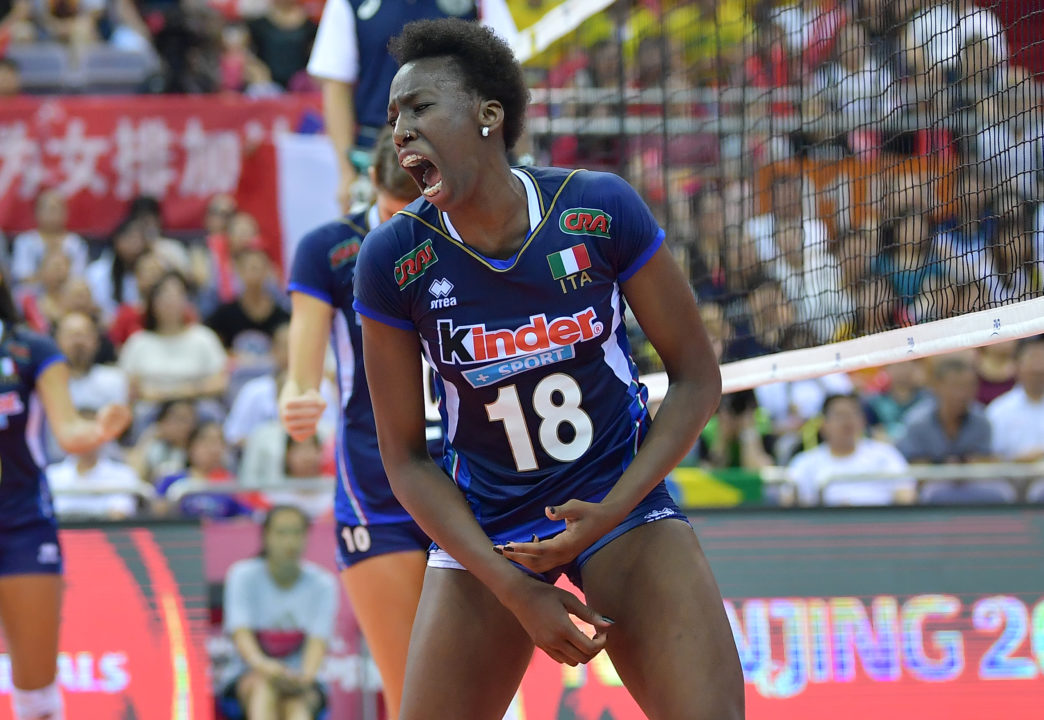 Italy will be without all but 2 of their players from last year's World Grand Prix final 6, including the absence of breakout teenage superstar Paola Egonu (above). Archive Photo via FIVB

Italy has named their 14-player roster for at least the first week of the 2018 FIVB Nations League where they will play in Lincoln, Nebraska this week. They’l play Turkey, Italy, and Poland in the first week of play.

The big news is that they’ve left Paola Egonu off their opening-week roster, with coach Davide Mazzanti holding true to his promise to rest their star players and use the first two weeks of the five week tournament to gain experience for new players to the team.

Last year, Italian captain Ofelia Malinov suffered an injury that cost her the European Championships, and it seems that Italy will give some of their players who went deep into the Italian Championship some extra recovery time before throwing them into the grueling 3-games-in-3-days schedule of the Nations League.

Egonu, who plays for Igor Gorgonzola Novara, led her team to the Italian Championship this season. That means that the pro year for the 19-year old opposite didn’t end until April 29th.

That leaves Italy without one of their star players, in a very challenging pool. Even as a teenager, Egonu was one of the stars of last year’s Grand Prix. She ranked 2nd among all scorers in points in the tournament (149) and was the most efficient hitter by more than 2 percentage points (49.80%).

Italy will be without the entire starting lineup from their gold-medal-match loss to Brazil (3-2) at last year’s Grand Prix, save for one: setter and captain Ofelia Malinov. They will likely be without starting middle blocker Raphaela Folie for a while – she suffered an injury in the Italian Championship final.

Libero Beatrice Parrochiale and outside hitter Myriam Sylla are the only players besides Malinov who will play this week and was on Italy’s 14-player roster for the Grand Prix Final 6 last year.

Italy’s named roster of 14 for the opening week is below.

RAISPORT – All the Italian races in the NVL will be b