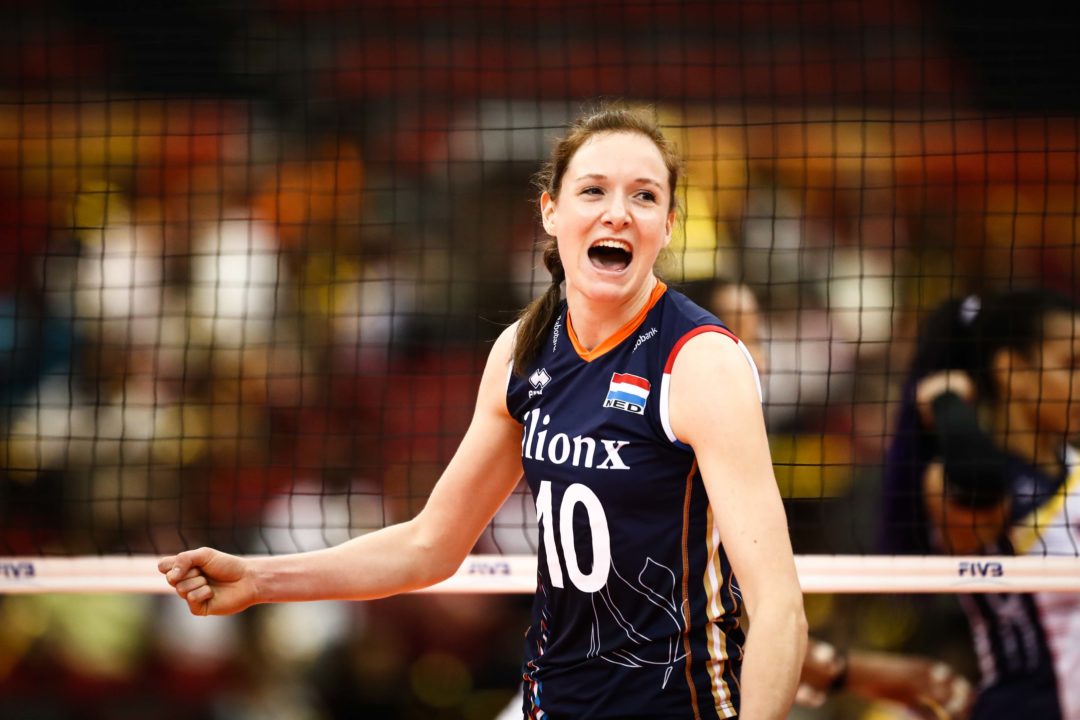 The first team, Serbia, clinched their spot in the Final 6 via a 3-0 sweep of Germany, while both pools have been whittled down to just 4 contenders each for advancing to the next round of the 2018 FIVB Women’s Volleyball World Championships.

Pool F doesn’t yet have any clinched teams, but 4 squads were eliminated on Monday: Thailand, Turkey, Bulgaria, and Azerbaijan (all 4 of those teams lost, including Turkey 3-0 to the United States in a Nations League rematch). After Tuesday’s off-day, the action really begins among the top 4, with Italy and Russia playing on Wednesday, and then China versus the United States. Nobody can technically be eliminated at that point, but if only one of Russia or China wins their match, the other will be hanging on by a thread at that point.

In leading the Netherlands to their 7th win of the tournament in 7 matches, Dutch opposite Lonneke Sloetjes made sure that the Netherlands didn’t have the same near-letdown against the Dominican Republic as Japan had a day earlier.

The Dominicans were able to contend with Japan when Japan’s service game failed in the 2nd set. While Japan recovered to win a tie-breaker, it exposed a strength of the Dominican team and a weakness of Japan: the Dominicans, with big blockers and big offensive weapons, can play with anybody in the world when they have the opportunity for clean passes.

Sloetjes had a big statline in every way (23 points in just 3 sets, 68% hitting), but the key was her 5 aces, which kept the Dominicans on their heels throughout the match.

In another day without many competitive matches, the Russians and the Bulgarians came the closest to that in their 4-setter in Osaka.

Bulgarian coach Ivan Petkov was quite critical of his team’s performance after their loss on Sunday, and while his team certainly performed better on Monday, he still wasn’t happy, saying “we did not have a lot of focus on the court” and “we did not make good tactical decisions.”

Quote of the Day:

German coach Felix Koslowski raised some eyebrows with his post-match comment that the Serbian women, who still haven’t lost a set, were “playing more like men’s volleyball now.”

Referring to their precision, high-leaping, and strength, Koslowski was almost in awe of how well the Serbians performed in a 3-0 win over his team. The full quote:

“They are on the peak now. They are playing more like men’s volleyball now. I hope they can keep that level. The first two sets were difficult. They only had one unforced error. Even with a good serve we could not win. They pushed hard in the third set and wanted to win 3-0. We still need experience in that situation.”

Serbia is in, Germany, the DR, Puerto Rico, and Mexico are out. That leaves 3 teams for 3 spots. With Brazil being a game back in the wins column and still having to play the Netherlands and Japan, they look like they’re in hot water. Japan has to play Serbia and Brazil still, too, so Brazil isn’t totally out, but they again didn’t look great against Mexico on Monday, so this might come down to that last match of the pool, Japan vs. Brazil, to see who advances. A Brazil upset over the Netherlands, though, creates some chaos, because the Dutch still have to play Serbia on the final day of competition.

The Italians showed their class on Monday by being the first team to really dominate an injury-riddled Thailand in this tournament. Still waiting for the big bang to end Pool F: None of the top 4 teams have played a match against another of the top 4 teams in the 2nd round yet.

All times below in local Tokyo time: