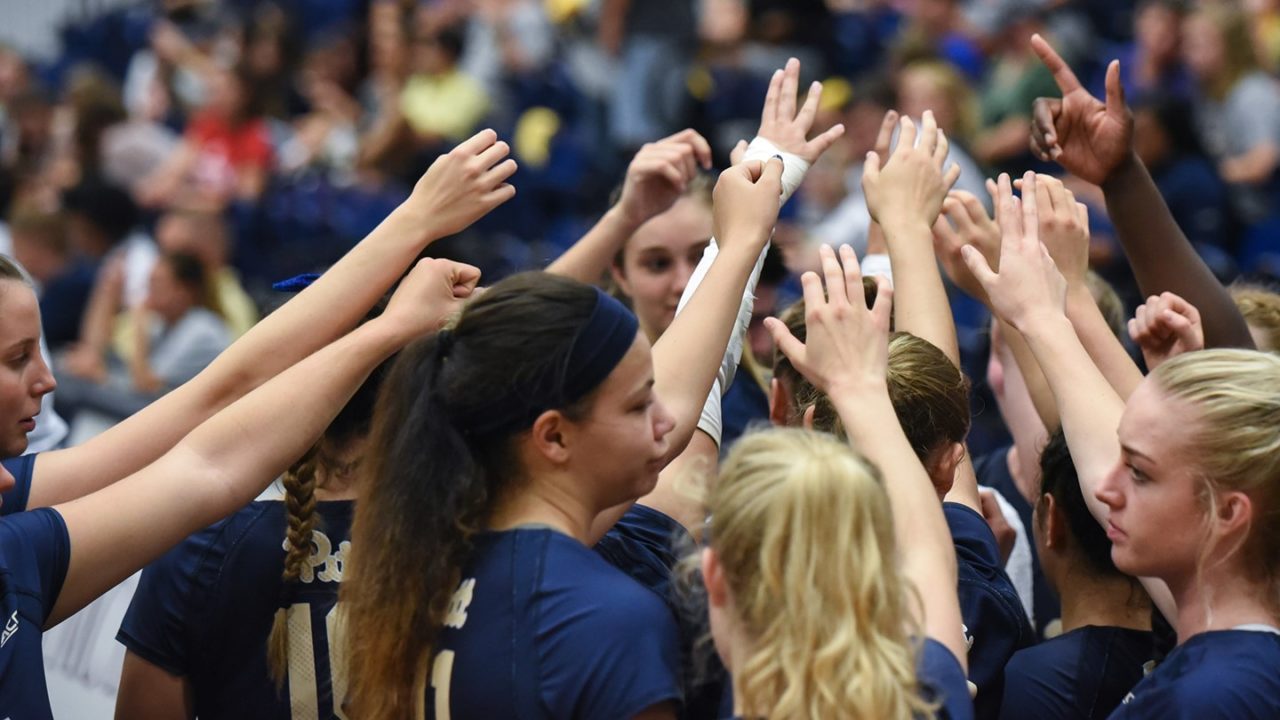 Pittsburgh stayed perfect on the year and in ACC play with a quick sweep of Notre Dame on Friday behind double-digit kill tallies by Nika Markovic (16), Layne Van Buskirk (14) and Kayla Lund (10). Current Photo via Pittsburgh Athletics

Notre Dame put up five blocks in the opening stanza, but it was not enough to steal away the set. The teams tied 11 times in the first half of the set, last at 14 all. The Irish scored four in a row after that, including a kill and a block by Morningstar and Bent to go up 18-14. Down 21-17, Pittsburgh rallied with five of the next six points, with two kills apiece by Markovic and Williams, knotting the score at 22. The Panthers finished off the comeback with three straight points, all by Van Buskirk (two kills, one block), to win 25-23.

Notre Dame could not get out of its own way in Set 2, hitting just .057, making three service errors and allowing Pitt three aces. The Panthers carried the momentum into the stanza, going up 7-2 including two Irish errors and two Van Buskirk putdowns. Notre Dame was within one at 12-11, but that sparked a 4-1 Pitt run, pushing the score to 16-12 behind three Van Buskirk kills. Up three at 16-13, Pittsburgh broke away, ending the set on a 9-4 run. The Panthers had set-point at 24-15 after a Lund ace, but a servicer error and attack error kept things going. An Irish hitting miscue capped the 25-17 win.

The teams split the first 22 points of Set 3, before Pittsburgh went up 16-12 on a Kamalani Akeo ace to cap a 5-1 run. The Irish rallied to within three at 19-16, but it was nearly all Panthers from there. Pitt scored five of the next six, with help from two kills and a block by Van Buskirk, to earn a match-point try at 24-17. Bent thwarted the first attempt with a kill, but Lund answered with her 10th of the night to wrap up the sweep.

Pittsburgh returns to action on Sunday as Louisville comes to town. It marks the Panthers’ first match against a ranked foe since facing Washington on Sept. 8. Meanwhile, Notre Dame moves on to face Virginia on Sunday.

No. 6 Pitt sweeps the Irish at a packed Fitzgerald Field House.#OwnIt • #H2P pic.twitter.com/8jIs2YpETL