Charlotte Goes the Distance for Record 11th Time in 2018 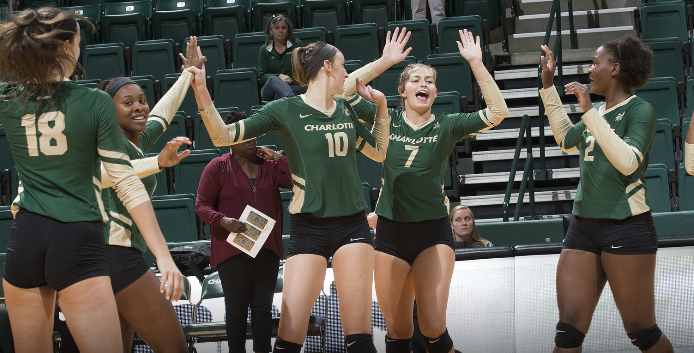 “I thought we did a great job tonight,” began Head Coach Karen Weatherington. “It wasn’t the peak of our play tonight. We didn’t have everything clicking the way we would have liked, but I love that we found ways to find points. We endured and battled back, that’s all you can ask for this time of year. It’s hard to walk away knowing the ball didn’t fall on our side, but I was really proud of the position we put ourselves in.”

UTSA (15-5, 7-1 C-USA) fell behind 4-0 in the opening set after a pair of Yumi Garcia aces along with the first kills of the night from Reeana Richardson and Tyra Galloway. Trailing 9-4 after a Sydney Rowan kill and needing a timeout, the Roadrunners began their rally with an ace from Amanda Gonzales, kill from Hannah Lopez and Niner error to tie the set up 13-13. In the midst of a 7-0 run, UTSA made it a 17-14 advantage on a Kara Teal kill before Rowan trimmed the deficit to one with a kill at 17-16. From the one-point margin, UTSA closed out the first on an 8-3 run to take a 1-0 match lead.

Charlotte (13-11, 3-5) evened the match in the second grabbing another 4-0 head start thanks in part to a Nya Steele ace, scoring an eventual 25-18 win. Two kills from Jocelyn Stoner helped move the lead to 9-4 before a UTSA timeout. Richardson kept the pedal down for Charlotte with a kill to make it 16-7 until a 22-11 margin opened up after another late Stoner kill. Taking advantage of a handful of mistakes by the visitors, Richardson emphatically closed out the set with a final kill to make it a 1-1 match.

The night took another intense C-USA leap forward with a thrilling 26-24 win for the Niners grabbing that 2-1 advantage. UTSA carried a 15-12 lead after a Teal put down until Richardson threw down back-to-back kills to make it 15-14. Sofie Perrens followed with an ace, Galloway delivered with a solo block and all of a sudden, the Roadrunners needed a timeout down 16-15. The middle set of the night remained back-and-forth to the end until a 24-all tie was broken by a Richardson kill and Galloway/Steele block shot momentum in favor of Charlotte.

UTSA came out firing on all cylinders snagging a 7-2 lead after another Gonzales kill maintaining a healthy lead until the Niners made things interesting late in the set. A kill from Molly Shaw off the bench, one of two solo blocks from Stoner and another Richardson kill tightened things up 23-16. A Galloway block with Jannelle Curtiss soon made it 24-19, but Teal made up for a previous error with the set-clinching kill to set up the fifth.

The roller coaster ride of the fifth started with a 3-0 Charlotte lead, saw UTSA take a 10-7 lead, the Niners rally to a 13-11 lead again, but a final 4-0 burst by the Roadrunners decided the night. Stoner and Galloway kills helped grabbed the early lead while Teal and Lopez turned things around for UTSA. Rowan and Richardson led the comeback charge with three UTSA errors to make it a 13-11 lead until the visitors made the last push of the night. Brianna McCulloch converted the second-to-last kill of the night while a couple of 49er hitting errors and the final kill of the night by Kirby Smith handed UTSA a 3-2 victory.

UTSA was led by Lopez’s 17 kills as one of five players in double digits. Richardson led all hitters with 19 kills for Charlotte. Steele assisted 45 times with 15 digs while Garcia paced Charlotte with 26 digs. The Niners tied a season-high with 18 team blocks, eight more than UTSA’s 10, and held the Roadrunners to a hitting percentage under .200 for the final four sets.

“Tonight was a tough one even though we blocked well,” finished Weatherington. “We have to let this go and try to steal that one back with lost here against FAU.”

Charlotte will wrap up the weekend on Sunday afternoon with a 12:00 p.m. match up at Florida Atlantic. Both teams engaged in a five-setter in Charlotte back on September 30th. Live video/stats will be available at http://www.charlotte49ers.com.