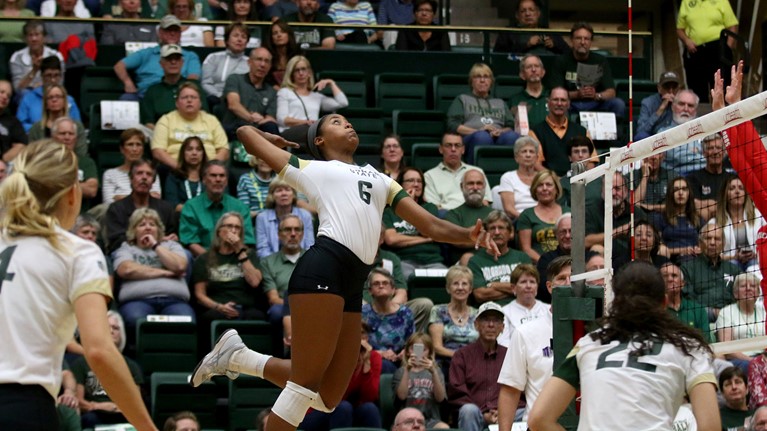 Senior Jasmine Hanna led all attackers with an impressive 12 kills, hitting .385 and adding 2 blocks. Kirstie Hillyer added 8 kills (hitting .538) and a match-high 5 blocks. Paulina Hougaard-Jensen added 6 kills on 9 errorless swings (.667) and added 2 blocks of her own. Katie Oleksak continues to run the most efficient offense in the Mountain West Conference, dishing out 34 assists. Her full stat sheet contributed in multiple ways; she added 4 digs, 3 kills on 3 swings, 2 blocks and an ace. Libero Amanda Young added a match-high 9 digs.

To keep the match competitive, Air Force brought pace with their serve, something Colorado State’s head coach Tom Hilbert was quoted as saying that the Rams haven’t seen before.

“Air Force did a nice job of driving their serves and we needed to see that.” He continued, “I feel like we could have played better in some areas and I would really like to play them again. That kind of driving serving is what we need to see.”

The Falcons actually outaced the host Rams, 7-6. Three of those aces came from setter Shanleigh Conlan, who distributed 27 assists and added a team-high 7 digs to the match. Offensively, Air Force was led by Denise Ssozi with a team-high 11 kills, hitting .333 on the night. Her 11 kills accounted for more than one-third of Air Force’s offense at the net.

The loss was the first time the Falcons were swept in almost a month (September 30, hosting Colorado State). Colorado State is now 4.5 games ahead of second-place San Jose State and Wyoming (both teams are 7-4 in conference play) with 6 Mountain West Conference matches remaining.

Since their last loss to Colorado in five sets on September 16 in Moby Arena, Colorado State’s 12-match win streak includes a 36-5 record in sets in those matches. Their only other loss this year was to Duke at home to open the season.

FORT COLLINS, Colo. – The No. 20 Colorado State Rams picked up their 12th consecutive win and ninth sweep in Mountain West Conference play Thursday night with a 3-0 victory over Air Force in Moby Arena. CSU remains undefeated against conference opponents and improves to 22-2 on the season. The win was also the 48th consecutive win against the Falcons, dating back to the 1995 season.

Jasmine Hanna led the Rams flooring 12 kills while hitting at a .385 clip. Kirstie Hillyer and Breana Runnels also added eight kills apiece, while Paulina Hougaard-Jensen led the team in efficiency, swinging at a .667 mark with no errors in nine swings. Katie Oleksak paced the offense dishing out 34 assists and Amanda Young led the defense with nine digs as Hillyer controlled the net recording five stuffs of the eight blocks for the Rams.

CSU cruised out to an early 6-2 lead – on they would not lose – in the first set. Air Force came within five points at 24-19, but Colorado State finished the set with a block by Hillyer and Hanna. The Falcons battled back in the second frame taking an early 3-0 lead. From there, the score was tied up four different times including at 10-10 before the Rams took over. CSU went on a 12-5 run to take a 22-15 lead following an Air Force timeout and finished the set, 25-22, to take a 2-0 match lead. Following the intermission, Colorado State took an early 6-3 lead and never looked back. The Rams held the Falcons to a match low .133 hitting percentage and gave up just 10 kills. CSU tallied six-straight points to close the match handedly, 25-15.

The Rams will remain at home next week for two Mountain West Conference matchups, starting with Utah State on Thursday, Nov. 2 at 7 p.m.

IN THEIR WORDS…
Tom Hilbert‘s opening statement…
“We were almost done with the third set and I thought that if we didn’t have our service aces, we would be tied. It turns out they hit .370 against us in the first set before we started blocking better in sets 2 and 3. That made a huge difference. Air Force did a nice job of really driving serves and we needed to see that. Katie (Oleksak) distributed the ball well, Jasmine (Hanna) played great and both of our middles had big numbers.”

Hilbert on if the team played better as the match went on…
“I feel like we could have played better in some areas and I would really like to play them again. That kind of driving serving is what we need to see. I thought that we were starting to get used to that towards the end of the match.”

Hilbert on Jasmine Hanna‘s senior year so far…
“You see a lot of people through their careers and get to their senior year and have transformational years. I think that is happening with Jasmine. She is playing great, night in and night out. She is in great shape and she’s never been tired. This is what senior year should be like. She worked very hard in the off-season and its showing.”

Hilbert on what the Rams need to do to get better as the season comes to an end…
“We have to start thinking about how we control our game. We need to understand how we can be consistent night after night.”

Jasmine Hanna on how she feels about her consistently good play…
“I think that consistency has been my game. Sometimes I wish I could incorporate more power in my hits, but at the end of the day, I am going to be consistent. It helps me because I know that Katie (Oleksak) is going to always give me a good ball as well.”

Kirstie Hillyer on if adjustments were made at the net or if the team was just able to execute better as the match went on…
“I think that we just had better execution. After the first set, we knew we needed to turn it around. I think we just were able to pick up our blocking game and that made the difference.”

FORT COLLINS, Colo. – The Air Force volleyball team suffered a 3-0 loss to 20th-ranked Colorado State tonight (Oct. 26) in Fort Collins. The Falcons, which suffered their first three-set loss in nearly a month, fell in straight 19-25, 22-25, 15-25 sets to the Rams, which remained undefeated in conference action.

Junior Shanleigh Conlan led the team in assists (27), aces (three) and digs (seven), while sophomore Denise Ssozi tallied 11 of the team’s 32 kills on .333 hitting (11k-2e-27a). Senior Piper Heineck and junior Lauren Heldt rounded out the team’s stat leaders, as the pair each recorded a pair of assisted blocks.

Heineck tallied the Falcons’ first point on the night’s second play, but the Rams took an early 7-3 lead. Junior Abigail Miksch registered a service ace, as she helped Air Force pull within two at the 9-7 mark, but Colorado State responded with the next four points to take a six-point lead. Kills from Heineck and Heldt put the Falcons in double figures (10-15). Miksch and Ssozi each registered a pair of kills, while Heineck and Conlan collected service aces, but the Rams took the opening set 25-19.

Miksch put down a pair of scores to help Air Force score the first three points of the second set, before Colorado State came back to even the set at four. The squads traded the next six points, with a kill from Ssozi and an ace from junior Sarah Hellman accounting for tying scores. An attacking error by CSU gave Air Force a two-point lead (9-7) and forced Colorado State into a time out. Following a 10-all tie, the Rams scored five of the next six points to go up 15-11. Colorado State took a 22-15 lead, before Air Force rolled off four straight points, including a Conlan ace, Ssozi kill, Heineck/Heldt block, to pull within three. Another block by Heineck and Heldt put the Falcons at 20 points, but CSU took the set, 25-22.

Air Force struck first in the third set, as Conlan (ace), Ssozi (kill) and Heineck (kill) gave Air Force a 3-1 lead, but Colorado State responded with the next five points to go up by three (6-3). An ace from freshman Jordan Daniels (7-6) and a kill from Miksch (8-7) kept the Falcons within one, but the Rams scored seven of the next 10 points to go up by five (15-10). Ssozi (two) and freshman Kathleen Medill (one) added kills, but the Rams took the set by a 10-point margin (25-15).